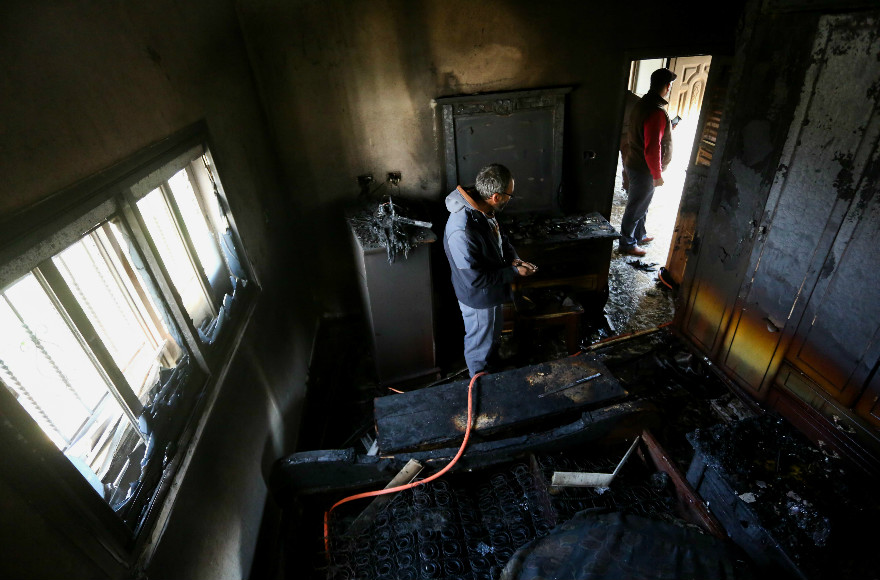 Local residents survey the inside of a burnt out house in the Palestinian village of Duma on March 20, 2016,beloning to the only witness to a July 2015 arson attack allegedly by Jewish extremists that killed three members of one family. (Photo/Flash90)
Advertisement

JERUSALEM (JTA) – Arson was not the cause of a fire that damaged the Duma home of a key witness in a deadly attack last year in the same West Bank Palestinian village, police believe.

Ibrahim Dawabsheh, the owner of the house, and his wife escaped from the burning home early Sunday morning and were treated in a West Bank hospital for smoke inhalation, the Palestinian Maan news agency reported.

He is the key witness to the July 2015 attack that killed his relatives Reham and Saad Dawabsheh, and their 18-month-old son, Ali Saad, and seriously injured Ali’s older brother. Ibrahim Dawabsheh is testifying in the murder trial of the suspected bomber, Amiram Ben-Uliel, 21, and his 17-year-old alleged accomplice.

The Israel Police and the Shin Bet security service, who are investigating the early Sunday morning fire, said in a statement issued that night that investigators have not found any indication the attack was nationalistically motivated or any evidence it was an arson attack. Some details of the investigation remain under a gag order.

“The findings so far at the scene are not consistent with the characteristics of a deliberate arson attack by Jews,” the joint statement said.

Palestinian officials have said they believe the attack on the home, which is located about 10 yards from the house that was burned down last year, was arson.

A bedroom window in the house was broken, with shattered glass inside, the French news agency AFP reported, citing local residents.

“The window was broken from the outside and flammable materials were found in the rubble,” Col. Malek Ali, fire chief for the nearby city of Nablus, told AFP.

“The way they attacked, the type of firebombs and the timing of the attack, all indicate that it was Israeli settlers,” he said.

Robert Piper, the United Nations coordinator for humanitarian assistance and development aid, in a statement condemned what he called the “arson attack by suspected Jewish extremists.”

“This violent act could easily have resulted in a more tragic outcome, as did the heinous terrorist attack last July on the home of Mr. Dawabsheh’s relatives in the same village,” he said.