Bernie Sanders: ‘All options’ on table if Iran cheats on nuclear deal 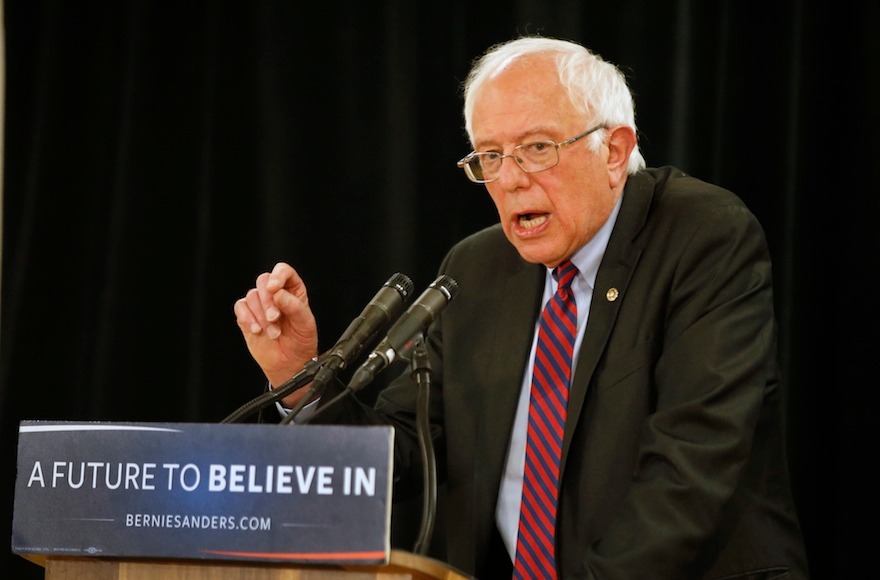 (JTA) — In the text of the speech Bernie Sanders would have delivered to the AIPAC conference, the Vermont senator laid out his vision for resolving the Israeli-Palestinian conflict.

In a rare foray into foreign policy, Sanders said peace would require recognition of Israel’s right to exist and the end of threats to its security. But it would also require the end of the Israeli occupation and “pulling back settlements in the West Bank.”

“It is absurd for elements within the [Prime Minister Benjamin] Netanyahu government to suggest that building more settlements in the West Bank is the appropriate response to the most recent violence,” Sanders said. “It is also not acceptable that the Netanyahu government decided to withhold hundreds of millions of Shekels in tax revenue from the Palestinians, which it is supposed to collect on their behalf. But, by the same token, it is unacceptable for President [Mahmoud] Abbas to call for the abrogation of the Oslo Agreement when the goal should be ending the violence.”

Sanders is the only major party presidential candidate not to appear in person at the American Israel Public Affairs Committee’s policy conference this week in Washington, D.C. Citing the demands of his campaign schedule, Sanders sought to address the conference remotely, but was turned down by AIPAC, though the organization had made the accommodation to other presidential candidates in years past.

The speech Sanders released Monday in lieu of a personal appearance dealt at length with the Israeli-Palestinian conflict. Sanders noted his personal ties to Israel, including the time he had lived on a kibbutz, and committed to assuring Israel’s survival and security. Sanders also condemned Hamas’ attacks on Israeli civilians.

But he reiterated his criticism of Israel’s 2014 military campaign in the Gaza Strip and said peace would require ending the blockade of the coastal strip and ensuring Palestinian self-determination and control of their natural resources, especially water.

Turning to other regional challenges, Sanders repeated his past support for the Iran nuclear deal, insisting that for all its flaws it represents the best hope of denying Iran a nuclear weapon.

“I do not accept the idea that the ‘pro-Israel’ position was to oppose the deal,” Sanders said. “Preventing Iran from getting a nuclear weapon will strengthen not only America’s security, but Israel’s security as well. And I am not alone in that idea. While Prime Minister Netanyahu is vocally opposed to the accord, his is hardly a consensus opinion in Israel. Dozens of former security officials, including retired Army generals and chiefs of the Shin Bet and Mossad intelligence agencies support the agreement.”

Sanders said if Iran did not abide by the agreement, sanctions should be reimposed “and all options are back on the table.”

Repeating an idea he has expressed in debates with Democratic front-runner Hillary Clinton, Sanders said that countries in the region had to take the lead in countering the Islamic State.

“Now, I am not suggesting that Saudi Arabia or other states in the region invade other countries, nor unilaterally intervene in conflicts driven in part by sectarian tensions,” Sanders said. “What I am saying is that the major powers in the region – especially the Gulf States – have to take greater responsibility for the future of the Middle East. What I am saying is that countries like Qatar – which intends to spend up to $200 billion to host the 2022 World Cup – can do more to contribute to the fight Against ISIS. They have $200 billion to host a soccer event, yet have done very little to fight ISIS.”