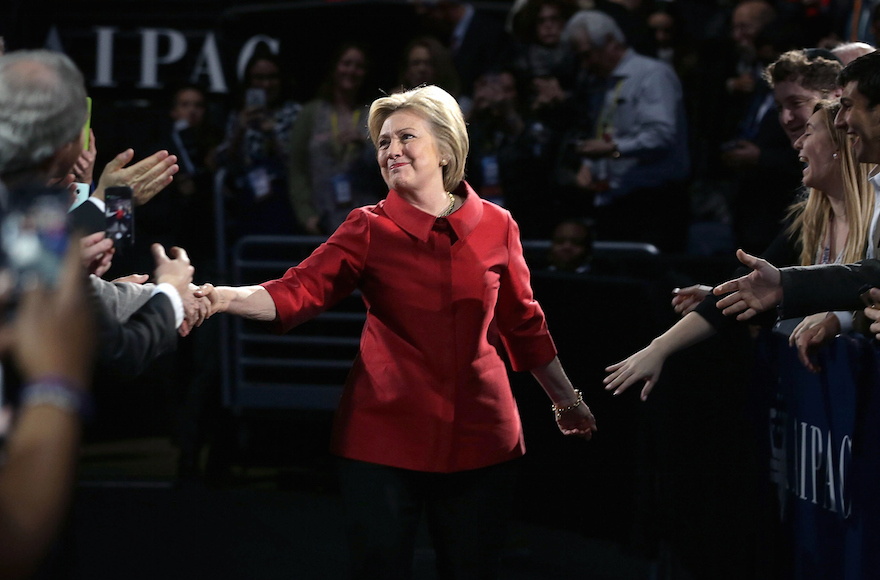 On being America’s first female president: “Some of us remember a woman, Golda Meir, leading Israel’s government decades ago and wonder: What’s taking us so long here in America?”

On Yitzhak Rabin’s smoking habit: “Since my first visit to Israel 35 years ago, I have returned many times and made many friends. I have worked with and learned from some of Israel’s great leaders — although I don’t think Yitzhak Rabin ever forgave me for banishing him to the White House balcony when he wanted to smoke.”

Clinton will invite Benjamin Netanyahu to the White House: “We will never allow Israel’s adversaries to think a wedge can be driven between us. As we have differences, as any friends do, we will work to resolve them quickly and respectfully … One of the first things I’ll do in office is invite the Israeli prime minister to visit the White House.”

She slams Donald Trump (albeit not by name): “We need steady hands, not a president who says he’s neutral on Monday, pro-Israel on Tuesday, and who knows what on Wednesday, because everything’s negotiable. America can’t ever be neutral when it comes to Israel’s security or survival … Some things aren’t negotiable. And anyone who doesn’t understand that has no business being our president.”

Fight the BDS campaign against Israel: “Many of the young people here today are on the front lines of the battle to oppose the alarming boycott, divestment and sanctions movement known as BDS. Particularly at a time when anti-Semitism is on the rise across the world, especially in Europe, we must repudiate all efforts to malign, isolate and undermine Israel and the Jewish people. I’ve been sounding the alarm for a while now. As I wrote last year in a letter to the heads of major American Jewish organizations, we have to be united in fighting back against BDS.”

Why she supports the Iran nuclear deal: “Today, Iran’s enriched uranium is all but gone, thousands of centrifuges have stopped spinning, Iran’s potential breakout time has increased and new verification measures are in place to help us deter and detect any cheating. I really believe the United States, Israel and the world are safer as a result. But still, as I laid out at a speech at the Brookings Institution last year, it’s not good enough to trust and verify. Our approach must be distrust and verify. This deal must come with vigorous enforcement, strong monitoring, clear consequences for any violations and a broader strategy to confront Iran’s aggression across the region. We cannot forget that Tehran’s fingerprints are on nearly every conflict across the Middle East, from Syria to Lebanon to Yemen.”

A Purim shout-out: “On Wednesday evening, Jews around the world will celebrate the Festival of Purim, and children will learn the story of Esther, who refused to stay silent in the face of evil. It wasn’t easy. She had a good life. And by speaking out, she risked everything. But as Mordecai reminded her, we all have an obligation to do our part when danger gathers …”