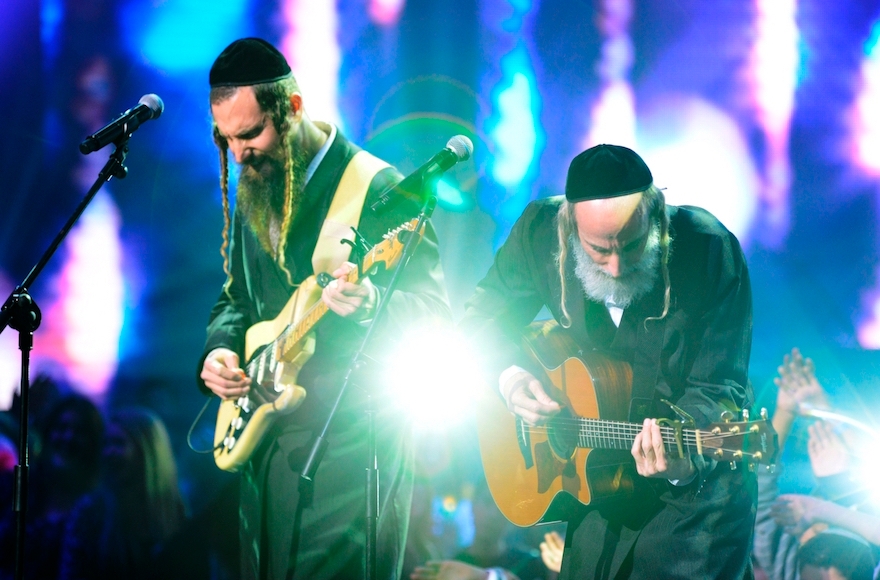 (JTA) — When they boarded a plane for Belgium on Monday, the Haredi pop stars Gil and Aryeh Gat were on a mission to bring extra cheer to one of the world’s happiest Jewish events: Purim in Antwerp.

The brothers from Eilat, who became unlikely celebrities in Jewish circles worldwide following their 2013 appearance in the Israeli version of “American Idol,” were scheduled to perform at a concert that would’ve kicked off Antwerp’s famous Purim street celebrations, which non-Jews call Jewish Carnival.

But as the Gats were tuning up for a sold-out show in Antwerp, home to 12,000 Haredi Jews, terrorists killed at least 31 people in a series of bombings at Brussels’ airport and a subway station. The attacks plunged a grieving country and its Jewish community into lockdown. All gatherings were cancelled as authorities instructed residents to stay indoors.

But that didn’t stop Aryeh, 51, and his younger brother Gil, 41, from completing their mission.

Instead of performing a repertoire of upbeat rock for 1,000 spectators, they set up an intimate concert at a local Jewish family’s living room. There, they performed for a handful of guests a selection of soulful ballads, including Paul Simon’s “Sound of Silence,” Neil Young’s “Heart of Gold” and “Mi Ha’Ish” – a song from Psalms.

The Gats’ manager, Lior Ashkenazi, said he and the brothers had nowhere to go in the paralyzed city, and were grateful for the family’s invitation. He emphasized that the performance was impromptu.

“We are devout believers, and so was our audience in Antwerp,” Aryeh Gat told JTA Wednesday after the duo’s premature return to Israel. “So we worked with what we had, as Judaism teaches us. There was no Purim cheer but there was spiritual uplifting, strengthening and, yes, there was solace.”

Aryeh, a follower of the Breslov Hassidic sect, now lives in Beith Shemesh near Jerusalem. Originally a drummer, he began to play musical instruments at the age of 4 in his family’s native city of Eilat at Israel’s southern tip. He began performing several years ago in jazz and blues clubs with his brother, a career guitarist, but they turned to busking after becoming disillusioned by an industry “in which musicians need to pay club owners to perform,” Aryeh said.

Producers of “The Next Star,” Israel’s version of American Idol, launched them into stardom after seeing videos of the brothers on YouTube, he said. Since then, they have performed in New York, Toronto, across Europe and even in Panama, at the request of Jewish groups and wealthy fans.

The Gats’ visit to Antwerp was their second, following a successful gig there two years ago. They were also scheduled to play Thursday in Brussels, at what is arguably the continent’s hottest Jewish venue: The Great Synagogue of Europe. Yet that event, too, was scrapped.

A Gat Brothers concert is a natural fit for Antwerp, which has many Haredi Jews and in more secure times is known for its street celebrations on Purim. It’s a harder sell in Brussels, a city without a single kosher meat shop, and where the majority of the 18,000 Jewish residents are not observant.

“For many years now, Yiddishkeit has been standing still in Brussels,” said Aryeh, who grew up in a traditionalist family but became Haredi with his brother 20 years ago.

“The organizers worked to get hundreds of people who are not so close to the Jewish tradition to come to this concert at the synagogue. This goal was not reached and it’s disappointing,” said Aryeh Gat. Organizers are working to hold the concert next month.

The Gats were in Antwerp when the attacks occurred; their drummer and base player were about to land in Brussels. Their flight was diverted to Liege in eastern Belgium – leaving them stranded after public transportation was shut down for fear of additional attacks.

The two musicians teamed up with other stranded passengers and drove a rental car to Antwerp via Brussels.

Zooming past 10-mile traffic jams at the exit from the capital — thousands fled its center following the attacks – the musicians joined the Gats in Antwerp just in time for the chamber performance at the home of the local businessman who brought the Gats to Antwerp.

“We believe everything is for the best in God’s plan, and I know that doesn’t sound right when we’re talking about the murder of dozens of innocent people,” Aryeh Gat said. “But I have to believe that this, too, is part of a bigger picture.”