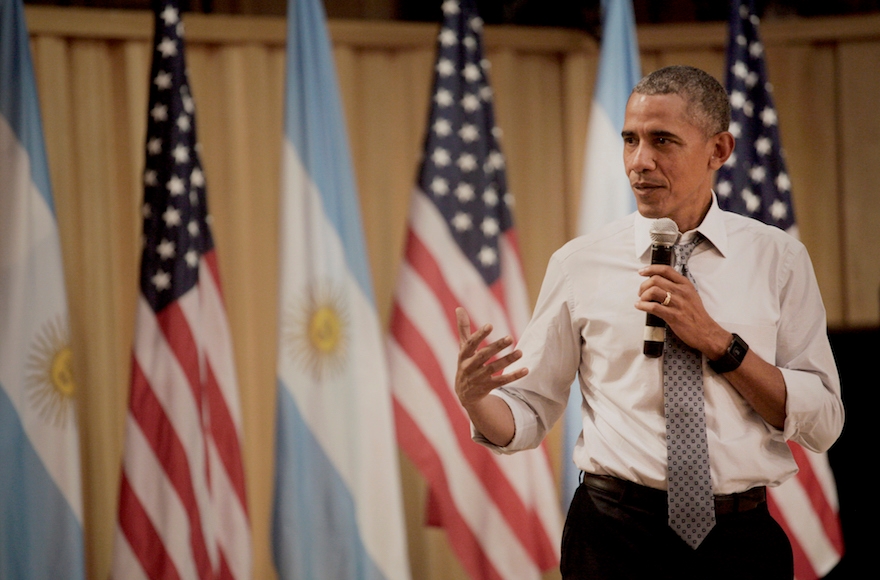 At a news conference Wednesday in Buenos Aires following his meeting with Argentina’s president, Mauricio Macri, Obama said he would visit a memorial to the bombing victims at the city’s Metropolitan Cathedral.

“I told President Macri that the United States offers whatever help we can to finally hold these attackers accountable,” Obama said.

Macri was expected to ask Obama to declassify information held by the U.S. government following a request from the father of one of the bombing victims.

Jewish leaders and American lawmakers had asked Obama to visit the actual site of the AMIA bombing, but the president declined. Leaders of the Argentine Jewish community were invited to a gala dinner with Obama and Macri on Wednesday night.

After visiting the cathedral memorial, Obama had a meeting with local entrepreneurs at which he acknowledged his failure to achieve a peace deal between Israelis and Palestinians during his presidency.

Asked about a binational state, Obama rejected the idea, saying the only solution he sees possible is a “predominantly Jewish” state of Israel alongside a “contiguous” Palestinian state.

“There’s been talk about a one-state solution or sort of a divided government,” Obama said. “It’s hard for me to envision that being stable, there’s such deep distrust between the two peoples right now.”

Obama visited Argentina following his historic visit to Cuba this week, the first by a sitting American president since 1928.