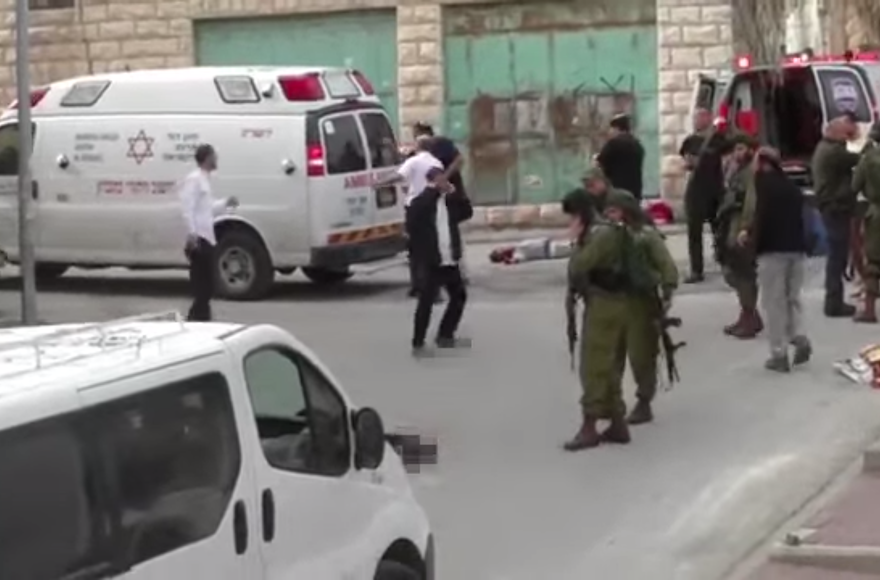 An Israeli soldier apparently shooting a subdued Palestinian attacker in a video taken by a B'Tselem activist in Hebron in the West Bank, March 24, 2016. (Screenshot from YouTube)
Advertisement

The soldier, shown in a video released Thursday by a human rights group, was arrested. The Israel Defense Forces has announced it will conduct an investigation.

According to the Times of Israel, Yaalon said Thursday the case would be handled “with all due severity,” saying the soldier’s apparent actions were “in utter breach of IDF values and of our code of ethics in combat.”

In a statement, Netanyahu said, “What happened in Hebron doesn’t represent the values of the IDF. The IDF expects its soldiers to behave level-headedly and in accordance with the rules of engagement.”

In the video, which was released by B’Tselem, the Palestinian assailant is seen lying on the ground barely moving surrounded by a group of soldiers. An Israeli soldier fires his weapon at the man from a few feet away. In the next frame, blood can be seen dripping from his body and flowing down the street.

IDF spokesman Moti Almoz said the IDF was investigating all the soldiers who were present.

“It’s a very serious and atypical incident,” Almoz said, according to the Times of Israel.

In another army statement reported by the Times of Israel, the IDF called the incident an apparent “serious violation of the IDF code and of what is expected of IDF soldiers and officers.”

The man was alleged to have been one of the perpetrators of an attack in which two assailants stabbed an Israeli soldier in Hebron, causing moderate wounds. Both attackers were shot dead by security forces at the scene, the Israeli army said.