Who are the Jews of Belgium? A primer 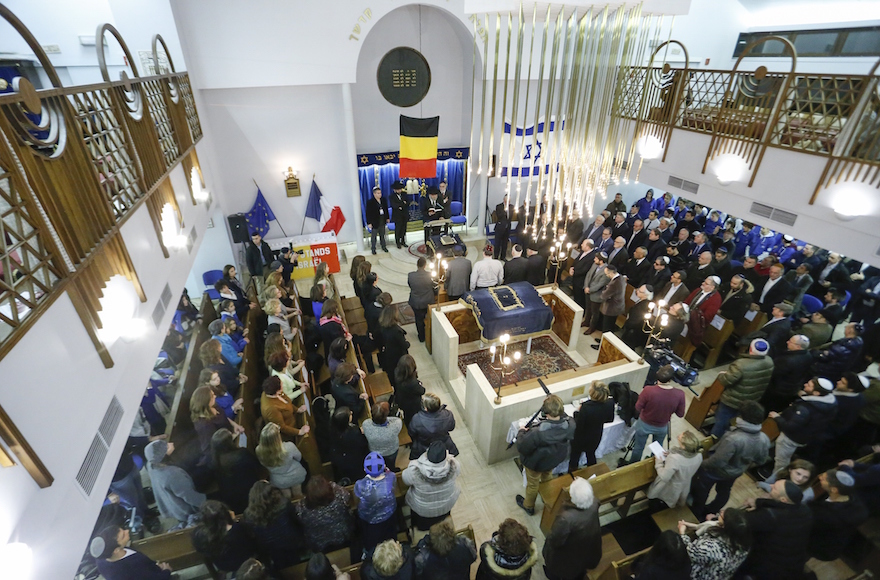 A tribute ceremony in the Maale synagogue in Brussels days after the attacks on the Charlie Hebdo newspaper and the Hyper Cacher kosher market, Jan. 14, 2015. (Thierry Roge/AFP/Getty Images)
Advertisement

Reflecting the history of their complicated binational country, the Jews of Belgium form a community that is both defined and divided by its diversity.

A tale of two cities

Brussels, the capital of the federal Belgian state (population 11 million), and Antwerp, the center of one of the world’s biggest diamond markets, are the two poles of Belgian Jewry.

The two communities progressed on parallel tracks after Belgium’s creation in 1830 on land taken from the Netherlands in the north and France to the south. The country’s two communities are so separated by language and worldview that some Jewish couples from those areas consider their union a mixed one.

Amid financial stagnation, secessionist politics have gained traction in the Flemish region. Flemish Jews sought independent representative organizations. In recent years, they clashed with the more dovish Jewish leadership in Brussels on issues connected to Israel.

In Antwerp, where 12,000 Haredi Jews live, many Jews are proud of the central role their community plays for much larger communities in Europe and beyond. Antwerp kosher slaughterhouses supply meat to communities as far flung as Romania. On Passover, many European Jews eat matzas made in one of Antwerp’s dozens of bakeries.

On Yom Kippur, Antwerp’s Jewish quarter shuts down completely. And on Purim, street celebrations featuring costume parades and music caused non-Jews there to call the holiday “Jewish Carnival.” (Those celebrations were curtailed this year, after twin bombings at Zaventem Airport and at a metro station in central Brussels killed at least 34 people and injured dozens.)

A capital of culture

Brussels has only 20,000 Jews — the same as Antwerp and approximately half of the entire Jewish population of Belgium. Yet it is an international leader in Jewish intellectual ferment thanks to a cultural scene that is among Western Europe’s most vibrant. CCLJ, a Jewish group whose full French-language name contains the word “secular,” regularly hosts eminent thinkers at its community center – a modern, domed space with its own movie theater and gourmet restaurant. Recent events featured the famous French thinkers Alain Finkielkraut and Bernard-Henri Levy.

Brussels also boasts the Great Synagogue of Europe – one of the continent’s largest and most beautiful Jewish houses of worship. This building near the Old City has become more of a tourist attraction than a community’s beating heart following internal emigration by Brussels Jews from the poor central areas to the more affluent suburbs. Since 2013, communities have sold off two synagogues and a Jewish school in downtown Brussels.

No stranger to terrorist attacks, the community reacted with what the European Jewish Congress termed “a model of drilled discipline” to the terrorist attack in May 2014, in which four people were gunned down at the Jewish Museum of Belgium, not far from the great synagogue.

Despite their differences, the two communities share the deep impact that the Holocaust has had on them. Unlike France, where most Jews are Sephardic immigrants from North Africa, in Belgium the majority are Ashkenazim, who either arrived here in the 1930s and 40s from eastern Europe to start anew, or survived the Nazi occupation that claimed some 24,000 Belgian Jews.

Symbolically, perhaps, Belgium’s main Holocaust museum and memorial center, Kazerne Dossin, was opened in 2012 in Mechelen – a city located precisely halfway between Antwerp and Brussels, where Jews from across the country gather annually to commemorate the dead.