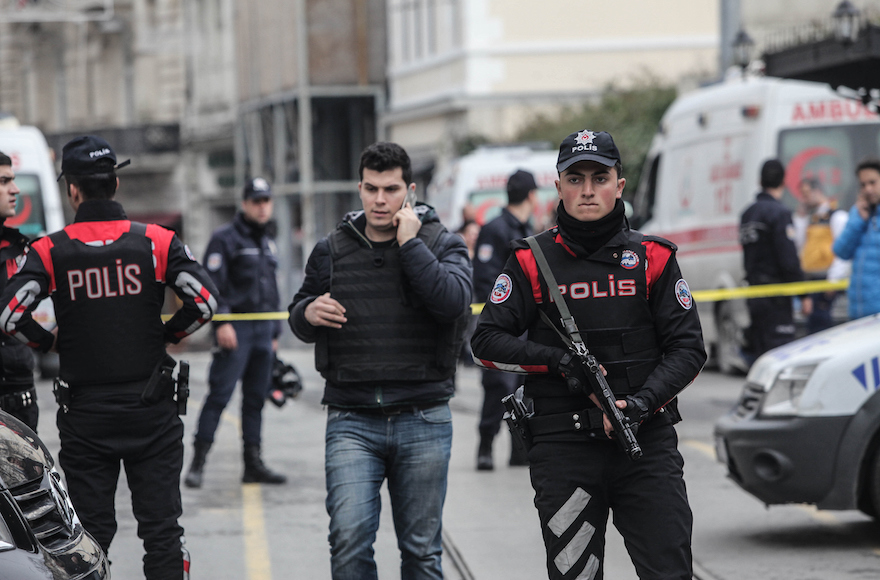 (JTA) — Islamic State terrorists are planning an “imminent” attack on Jewish kindergartens, schools and youth centers in Turkey, according to Sky News.

The most likely target is a synagogue in Istanbul’s Beyoglu district, which is attached to a community center and school, the British news service reported Monday.

The report is likely referring to the Neve Shalom Synagogue, which was hit by attacks in 1986 and 2003.

“We don’t know when it’s scheduled for. It could be in the next 24 hours or next few days,” an intelligence source told Sky News. “In light of these circumstances, extraordinary security measures are being taken above and beyond the high alert level already in place by the Turkish police, as well as vigilance within the Jewish community.”

Just hours earlier, Israel warned its citizens living in or visiting Turkey to leave immediately, warning of an Islamic State threat. On March 19, three Israeli tourists on a culinary tour were among four killed in a suicide bombing in Istanbul. It’s not yet known whether Israelis, who often vacation in Turkey, were targeted.

Sky News reported seeing an intelligence report saying the Islamic State was behind the attack in Istanbul as well as the series of bombings in Brussels on March 22.

Islamic State has been blamed for four of six bombings in Turkey in the past eight months, including a double suicide attack at a peace rally in the capital, Ankara, in October that killed 103 people.

The information about the planned attack came from six Islamic State operatives arrested in the city of Gaziantep, in southern Turkey, in the past week, according to Sky News.

“Undercover and other covert counterterror measures are being implemented around the clock. This is a more than credible threat. This is an active plot,” the source is quoted as saying.

On Saturday, Turkish police warned of possible Islamic State attacks against Christians and Jews over the weekend.