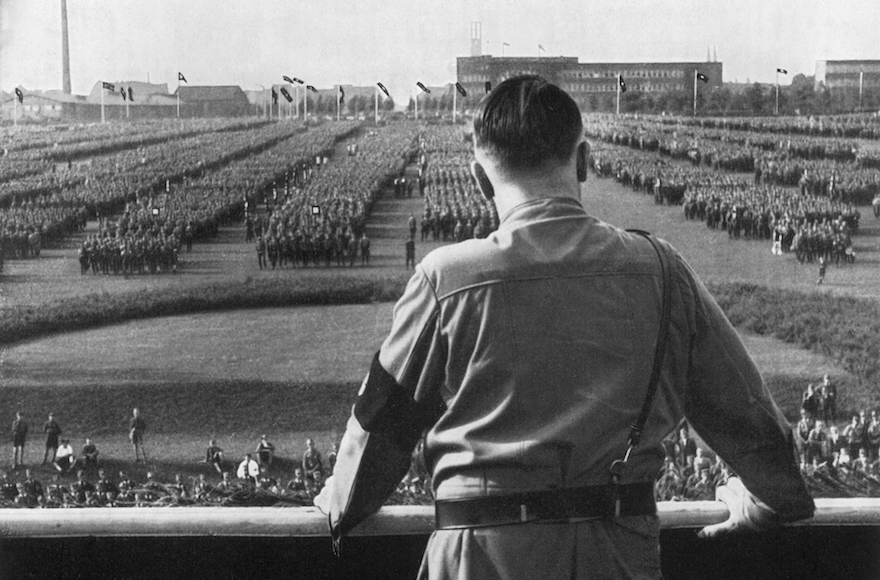 German Fuhrer and Nazi leader Adolf Hitler addressing soldiers with his back facing the camera at a Nazi rally in Dortmund, Germany. (Hulton Archive/Getty Images)
Advertisement

German Chancellor Adolf Hitler addressing soldiers with his back facing the camera at a Nazi rally in Dortmund, Germany. (Hulton Archive/Getty Images)

(JTA) — The Associated Press formally cooperated with the Hitler regime, including providing material produced by the Nazis’ propaganda ministry, a German historian alleges in a new study.

Historian Harriet Scharnberg, in an article published in German in the academic journal Studies in Contemporary History, alleges that AP was able to remain in Germany because of its cooperation with the Nazi regime. AP was the only international news agency allowed to continue to operate in Germany until the United States entered World War II in 1941.

The wire service in response denied collaborating with the Nazis.

“AP rejects the suggestion that it collaborated with the Nazi regime at any time,” its statement said. “Rather, the AP was subjected to pressure from the Nazi regime from the period of Hitler’s coming to power in 1932 until the AP’s expulsion from Germany in 1941. AP staff resisted the pressure while doing its best to gather accurate, vital and objective news for the world in a dark and dangerous time.”

The article was first reported in The Guardian.

AP agreed to abide by the Schriftleitergesetz, or Editor’s Law, under which it would not publish any material “calculated to weaken the strength of the Reich abroad or at home,” Scharnberg wrote.

AP in its response said that the entity Scharnberg is referring to was a German subsidiary of AP Britain established prior to the Nazi rise to power and as such subject to the law when it was introduced in 1935.

The news agency also hired reporters and photographers who worked for the propaganda ministry, and allowed the Nazis to use its photo archives to create anti-Semitic propaganda, Schanberg said.

A historian at Halle’s Martin Luther University, Schanberg argued that AP’s cooperation with the Hitler regime allowed the Nazis to “portray a war of extermination as a conventional war,” according to The Guardian.

In its reply, issued after AP reviewed documents in its archives and elsewhere, the wire service said images “that came from Nazi government, government-controlled or government-censored sources were labeled as such in their captions or photo credits sent to U.S. members and other customers of the AP, who used their own editorial judgment about whether to publish the images.”

The AP in its response noted that Louis Lochner, its Berlin bureau chief at the time, won the Pulitzer Prize for his reporting about the Nazis, and said he protected Jewish employees of the wire service.

Lochner “resisted anti-Semitic pressure to fire AP’s Jewish employees and when that failed he arranged for them to become employed by AP outside of Germany, likely saving their lives,” the AP said. “Lochner himself was interned in Germany for five months after the United States entered the war and was later released in a prisoner exchange. He then spent the next year publicly speaking out against fascism in lectures and in his book, ‘What about Germany.’”