Shmura matzah for Passover: The real reason it’s so expensive 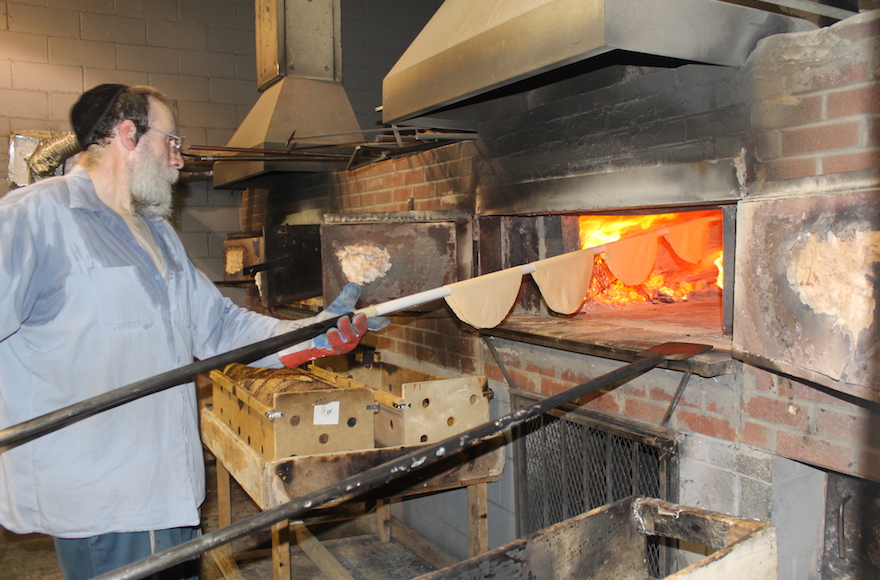 It takes about 20 seconds in a 1,300-degree, coal-and-wood-fired oven to bake shmurah matzah to perfection. (Uriel Heilman)
Advertisement

NEW YORK (JTA) – It costs more per pound than filet mignon. It might be burnt or taste like cardboard. It’s so delicate it often breaks in the box, rendering it unfit for Passover ritual use.

Yet every year, Jews from Brooklyn to Bnei Brak line up to fork over their hard-earned money to buy boxes and boxes of the stuff.

This isn’t your regular box of Streit’s matzah. We’re talking, of course, about handmade shmura matzah: the artisanal, disc-shaped matzahs considered extra special because the ingredients are “guarded” against leavening, or chametz, not just from the time the wheat is ground into flour, but from before the wheat is even harvested. “Shmura” is Hebrew for guarded.

The extra level of scrutiny — and the labor-intensive process required to make handcrafted matzah — is largely what accounts for its high price: anywhere from $20 to $60 for a single pound.

“The amount of hours of labor going into this between me and my staff is incomparable,” said Yisroel Bass, who runs a farm in Goshen, New York, that produces organically grown shmura matzah ($34 per pound for regular shmura, $37 for spelt).

“Renting out a bakery costs a lot of money – the space and the staff. Equipment breaks every year. Every farm has its expenses, and organic farms end up having more overhead. We can’t buy the synthetic fertilizer; we have manure,” Bass told JTA. “And God forbid I have a bad year and the rabbi comes and says the wheat is no good, I just spent a whole lot of time and money on a product nobody wants. The cost has to reflect that.”

Despite its price — and, some say, its taste — there’s a thriving market for handmade shmura matzah (there’s also machine-made shmura, which is cheaper and usually square but more strictly scrutinized than regular matzah). Many observant Jews won’t use anything other than handmade shmura matzah on their seder table. Some won’t eat non-shmura anytime during Passover. The same Jews who light expensive olive oil menorahs on Hanukkah rather than wax candles or buy premium etrogs for Sukkot will lay out extra cash before Passover to buy handmade shmura matzah. (The practice of going above and beyond is known as “hiddur mitzvah,” beautifying the commandment.)

“For the consumer, it is an opportunity to purchase the only sacred food that we have today in our faith,” said Rabbi Shmuel Herzfeld of Ohev Sholom synagogue in Washington, D.C. “It is a bargain. Buy less brisket and more shmura matzah.”

“There is just a sense of authenticity about having shmura matzah on the table,” Weitzman said. “It’s a feeling more than anything else — certainly more than serving up Passover-style Fruit Loops the next morning.” 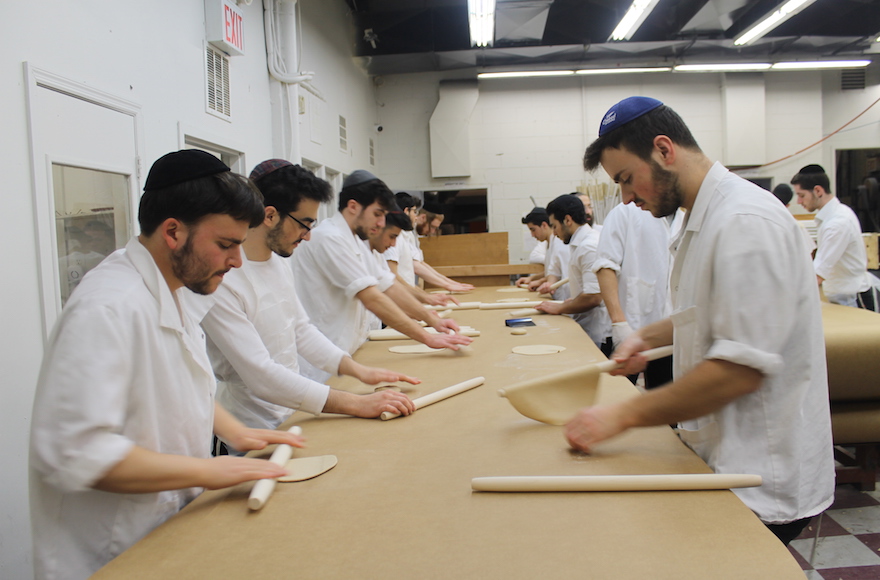 Matzah dough is rolled into thin, round discs before it is perforated and baked. Every 15 minutes at the Satmar Bakery in Brooklyn, the work ceases while all surfaces are scoured or replaced, and all hands are washed to remove stray bits of dough. (Uriel Heilman)

Others say they like the taste and eat it year round, stocking up right after Passover when the price drops dramatically owing to reduced demand.

“I keep a box of shmura matzah in the trunk of my car,” said Tali Aronsky, a public relations doyenne who lives in Israel. “Keeps crispy in all weather and great in a pinch.”

Religious Jews consider shmura matzah baked after midday on the day before Passover — known as “matzot mizvah” — as especially meritorious to eat, and the matzah is priced accordingly. At the Satmar Bakery in the Williamsburg section of Brooklyn, a pound of the Passover eve-baked stuff retails for $60. The line of customers at the Rutledge Street store usually snakes around the block.

The Satmar Bakery employs a number of stringencies rare even in the world of shmura matzah. It harvests its wheat in Arizona, where the dry climate helps guard against accidental leavening (moisture precipitates leavening).

Matzah farmers in the Northeast typically harvest their wheat crop in May or June – around the Shavuot holiday (also called Hag Habikurim, which means Festival of the First Fruits). The wheat is plucked after the kernels start to harden but before they sprout new shoots. Kosher supervisors monitor the grain even as it’s growing to make sure the wheat isn’t sprouting.

From the time it is picked until being milled months later, the wheat must be guarded and stored in a climate-controlled environment. Too moist, it could become chametz. Too dry, it will fail to bake properly. At the Yiddish Farm in upstate New York, Bass says he uses fans and computer monitoring to bring the moisture level down to the desired 11-12 percent level.

After the wheat is milled into flour – also under close supervision – the baking process may begin.

Timing is everything. Once the flour is combined with water to make dough, bakers have just 18 minutes to turn it into matzah. Pass that threshold and the matzah, like Cinderella at midnight, turns to chametz. At the Satmar Bakery in Williamsburg, the clock is set for a 15-minute countdown, just to be safe.

Bakers use water – drawn from a well, according to tradition, after sunset but before nightfall – and mix it with the flour to make dough. The dough is portioned, rolled into flat circles, perforated with tiny holes, draped on poles and thrust into a 1,300-degree, coal-and-wood-fired oven for about 20 seconds. After the matzah cools, it is inspected for quality (burnt and broken pieces are discarded or sold at a discount) and boxed, seven to a pound.

Between every 15-minute baking cycle, every surface that comes into contact with the dough must be scoured or replaced. If a stray bit of dough from the previous cycle remains, the older-than-18-minute crumb would be chametz and taint the dough used in the following cycle. That means hands must be washed and inspected, wooden rollers are discarded and replaced, and work surfaces are covered with fresh paper. All the workers who handle the dough or matzah are supposed to be religiously observant. 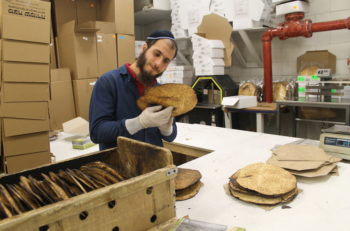 Every shmura matzah is inspected for quality and adherence to kosher standards before it’s boxed. (Uriel Heilman)

The Satmar Bakery operates about six months per year, from Sukkot until Passover, producing roughly 100,000 pounds of matzah.

“We make a little more than 1,000 pounds a day,” said manager Burech Yida Spitzer. “We vacuum-pack all the matzahs. It stays the same fresh from October till Pesach.”

Not all handmade shmura matzah is considered equal. There’s regular, whole wheat and spelt. There’s shmura baked by pious young women, called Beis Rachel matzah — prized because the bakers are considered more reliably religious than ordinary matzah workers for hire. There’s matzah baked according to varying scholarly interpretations. And, of course, there’s broken matzahs, which may be consumed during the holiday but are unfit for ritual use – for example, as one of the three official seder matzahs or as one of the pair of matzahs used at the beginning of all festival and Shabbat meals – because they’re not whole. Each variation is priced differently.

“We have 15 different kinds of matzah,” said Eli Hershkowitz, who runs the Satmar Bakery. “It’s all very crispy and breakable. Most people buy it right at the bakery, but we also have a delivery service and take orders by phone and fax. I ship only at your own risk. If it’s going to California or Florida, it’s not going to make it intact.”

Hershkowitz spends part of the spring scouting wheat in Arizona and part of the summer dealing with etrogs in Italy and Morocco.

At these kinds of prices, a growing number of operators appear to be getting into the shmura matzah business. Discount supermarket chains in Israel now sell relatively cheap shmura matzah, and some American consumers say they’ve found handmade shmura matzah at their local Costco for as little as $13 a pound.

“Money is nothing, spirituality is everything,” Braver wrote on Facebook in response to a query from a JTA reporter. “What do you want — we should ship matzahs also from China like Apple’s iPhones? No. We have to support our rabbis who work very hard producing those matzahs with fervent yiras Shamayim” – fear of God. “They are holy and serve God with utmost sacrifice.”