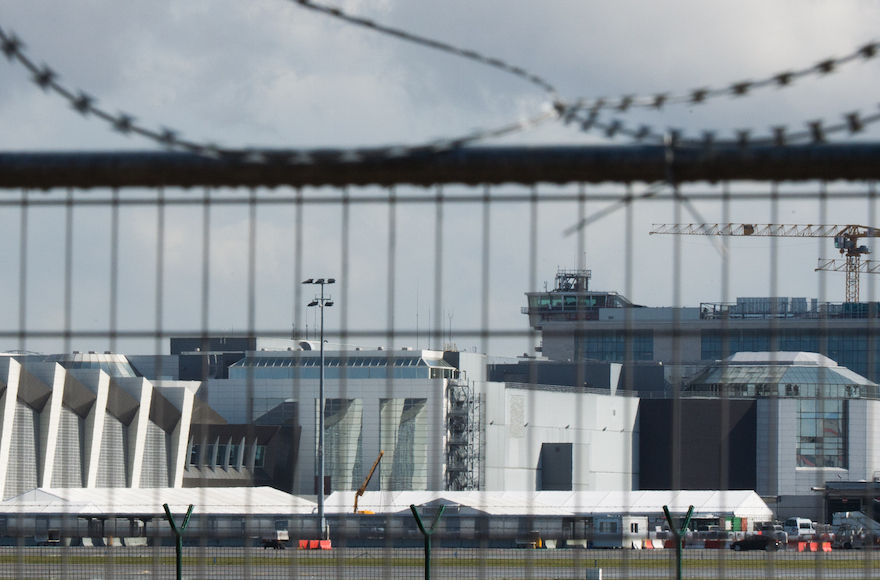 Tens at Brussels Airport where authorities were running tests to see if makeshift check-in facilities are good enough to restart some flights and that repair work and new security measures are adequate after the deadly March 22 attacks, in Brussels, March 29, 2016.
Advertisement

(JTA) — An operator in Belgium’s federal hotline on the terrorist attacks in Brussels was fired for telling a Jewish caller that Israel does not exist and is in fact called Palestine.

The call Thursday to the Belgian Interior Ministry’s hotline was recorded and the audio file posted on the website of Joods Actueel, a Belgian Jewish monthly.

Following the publication, the European call center group IPG fired the employee, whom they put to work at the call center in the framework of their contract with the ministry, Joods Actueel reported.

“We wish to apologize to all members of the Jewish community and to the victims and their families in Israel,” said Jac Vermeer, CEO of IPG.

In the recording, a man who presented himself as a volunteer for Antwerp’s Jewish Coordination Committee told the operator in Flemish that he was calling on behalf of two people who were injured in the March 22 attacks in Brussels and wish to be discharged as they are “being prepared to be transported to Israel.” The caller asked about the procedure for discharging them.

At least 32 people died in a series of suicide bombings last week at Zaventem Airport near Brussels and at a central metro station, which the Islamic State terrorist group said it planned and executed. The federal government opened a call center immediately after the attack to handle requests by callers seeking information on questions pertaining to personal safety, recommended behavior in emergencies and by people seeking information on the victims.

In the conversation with the Jewish volunteer, the operator can be heard: “That’s actually… See … Back to Palestine.” The Jewish caller insisted: “Not Palestine, Israel,” prompting another correction by the operator, who retorted: “Yes, but that was before Palestine, of course.” He also said about Israel: “It’s called Palestine, sir.”

Asked for his first name, the operator said it was Zakharia but refused to state his last name.

Challenged over his remarks over Israel, the operator told the caller: “I know the Jews went to there, that Palestine received them and that there is a war between Israel and Palestine, of course. And the occupation … that’s what’s on the news of course.” Asked whether he would be able to help with the patients’ discharge regardless, the operator replied: “Yes, of course.”

Michael Freilich, the editor in chief of Joods Actueel, said it “defies imagination” that a Belgian state employee would display the anti-Israel behavior that is commonplace in Arab countries. He also called for punishing the operator instead of issuing the “standard apology.”

A spokesperson for the crisis center told Joods Actueel it deeply deplores the “isolated case” and will take “necessary actions” against the staffer in question, which the center said was not a civil servant but a call center employee.

The recording’s release follows at least four recorded cases in which people who either spoke Arabic or wore Muslim traditional garb destroyed, concealed or removed Israeli flags at an impromptu memorial space set up for the attacks’ victims at Place de la Bourse in Brussels. It features many flags, including those of Arab countries and the Palestinian Authority.