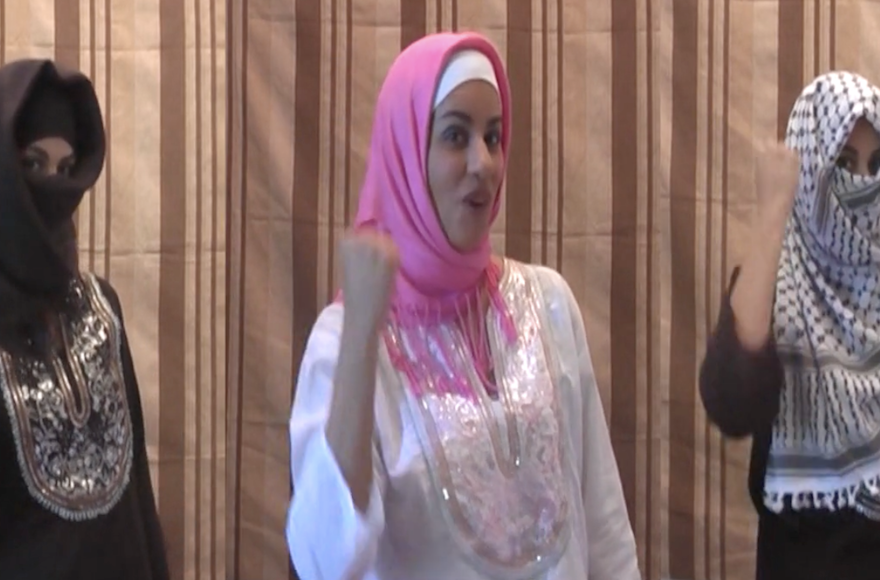 Orit Arfa and the "Gaza Girls" performing in the "Kill All the Jews" online music video. (Screenshot from YouTube)
Advertisement

(JTA) — A Spanish judge recommended an indictment on incitement to violence of a person who shared on Facebook an Israeli-made music video spoofing Palestinian propaganda.

The No. 1 Court of First Instance and Instruction of Tudela, a municipality located about 200 miles northeast of Madrid, made the recommendation on Tuesday, the Noticias de Navarra daily reported.

An unnamed municipality resident shared a 2014 video titled “Kill All the Jews” by the “Gaza Girls” – a fictional Palestinian girl group invented and headed by Orit Arfa, an Israeli artist and right-wing settler activist.

The local prosecutor’s office must decided whether to indict as recommended within two weeks.

Arfa’s Internet videos, many of which she stars in, include the controversial “Gaza Wrecking Ball” and “Jews Can’t Stop” — both interpretations of Miley Cyrus hits. Arfa was among 9,000 Israelis who lived in Jewish settlements in the Gaza Strip before their evacuation in 2005.

Featuring lyrics likes like “exterminate the Zionists, the world will be better for it” and “kill the Jews, it’s our turn,” the English-language video was produced to “help Hamas out and offer a more feminist, bubble-gum version of their genocidal propaganda,” Arfa wrote in 2014.

Omitting any reference to the video’s satirical nature, the Spanish court described it as “a musical video by the self-styled feminine trio ‘Gaza Girls,’ with English lyrics that incite to hatred and violence against people of the Jewish faith and against the State of Israel, sending clear messages through the lyrics as well as imagery encouraging to kill people belonging to these groups.”

The video was initially hailed by anti-Israel groups but eventually flagged as a parody, Arfa wrote in recounting the reaction. While her spoof was removed as hateful from various social networks, she wrote, the Arabic propaganda videos she was commenting on were not.