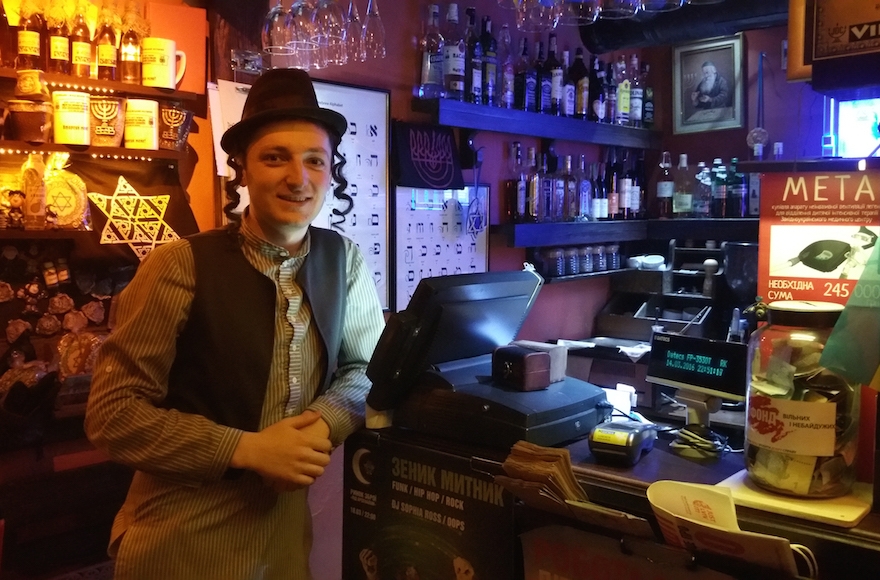 LVIV, Ukraine (JTA) — There’s a Jewish-themed restaurant attached to the ruins of the 16th-century Golden Rose Synagogue here. It first caught my eye last month when I was taking photographs of Meylakh Sheykhet, a haredi Jewish man who is fighting to preserve what’s left of the once beautiful structure.

Sheykhet insisted I train my lens in a different direction.

“I don’t want this anti-Semitic restaurant in the background,” he said.

At first glance Pid Zolotoju Rozoju, Ukrainian for “At the Golden Rose,” isn’t a particularly remarkable restaurant.  But if “Jewish themed” makes you think of a kosher-style deli in Miami Beach or a Montreal bagelry, think again: Peddling Jewish food and culture with a combination of nostalgia and stereotypes, the eatery has been widely pilloried.

Since it opened in 2008, the restaurant has faced allegations that it crassly perpetuates anti-Semitic stereotypes, particularly in a place where Nazis and locals wiped out nearly all traces of Judaism – including the very synagogue after which it is named.

I wanted to check out those allegations for myself. So I posed Sheykhet against a different background and decided I’d return later that evening for dinner.

Pid Zolotoju Rozoju looks like many other restaurants in this city near the Polish border, which has changed names and hands over the centuries as it fell under Russian, Polish and Austro-Hungarian control.

The joint is dark and small, with low ceilings, no windows and only nine tables. Its decor, such as it is, consisting of Judaica and Yiddish theater posters, could practically be considered tasteful, even if the restaurant serves non-kosher dishes such as rabbit kidneys.

READ: In Lviv, a Holocaust survival story gets lifted from the gutter

But after sitting down and seeing the menu, I understood the uproar. There are no prices. That’s because “it’s Jewish tradition to haggle and bargain afterwards,” said my non-Jewish waiter, who instructed me to call him Moishe — though, when pressed, he revealed his name was Vlodymir. He then told me he’ll be right back and went into the kitchen.

I was left alone to survey my surroundings in the quiet dining room.

The cheap-looking wooden tables had stained crocheted tablecloths. Juxtaposed with the greasy, retro interior was a plasma television showing a slideshow of images from 1930s Lviv, when the city had 110,000 Jews — a third of its total population.

Back then, Lviv (in Russian it’s Lvov, in German Lemberg) was teeming with Jewish life and the Golden Rose was considered one of the finest synagogues in Europe. Lviv had five Jewish publishers, six Jewish schools and many small haredi schools. Among the Jewish newspapers sold here were the Togblat (Yiddish) and Chwila (Polish) dailies.

But it all came to an abrupt end in 1941, when the Germans invaded. They blew up the synagogue in 1943. Only a few hundred Jews survived. Today the Jewish community numbers 1,200.

READ: Lviv mayor:  There’s never been anti-Semitism and there will never be

While I was contemplating my people’s sad history in the city, Moishe came back with a bowl and a copper jug. He had covered his brown hair with a black hat adorned with fake peyot, the sidelocks typically grown by haredim. He cheerfully shook his head to make the fake hair jiggle.

“It’s Jewish tradition to wash your hands before eating. We are a very clean people, as you see,” he said, gesturing, ironically or otherwise, at the somewhat grubby surroundings.

Playing the part of an unknowing tourist — a persona I decided would make the staff feel most at ease — I obliged with a smile. I then asked whether he had any pork schnitzel.

“But if you pay extra, maybe we can arrange something,” he added with a mischievous smile.

Such antics are the trademark of the Lviv-based !FEST chain of concept restaurants that operates Pid Zolotoju Rozoju. Its properties include Kryjivka, which was built like a partisans’ bunker and accused of honoring the legacy of a Nazi collaborator. Another celebrates the life and writings of Leopold von Sacher-Masoch, whose kinky works inspired the term “masochism.”

Across Eastern Europe there are restaurants paying uncomfortable homage to communities decimated by the Holocaust. Several of these “Jewish,” pork-serving restaurants operate in Kazimierz, the Jewish quarter of the Polish city of Krakow. In Kiev, Cimes (its name a variant of tzimmes, the Ashkenazi carrot dish) boasts a neon sign featuring a caricature of a hook-nosed Jew. 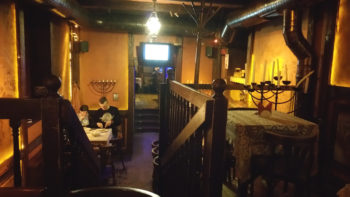 Patrons reading the price-free menu at Pid Zolotoju Rozoju, the “Jewish” restaurant adjacent to the remnants of the Golden Rose Synagogue. (Cnaan Liphshiz)

But the Golden Rose restaurant has been the most controversial. Sheykhet, the Ukraine director of the Union of Councils for Jews in the Former Soviet Union, told me it “panders to, and thereby enhances and legitimizes, anti-Semitic attitudes.”

Andriy Khudo, a co-owner of Pid Zolotoju Rozoju, has frequently faced such accusations. In 2012, he told Agence France Presse that he and his partners “studied the history of Jews in Lviv for three months and worked with the main Jewish organization in the city, which gave its approval for the project.”

Khudo was referring to an endorsement reportedly given by Ada Dianova, who runs the local Jewish Hesed charity. In an 2008 interview, Dianova said Hesed gives “gifts and printed material” to Pid Zolotoju Rozoju to distribute to patrons. (I only received a magnet with the restaurant’s name as a souvenir.)

“We do maybe use stereotypes, but the customers like it,” Khudo told AFP. “And Ukrainians, too, like haggling. There’s nothing offensive in it.”

During my visit, a group of young Ukrainians drank plum liquor at the bar. They burst into laughter when the barman told them the drink was made by squeezing juice out of Jews’ peyot.

I asked one of them whether she had heard that some Jews find the place objectionable.

“I never met any of them, so I don’t know,” said the patron, who identified herself only as Marina.

Despite the owners’ insistence that it’s all good-natured fun, the restaurant’s menu refers to Jews as “zhids” — the Russian equivalent of  “kikes.”

The price-free menu carries a long-winded disclaimer explaining that zhid is a neutral word in Ukrainian. The reality, however, is more complicated. Many Ukrainians use it matter-of-factly, but many others use it as a slur. Ukraine’s official Jewish community staunchly opposes its use, arguing it should be dropped altogether.

When the check finally came, Moishe’s opening bid was 450 hryvna — approximately $17. That’s more than triple an acceptable price in Lviv for what I had ordered — a stewed beef brisket with polenta that to my unsophisticated palate tasted pretty good.

Aware of the irony of the situation — I was accepting Moishe’s challenge to act according to a racist stereotype of, well, me — I offered to pay 30 percent lower than what I estimated to be fair, hoping to settle on it.

But Moishe had another trick under his black hat: If I could sing a song in Yiddish for him, he said, I would get a discount.

Deliberating over my small repertoire of Yiddish songs, I reflected on the nearby Jewish ghetto that in 1943 was converted into a labor camp where more than 15,000 of my brethren were murdered.

So I sang “Partizaner Lid,” the heartbreakingly optimistic partisans’ anthem written that year by Hirsh Glick, a young Jewish inmate of the Vilna Ghetto. Like many Israelis, I had studied its Hebrew-language version, but I know a part of the Yiddish original thanks to my Lviv-born bar mitzvah tutor.

“Never say this is the final road for you, though leaden skies may cover over days of blue,” I sang in Yiddish.

But I had to switch to Hebrew because I could no longer remember the lyrics in the language that the Nazis had done their best to erase. My voice cracked with emotion.

“Very nice,” he said, and knocked 50 hryvna off the bill.