Debra Messing, matzah baking, bashert making — what to expect ahead of the New York primary 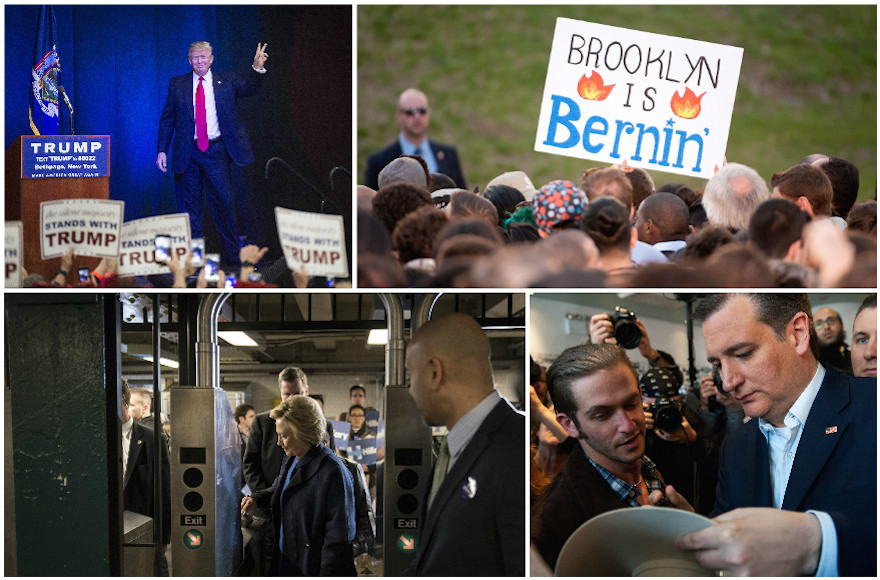 WASHINGTON (JTA) – For the first time in decades New York, politically, is about to live up to its “make it here, make it anywhere” promise.

The vast state and its huge Jewish community –nearly 2 million, or just under 10 percent of the population — have not figured as crucially in an election since 1976, when President Gerald Ford spent most of the year beating back a challenge from Ronald Reagan among the Republicans and Americans were just getting to know a former peanut farmer named Jimmy Carter.

In 2016, the stakes may be even higher. Forty years ago, victories in New York by Ford and Sen. Henry “Scoop” Jackson, D-Wash., were not determinative. This time around, the results on April 19 could conceivably change the race.

Saturday features a Democratic caucus in Wyoming, but all eyes are on New York.

Sanders and Cruz hope to consolidate their wins this week in Wisconsin into the inevitability of contested conventions, where they believe the insurgents have a chance of prevailing in second, third or subsequent rounds of delegate voting.

Trump and Clinton, the front-runners, hope home-state advantages will secure leads secure enough to land them at their conventions with guaranteed majorities. Kasich wants to stay alive in a state he believes is amenable to his moderate outlook.

Do the candidates court the Jews? Do Baptists bake matzah? Cruz did on Thursday. It’s kind of inevitable: New York City’s metro area holds 13 percent of all U.S. Jews, the largest such concentration, according to a 2013 study by the Pew Research Center. And Jews are likelier to vote, said Sarah Bard, Clinton’s Jewish outreach director.

“The Jewish vote is about 16-19 percent of the primary vote, even though we’re about 10 percent of the population,” she said. “The community is very engaged on the issues.”

Here’s what to look for.

It’s a closed primary, so the race to watch is Sanders-Clinton.

Most Jews — even conservatives — are likely registered Democrats, said Steven M. Cohen, a professor of Jewish social policy at Hebrew Union College-Jewish Institute of Religion in New York, because if you want to influence outcomes at the local, state and federal level, you need to be registered as a Democrat in most of the New York districts where Jews live.

And “because the state is considered safe for the Democratic candidate no matter what happens,” he said, the Jewish vote will be more significant in the Democratic primary than the Republican one, and certainly in the general election.

That goes for Orthodox Jews, even though they are trending increasingly Republican, said Nathan Diament, the Washington director of the Orthodox Union. Diament posted a chart on Twitter showing presidential election votes since 2000 spiking for Republicans in a number of heavily Orthodox precincts, including Brooklyn.

But Diament cautioned in an email: “I would note that in places like New York and Maryland, i.e., states where the ‘whole game’ is about the Democratic primary, most Orthodox Jews are still registered Democrats.”

Switching parties is also less likely in New York, which has the earliest party-switching deadline: Oct. 9 of last year. First-time voters had until the end of last month to register with a party.

Hillary Clinton loves Israel. And did you see that Bernie Sanders interview?

Look to Clinton to repeat the themes she sounded last month in her speech to the American Israel Public Affairs Committee policy conference, recalling her closeness to the state’s Jewish community and the pro-Israel lobby when she was a U.S. senator representing New York from 2001 to 2009. (Just saying the words “senator from New York” got her applause at the conference.)

She will continue to draw contrasts with Trump, who said he would remain neutral on the Israeli-Palestinian front — until he said he wouldn’t.

“We need steady hands, not a president who says he’s neutral on Monday, pro-Israel on Tuesday and who-knows-what on Wednesday because everything’s negotiable,” she said at AIPAC.

Clinton, smarting from her Wisconsin loss, has taken shots this week at Sanders, questioning his judgment on an array of issues, including foreign policy.

On MSNBC, Clinton cited an extensive Sanders interview with the New York Daily News editorial board in which he faltered on some points, unable to pin down policy details.

“The interview raised a lot of really serious questions,” she said.

Insiders said Clinton would focus ahead of the New York primary on the lengthy Israel portion of the interview, in which Sanders said Israel needed to improve its relations with the Palestinians if it wanted to maintain “positive” relations with the United States. He also stumbled over the number of Palestinian civilians killed in the 2014 Gaza war, wondering if it was 10,000. (Israelis say the number is closer to 1,200 out of 2,125 killed.)

The Daily News, owned by Clinton backer Mort Zuckerman, made hay of Sanders’ Israel comments in an editorial titled “The scary Bernie Sanders.”

Campaigners said they would mine Clinton’s deep ties in the state’s Jewish political establishment. Ruby Shamir, who worked for Clinton at the White House and then when she was senator, had been working the phones calling Jewish community leaders.

“Leaders, rabbis are recalling specific interactions with her,” Shamir said. “Her visits to shiva, asking about sick parents.”

Rep. Steve Israel, D-N.Y., would be a principle surrogate, said Bard, the Jewish outreach director. Mark Levine, chairman of the Jewish caucus on the New York City Council, was pledged to get out the vote.

An emphasis would be on Jewish women, where Bard suggested Clinton’s candidacy was especially resonant. Rep. Nita Lowey, D-N.Y., led an “action call” for Jewish women, and the campaign would deploy actress Debra Messing, one of Clinton’s most prominent celebrity surrogates, in the community.

Sanders, after winning in Wisconsin, reminded voters that he, too, had a personal stake in New York.

“I know a little bit about New York because I spent the first 18 years of my life in Brooklyn, New York,” he said, in case anyone hadn’t discerned the borough’s drawn-out vowels in his accent until now.

Cohen of HUC said that Sanders’ likeliest target among the state’s Jews are its secular, younger and unaffiliated Jews – Sanders has slaughtered Clinton among millennials. That constituency is “likely to resonate with the secular Jewish identity that Bernie Sanders broadcasts,” he said.

When Sanders mentions his Jewishness, he says the horrors of the 1930s and ’40s and the loss of much of his father’s family to the Holocaust have shaped his championing of the oppressed.

In the Daily News interview, Sanders was expansive about Israel, noting that he spent time in the country as a kibbutz volunteer in the 1960s.

Jews for Bernie, a group not affiliated with the campaign, is arranging a “seudah shlishit, the third meal of the Sabbath, on Saturday evening to organize volunteers to canvass for the candidate in Brooklyn.

All food for the event, dubbed “ShaBERNIE,” must be “vegetarian/dairy/vegan,” the organizers said on their Facebook page. Another poster links to a manufacturer of Bernie Sanders condoms, “in case you meet your bashert” (soul mate) at the event.

Jews trend Democratic, but it makes sense for Ted Cruz to make matzah.

Trump is expected to take the state, with a Monmouth University poll on Wednesday showed him garnering half the Republican votes. But it is not winner take all; Republican rules in the state allot three delegates to each district. If one candidate does not hit 50 percent in the district, two delegates go to the candidate with the most votes and one goes to the second-place finisher.

Cruz will be working the 27 districts to peel away delegates, with a special emphasis on Orthodox Jews, said Nick Muzin, a senior adviser to the campaign.

“We think we can pick up a lot of delegates in New York, especially with the Jewish vote in some of those downstate areas,” he said. “His message is going to be religious freedom, school choice, and the foreign policy message on Iran and Middle East issues.”

Hence Cruz’s matzah-making session Thursday at the Chabad Neshama Center in Brighton Beach, a Brooklyn section with a large population of Russian Jews. He telegraphed his message for the state’s Jewish voters in his victory speech in Wisconsin.

“Catholic schools and Jewish schools, Brigham Young [University] and the Little Sisters of the Poor, will see a Supreme Court that protects their religious liberty,” he said, referring to challenges to Obama administration policies on contraception coverage and on hiring discrimination that have rankled religious groups. “We’ll see a president who stands with Israel, clearly and unapologetically. Instead of negotiating with terrorists, we’ll rip to shreds this catastrophic Iranian nuclear deal.”

John Kasich has a lot of Jewish friends

Kasich in a speech in December to the Republican Jewish Coalition notably riffed on his Jewish friendships. Brad Kastan, one of the Ohio governor’s leading home state backers, said Kasich plans to emphasize those relationships, cultivated since he started life in state politics in the 1970s and then through his years in Congress in the 1980s and ’90s.

“In the Jewish community areas, he will play really well,” Kastan said of the sole remaining establishment GOP candidate in the race. “When the community gets to hear about his lifelong friendships with the Jewish community, what he did with the Holocaust memorial, his support of religious schools, his moderate social views, his visits to Israel – he plays well.”

Kasich in 2014 dedicated a Holocaust memorial on the statehouse grounds in Columbus.

Trump will be Trump

The Trump and Sanders campaigns did not return requests for information about Jewish outreach.

Since speaking to AIPAC last month, Trump has  maintained his pro-Israel line, pledging to renegotiate the Iran nuclear deal. He also likes to mention that his daughter, Ivanka, has converted to Orthodox Judaism, and mentions his many Jewish friends and colleagues in New York’s real estate business.

But don’t expect retail politics of the matzah factory/JCC debate variety. Trump has throughout his campaign emphasized big arena events. He switched to small-bore meet-and-greets in Wisconsin, but it didn’t help. He appeared relieved to be back in New York, doing the crowds thing.

“Just made a speech in front 17,000 amazing New Yorkers in Bethpage, Long Island,” he said Wednesday evening on Twitter. “Great to be home!”