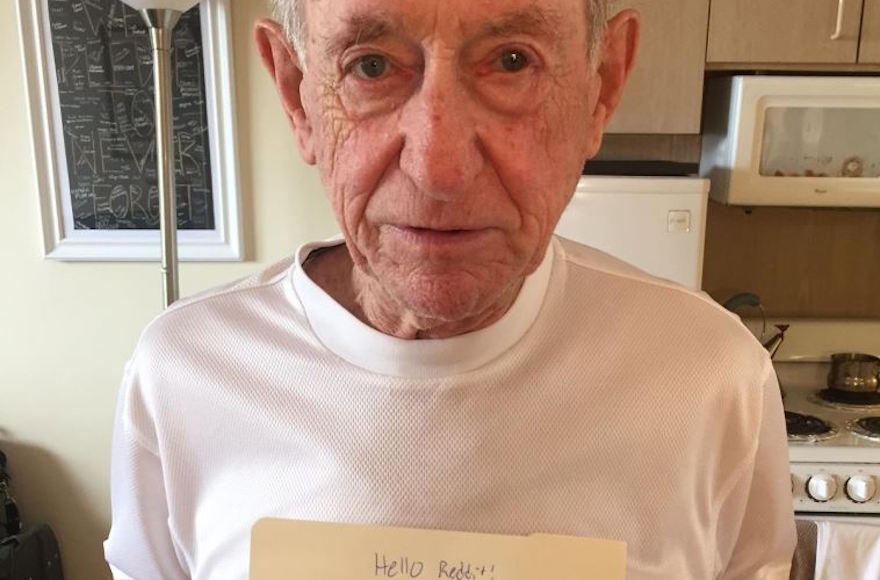 (JTA) — A 92-year-old survivor of seven German concentration camps participated in a Reddit Ask Me Anything question-and-answer session, detailing his harrowing near-death to liberation story.

Henry Flescher of Aventura, Florida, participated in the forum with the help of his grandson, the Australian Broadcasting Corp. reported Wednesday. He had not heard of the social news-sharing site Reddit before the session earlier this week.

“Most people are never happy and complain too much,” Flescher said. “It’s too hot out, it’s too cold out. Life is beautiful, no need to complain so much.”

Flescher, a native of Vienna, escaped to France during World War II but was captured in Lyon. He spent the next three years in the Nazi camps, including Auschwitz.

He described being transported to a camp by a cattle car packed with prisoners and one bucket to use as a toilet.

“The smell was unfathomable,” Flescher said.

After enduring six days in the car, 300 prisoners were taken off the train and the others were shipped off to be killed at Auschwitz. Flescher said he was number 298.

Flescher went on to work in a shoe factory at the Ohrdruf camp and helped build bridges at the Peiskretscham camp. He also worked at the Blechhamer camp, a place he called “hell” and where he witnessed a friend be hanged for using a telephone wire as a belt to hold his pants up.

“Punishments were a daily routine and my front teeth were knocked out here,” he said.

Flescher nearly gave up hope when he contracted a bad case of dysentery at the Gross Rosen camp.

“I lived for tomorrow. I was always positive,” he said.

He was eventually found hiding in a chicken coop by American soldiers in 1945.

“I have always believed in God. Before and after. God didn’t kill the people, the Nazis did,” he said.

Numerous celebrities and thought leaders, from Jerry Seinfeld to President Barack Obama, have participated in Reddit AMA sessions, which solicit questions from users in the website’s social network community.