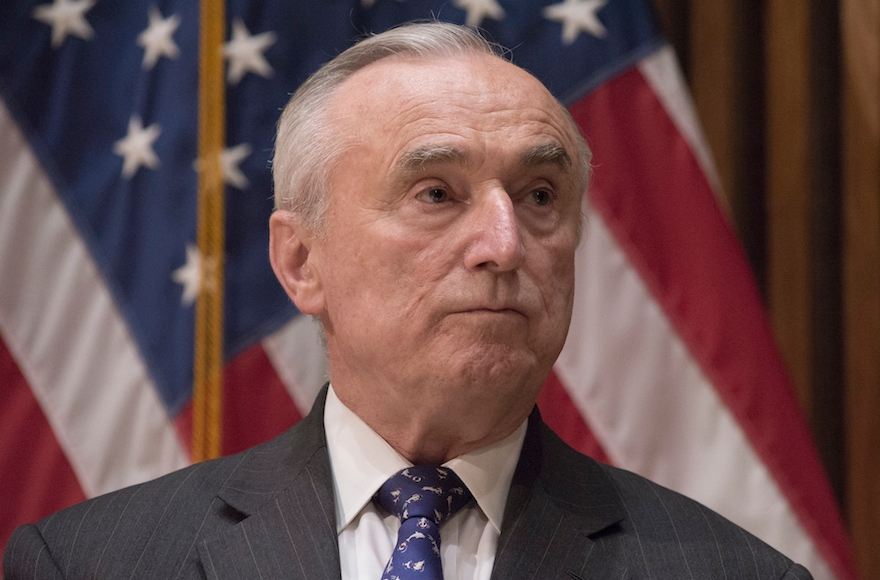 William Bratton listening as Mayor Bill de Blasio speaks to the press at a briefing at One Police Plaza in New York, March 28, 2016. (Albin Lohr-Jones/Pacific Press/LightRocket via Getty Images)
Advertisement

NEW YORK (JTA) — The New York Police Department has put two high-ranking officers on modified assignment and transferred two others after an FBI investigation turned up evidence indicating they had accepted cash and expensive gifts from two businessman, including one politically active in Borough Park’s Orthodox community.

“This is not a particularly good day for the department,” Police Commissioner William Bratton said Thursday, according to WABC-TV in New York.

“The potential violations under investigation include violations of NYPD rules and policies, the city conflicts of interest rules and the federal criminal laws. The investigation is examining the conduct of current and former NYPD officers and several others.”

No one has been charged criminally, but under New York state law it is a crime for a police officer to accept anything of value, whether as a tip or in exchange for favors.

The officers disciplined Thursday, among them the chief of the 19th Precinct on Manhattan’s Upper East Side, are believed to have received gifts and foreign trips, including to Israel and the Caribbean, from the businessmen in return for favors, the Post reported. Other gifts, anonymous sources told the Post, included diamonds and cash.

The businessmen named are Jeremy Reichberg and Jona Rechnitz, both of Brooklyn, who both served on New York Mayor Bill de Blasio’s inaugural committee in 2013 and contributed to his campaign, The Associated Press reported. They have not contributed to his reelection campaign. The post described Reichberg as “a prominent figure in Borough Park.”