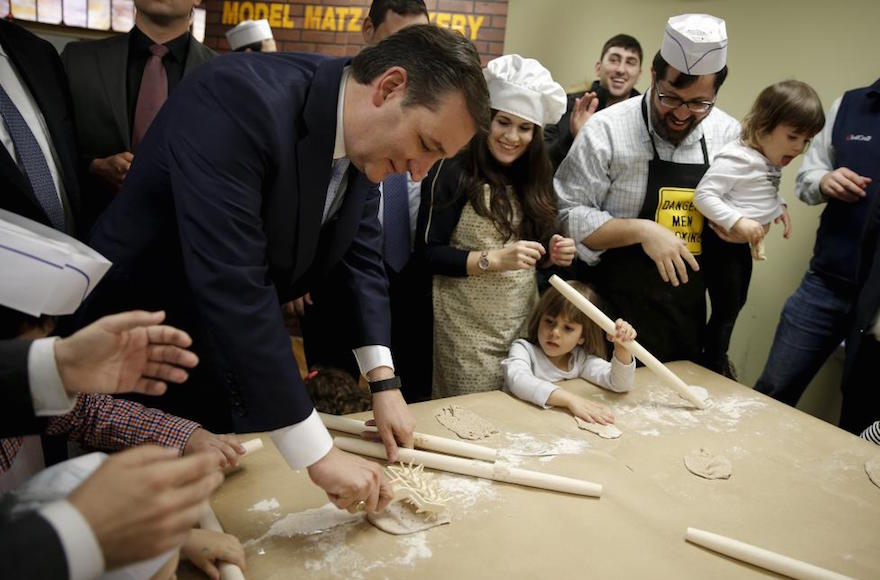 Cruz was joined by Rabbi Moishe Winner and his wife, Leah Winner. He even sang and clapped with the children through a rendition of the Passover song “Dayenu,” according to ABC News. Dozens of supporters chanted “Jews for Cruz” as the senator entered the bakery, and on his way out.

Cruz then met with Hasidic community leaders at the Jewish Center of Brighton Beach, where he talked “about our shared concerns, he talked about Israel, and the fact that we should stand together, and about foreign policy,” former New York State Sen. David Storobin, who helped organize the meeting, told DNAinfo.

Rabbi Winner told the local news website his organization does not endorse political candidates and that the Cruz campaign reached out to the center “because of our connection to the community.”

Cruz had been scheduled to speak at a Bronx high school Thursday, but the principal canceled the event after students threatened to walk out in protest of his stance on immigration, according to the New York Daily News.

READ: What to expect ahead of the New York primary

Polls show Donald Trump, the GOP front-runner, with a dominant lead over his rivals in New York. The state Republican and Democratic New York primaries will be held April 19, and are unusually important to both parties. New York is the most-Jewish state in the United States, thanks to New York City, the most Jewish city.

Though most Jews are Democrats, the Orthodox are trending increasingly Republican, according to Nathan Diament, the Washington director of the Orthodox Union. Diament posted a chart on Twitter showing presidential election votes since 2000 spiking for Republicans in a number of heavily Orthodox precincts, including Brooklyn.

Ohio Gov. John Kasich, the third Republican candidate, also campaigned in New York City Thursday. In the afternoon, he sampled the fare at Mike’s Deli in the Bronx, and on the way out declared, “I love New York values,” according to WNBC.

On the Democratic side, front-runner Hillary Clinton, a former New York senator who is heavily favored to win the state, rode the subway, the 4 train, from Yankee Stadium to 170th Street in the Bronx, where she met with potential voters. She took a shot at her rival, Sen. Bernie Sanders, I-Vt., for saying in an interview with the New York Daily News editorial board that the subway takes tokens, though she reportedly had to swipe her subway card several times at the turnstile.

Trump, a Queens native and local real estate tycoon, and Sanders, who was born in Brooklyn, took the day off from campaigning.