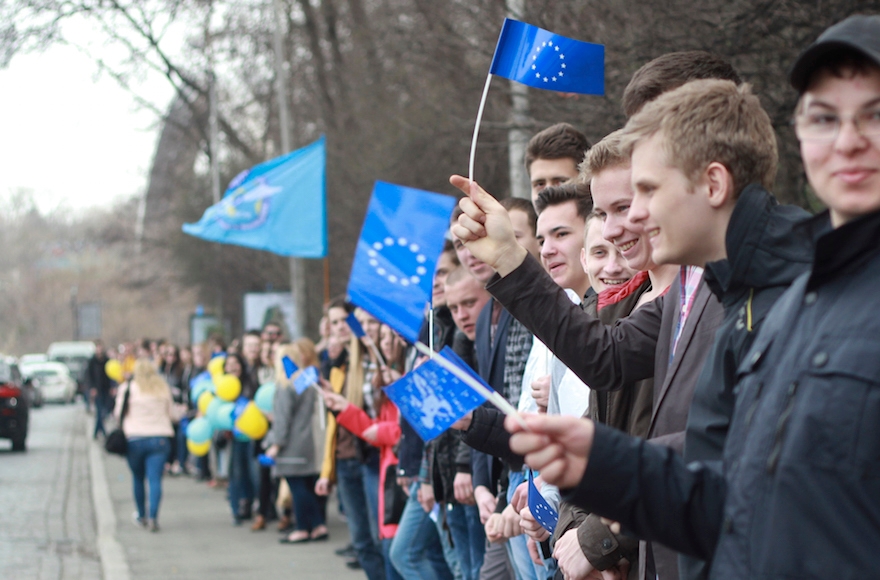 Ukrainian students forming a human chain in front of the Dutch embassy in Kiev to encourage the Dutch to support the upcoming referendum on a EU-Ukraine treaty. (Nazar Furyk/Pacific Press/LightRocket via Getty Images)
Advertisement

AMSTERDAM (JTA) — A treaty to increase European Union-Ukraine ties was dealt a blow when 60 percent of Dutch voters in a national referendum on the deal voted nay.

The leadership of Ukraine’s Jewish community had lobbied hard in favor of the treaty.

In an apparent expression of anti-EU sentiment, 60 percent of those who voted in the referendum Wednesday came out in opposition to the Ukraine-European Union Association Agreement. The treaty would remove trade barriers and promote military and scientific cooperation between the EU and Ukraine.

The Netherlands is the only EU member state that has not signed off on the treaty, which requires unanimous approval by all 28 EU members.

Ukrainian Jewish leaders had tried to publicly counter opponents’ claims the treaty would eventually bring Ukraine into the EU and thereby further burden the cash-strapped bloc.

In a Dutch-language plea for Dutch support of the treaty published in February, 19 Jewish community leaders from Ukraine cited the need to encourage Ukrainian democracy and oppose Russian expansionism, among other arguments. They also said Ukraine was essentially anti-Semitism free.

Prominent figures within the Dutch Jewish community disagreed and urged voters to consider Ukraine’s Holocaust-era record and what they described as its failure to seriously grapple with anti-Semitism today. Some 1.5 million Jews were killed on Ukrainian territory by Nazis and local collaborators during the Holocaust.

At a debate about the treaty Tuesday at an Amsterdam Jewish center, Tamarah Benima, a Reform rabbi and columnist for the NIW Dutch Jewish weekly, alleged Ukraine had not confronted its anti-Semitic past. She noted Ukrainian currency carries the portrait of Bohdan Khmelnytsky, a 17th century Cossack leader responsible for pogroms against Jews, and city streets are named after Stepan Bandera, an ally of Nazi Germany.

“This is not a country that’s ready to join the family of European nations,” she said.

Zissels was in the Netherlands as part of a last-ditch effort by Ukrainian Jewish leaders to lobby for a yea vote. Last week, Ukrainian Chief Rabbi Ya’akov Dov Bleich visited the Netherlands for a string of meetings on the referendum.

Ronny Naftaniel, chairman of the Dutch Jewish Humanitarian Fund, said at the debate that Ukraine’s anti-Semitism problem was irrelevant to the vote. “If this were the parameter, then Greece, Hungary and chiefly Germany, our biggest friend, are also untouchable,” he said.

Speaking to JTA, Bleich highlighted geopolitical considerations in favor of a yea vote, namely the need to support Ukraine in its conflict with Russia under Vladimir Putin, which in 2014 annexed Crimea from Ukraine.

“Putin is a bully, and you have to stand up to bullies,” Bleich said.

Ukraine has failed to stand up to its own bullies, who are guilty of anti-Semitism, corruption and human trafficking, argued Nachshon Rodrigues Pereira, a Dutch-Jewish cantor and political science student who opposed the treaty and organized the Crescas debate.

“Ukraine will bring 45 million people with values that we really don’t need in the EU,” he said, noting that Transparency International last year ranked Ukraine as the world’s 45th most corrupt country.