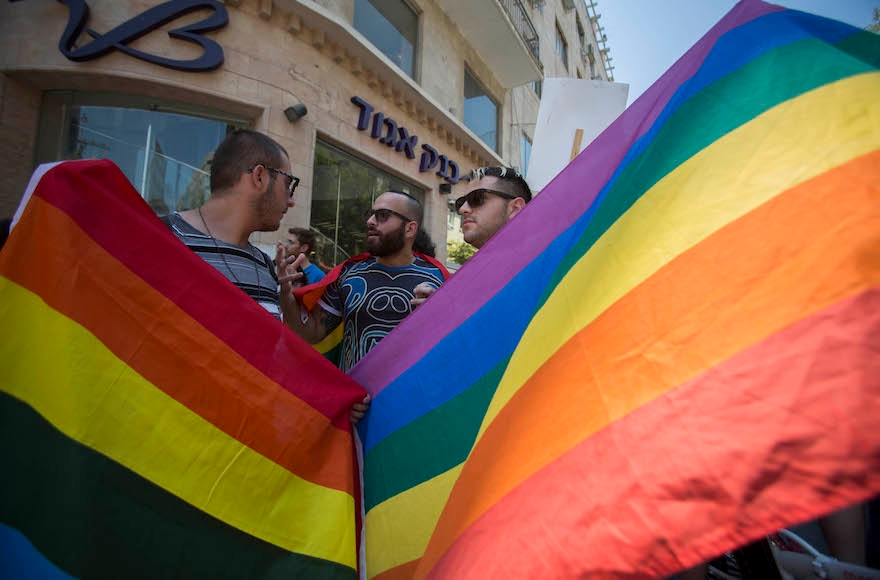 Activists and members of the gay community protest in Jerusalem on July 30, 2015. (Yonatan Sindel/Flash90)
Advertisement

(JTA) — An Orthodox rabbinic organization in Israel drafted what it said is the first Jewish legal document by such a group on how Orthodox communities in the country could include homosexuals.

The document by the nonprofit Beit Hillel, a rabbinical group of 200 members that promotes inclusiveness in Orthodox Judaism, “sets forth guidelines, which are founded in halachah, on how to include people with a homosexual orientation within faith communities,” director Rabbi Shlomo Hecht told JTA on Friday, using the Hebrew-language word for Jewish religious law.

Successful “inclusion,” he said, would help “people with a homosexual orientation to feel more comfortable within their Orthodox faith community.”

The document is set for publication Sunday at a conference titled “Halacha and inclusion – the religious community’s relations to homosexuals” in the city of Raanana, near Tel Aviv. Between 100 and 200 people are expected to attend the conference, which will feature discussions on the document and the issue of Orthodox homosexuals.

Hecht said his group stopped short of endorsing rabbinical officiation of any ceremonies that would, in the eyes of mainstream Orthodoxy, violate halachah, including gay marriages.

“We’re not recognizing any sort of homosexual unions – I mean, they exist, we don’t deny reality, but we don’t sanction them in an official form in the document,” he said. But he said the document does specify a number of halachic principles related to the need “to include homosexuals within faith communities and make them feel at ease in their community.”

Hecht declined to answer specific questions about the document prior to its publication.

He said the document was created in response to the fact “that homosexuals choose increasingly to remain within faith communities, which in the past they would leave because of their orientation. It used to be that you were either religious [Orthodox] or homosexual, but now you have both.” This change “creates a need for a halachic document that cements some principles for the relationship.”

CORRECTION: A previous version of this story translated the Hebrew word “hachalah” as “containment” and “lehachil” as “contain.” In this context, the words respectively mean “inclusion” and “include.”  JTA apologizes for the error.