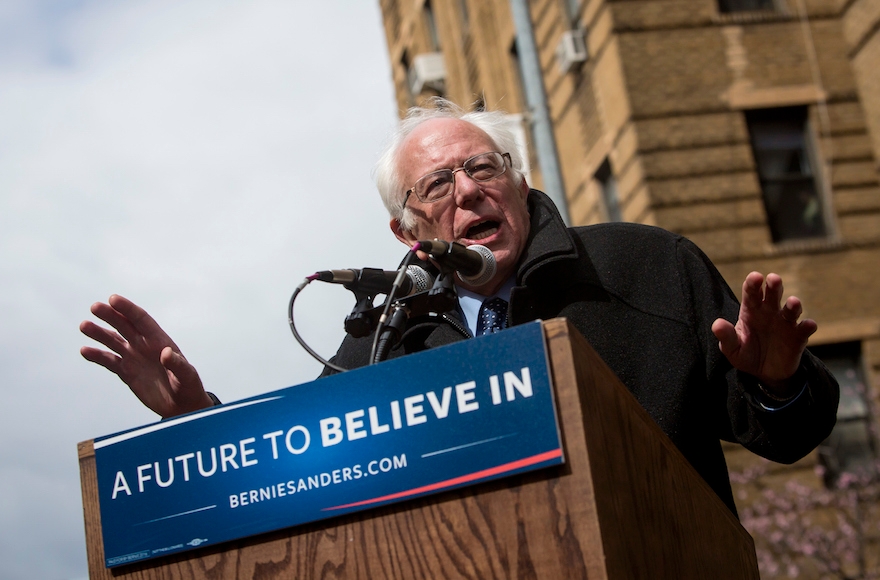 (JTA) — Bernie Sanders at a Harlem rally said he was proud to be Jewish in response to an anti-Semitic claim.

Sanders, the Independent senator from Vermont running for the Democratic presidential nomination, won applause with his answer Saturday at the historic Apollo Theater in the Manhattan neighborhood. The rally featured African-American celebrities and politicians who back his campaign.

A man asked Sanders, the first Jewish candidate to win major party nominating contests, about his Jewish identification and the time he spent in Israel in the 1960s, then expounded on theories of Jewish financial control.

“As you know, the Zionist Jews,” the man said, to rising cries of protest from the crowd, “they run the Federal Reserve, they run Wall Street.” Asked by a moderator to pose a question, the man said: “What is your affiliation to the Jewish community?”

“That’s not what you’re asking,” Sanders retorted. “I am proud to be Jewish.”

The audience erupted into applause.

Sanders has endeavored to peel away minority support from Hillary Clinton, the former secretary of state who is the Democratic front-runner.

“I am a strong defender of Israel, but I also believe that we have got to pay attention to the needs of the Palestinian people,” he said, to another extended round of applause.

The man continued to shout protests, and the crowd drowned him out, shouting “Bernie!”