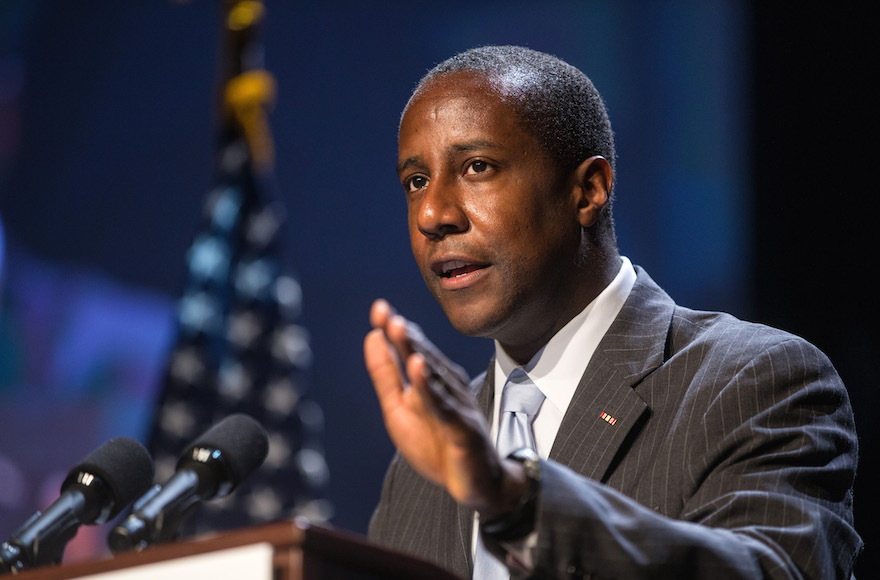 (JTA) — A meeting called by the mayor of a Boston suburb to discuss prejudice following a series of anti-Semitic and racist incidents was disrupted by people who wanted to talk only about anti-Semitism.

But Jewish students stood and spoke in favor of addressing all forms of prejudice, the Boston Globe reported.

Newton Mayor Setti Warren said he called the April 7 meeting to discuss several anti-Semitic and racist incidents in the community, especially in the local schools.

Jewish activists heckled an African-American woman who spoke of her son being slurred at school, the superintendent was booed and had to be escorted to his car by police and a woman held sign reading, “It’s not prejudice, it’s anti-Semitism,” according to the Globe.

The Jewish activists were led by Newton resident Charles Jacobs, who has campaigned for years against city school textbooks that he sees as Palestinian and anti-Semitic textbooks.

Warren, who is African-American, said that in addition to the anti-Semitic incidents, there have been racist issues on campus. He noted an incident in which racist questions were emailed to a black student group at Newton North High.

“I was chilled, and just as angry as when I heard about the anti-Semitism,” Warren told those attending the meeting.

Warren called on the crowd to show respect and try to understand their neighbor’s perspective.

The Globe quoted two Jewish students as speaking out against turning prejudice into a competition and in favor of the community uniting against all forms of hatred.

In a letter sent to the community following the meeting, Warren, who called the community meeting “difficult, but essential,” announced continuing steps to halt the problem, including hiring a civil rights attorney to work with teachers and students to address issues of prejudice and discrimination and tracking the progress made by the community .

“It will take work on the part of all of us to maintain Newton’s tradition as a welcoming, inclusive community,” Warren wrote. “It is not enough to acknowledge the groundbreaking work that came before us. Each community and each generation must keep up these efforts.”