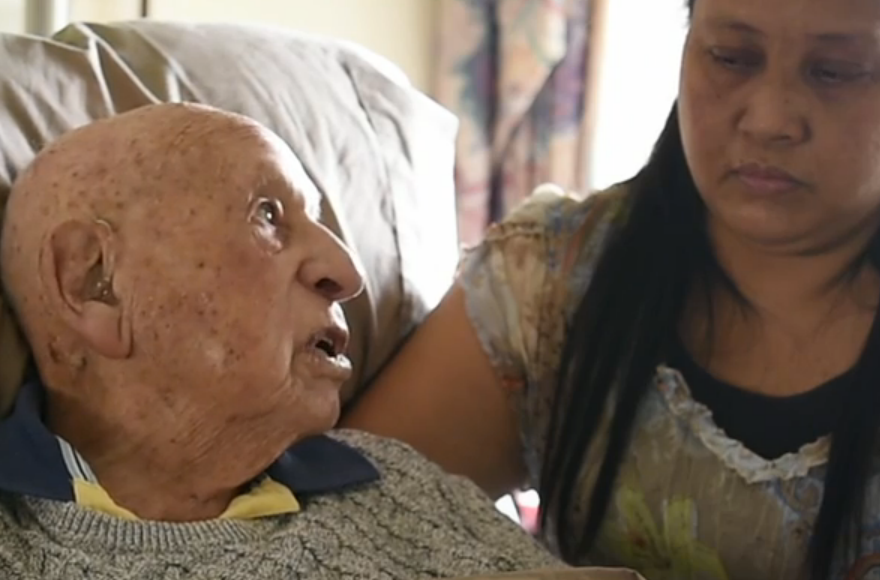 SYDNEY (JTA) — Australia’s oldest Holocaust survivor is at the center of a spat between his Filipina caregiver and the Australian government, which has made it clear that if she leaves the country she will not be permitted to return.

Elenita Fernandez, 43, was in Australia on a tourist visa when she began caring for Helen Roberts. Following the death of Roberts eight years ago, Fernandez fulfilled a promise to her to look after her husband, Richard Roberts, a Holocaust survivor who is now 103 years old.

But April 24 marks the 18th birthday of Fernandez’s daughter Manlyn Mae and the caregiver is desperate to be with her in the Philippines to mark the occasion. Lawyers have requested that Fernandez’s visa be changed to one that will allow her to reenter Australia, but the matter remains in the hands of the government.

Fernandez lives in the same house as Roberts, which is in Australian Prime Minister Malcolm Turnbull’s political district in Sydney. A spokesman for the prime minister told J-Wire: “We can assure Elenita that the due process is underway but it can take a year. Until a decision is reached she is welcome to stay in Sydney and care for Mr. Roberts.”

Richard Roberts told JTA: “I arrived in Sydney in 1938 from Vienna having obtained a permit in England. I spent time in both Dachau and Buchenwald concentration camps before being released and given a short time to leave the country. Australia has been wonderful to me. Now I am hoping that Lenie will be allowed to travel and return. We have bought a return air fare to show that she is coming back.”

As her daughter’s birthday approaches, Fernandez must decide if she is to risk traveling to the Philippines to be with her daughter and possibly forsake the opportunity of continuing to look after the man she has tended night and day for eight years.

“We are begging the government to give us a chance to let me go and return to look after Dick,” she told JTA.

When asked if she would instead join her daughter for her birthday on Skype, Fernandez replied: “My daughter has made it clear she does not want to celebrate her birthday without me there.”