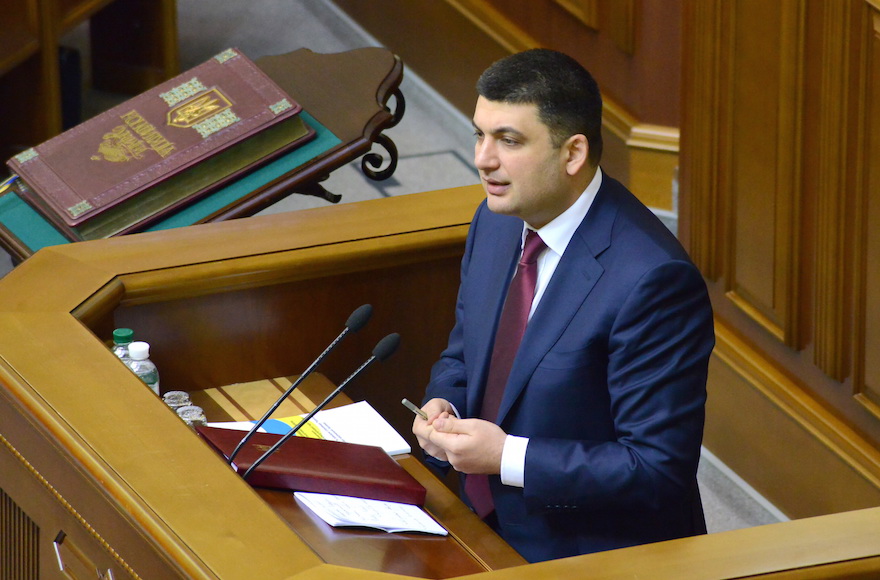 VINNYTSIA, Ukraine (JTA) — Like many Ukrainian mayors, Vlodymir Groysman used to visit his local synagogue on Rosh Hashanah and Hanukkah.

But unlike most of them Groysman, the former mayor of Vinnytsia, did not visit the synagogue as a political gesture. He was going in his private capacity as a member of his central Ukraine city’s Jewish community.

Groysman’s Jewishness is not very unusual, even for a mayor and senior politician in Ukraine, where 360,000 Jews live. But his openness about it was not customary in a country where anti-Semitism and decades of Communist repression once made it undesirable for politicians to be seen as too Jewish, said the local rabbi, Shaul Horowitz.

Last year, his reputation as an honest and effective administrator earned Groysman the title of speaker of the Ukrainian parliament. And this week, he was appointed prime minister by President Petro Poroshenko, make Groysman the first openly Jewish person to hold the country’s second highest post and, at 38, the youngest person to have the job.

Josef Zissels, a leader of the Vaad organization of Ukrainian Jews, pointed to Groysman’s ascent in politics as proof of the absence of serious anti-Semitism in Ukraine. Russia regularly points to the country’s alleged anti-Semitism to justify its conflict with Ukraine, including the annexation of Crimea.

“Clearly, Groysman’s nomination shows the opposite,” Zissels said of the claims.

Groysman’s nomination Thursday followed the resignation this week of Arseniy Yatsenyuk over his seeming failure to fight corruption and implement economic restructuring measures. Members of the coalition headed by Poroshenko approved Groysman’s nomination in a vote on a cabinet reshuffle following the resignation. Groysman’s successor as speaker is Andriy Parubiy, a member of Yatsenyuk’s rightwing People’s Party. Parubiy used to belong to the Social-National Party of Ukraine, a precursor of the far-right Svoboda movement, whose leaders have a record of anti-Semitic statements. Parubiy, who is not Jewish, is not known to have used such rhetoric and has himself come under attack in far-right circles where was labelled a Jew and a homosexual.

“I understand that we are in extremely difficult condition, that the government has a huge responsibility and the challenges it faces are simply enormous,” Groysman said Wednesday of Ukraine’s $17 billion debt to the International Monetary Fund, a financial crisis that has halved the national currency’s value against the dollar and the conflict with Russia. “I also know that with Ukrainian citizens’ support, we’ll strive to end the crisis.”

Horowitz is among those who believe Groysman will succeed where others have failed. The rabbi points to Groysman’s record as mayor in his native Vinnytsia.

“He’s a man of action who doesn’t talk too much but gets a lot done,” Horowitz said.

When Groysman, a lawyer with a background in business, became mayor in 2006 – at 28 he was the country’s youngest mayor ever — “the place looked like a Third World city,” Horowitz recalled.

“The roads were [in] disrepair, there were no street lights, fires broke out regularly,” he said.

But today, Vinnytsia, a sprawling city of 370,000, has a reliable tram system, one of Ukraine’s best-functioning train stations, street lights everywhere and three new hospitals.

“If Groysman does for Ukraine what he did for Vinnytsia, then he will have done something truly great for this nation,” said Koen Carlier, a Belgian national who lives in Vinnytsia, where he heads the operations of the local Christians for Israel group.

Endeavoring to jump-start his city’s economy, Groysman has made use of his ties in Israel. He has family in the city of Ashdod, which his 69-year-old father, Boris, visits regularly. In 2012, Groysman welcomed Israeli Foreign Minister Avigdor Liberman to Vinnytsia for the opening of a state-of-the-art medical diagnostic center that Israel built there.

That project demonstrated Groysman’s knack for using his broad network to meet the needs of his constituents and partners, according to one Ukrainian official who spoke to JTA under condition of anonymity because he is not allowed to speak to the media.

“With fears of growing international isolation, Israel was anxious to demonstrate that it has allies,” the official said. “Groysman knew this, and he also knew it was a country where politicians are accessible and act fast. So he worked out a symbiosis to benefit his own city.”

Groysman’s recent rise in Ukrainian politics owes a great deal not only to what but who he knew – especially Poroshenko, with whom he had had a close relationship long before Poroshenko became president. In 2012, Poroshenko, an oligarch who made his fortune from chocolates, opened Ukraine’s largest confectionery factory in Vinnytsia, adding thousands of jobs. Poroshenko, who became president in 2014, also was a partner in the construction of the Israeli diagnostic center.

Poroshenko asked Groysman to become speaker of the parliament shortly after assuming power following a revolution that ended with the ousting of his predecessor, Viktor Yanukovych. That bloody insurrection began amid claims that Yanukovych was a corrupt Kremlin stooge.

In interviews with the Ukrainian media, Groysman spoke of his grandfather Isaac’s survival during the Holocaust, when he pretended to be dead after being dropped by Nazis into a mass grave.

On Jan. 27, International Holocaust Memorial Day, when Groysman was the chairman of the Verkhovna Rada, the parliament, he asked other lawmakers to stand for a minute’s silence in honor of the victims of the Jewish genocide. It was the first time such a gesture took place in parliament.

“Unlike many who either try to hide their Judaism or just not talk about it, Groysman is a warm and open Jew because he’s part of a new generation in a new country,” Horowitz said.