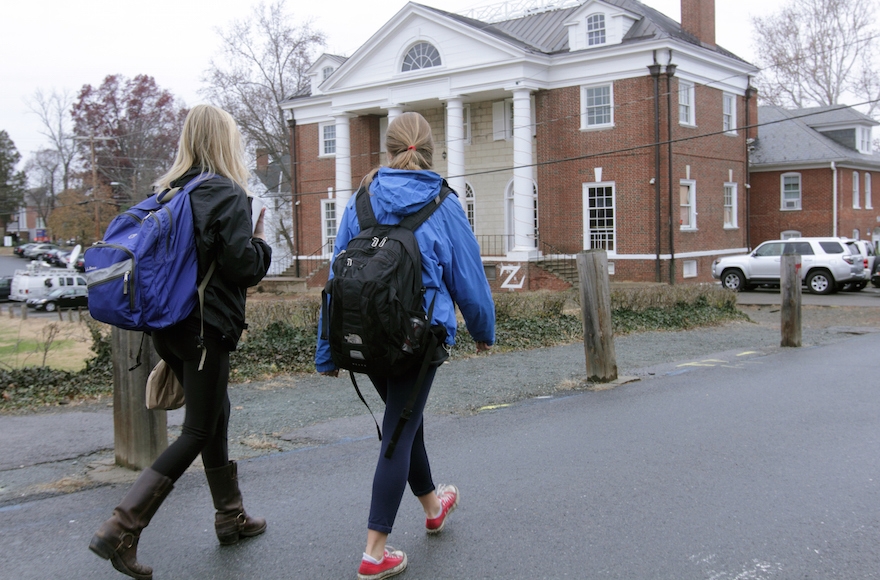 NEW YORK (JTA) – An Orthodox women’s group is calling for the ouster of a Teaneck rabbi from a synagogue conference after he penned a blog post dismissive of the problem of rape on college campuses.

Last week, Rabbi Steven Pruzansky of Bnai Yeshurun, a large Orthodox synagogue in the northern New Jersey township, suggested on his blog that many campus encounters characterized as rapes more likely were consensual sexual encounters in which the woman decided to call it rape only later because the man subsequently decided he wasn’t interested in an ongoing romantic relationship.

“There have even been occasions when the woman who later claimed she was ‘raped’ spent the night, or several nights thereafter, with her beau, only to realize weeks later after their breakup that she had been assaulted,” Pruzansky wrote. “If indeed there was a ‘rape culture’ on American campuses, no intelligent woman would want to attend college. The fact that more women attend college today than men itself belies the accusation.”

The blog post is raising hackles on social media and has prompted several angry columns in response.

Now the Jewish Orthodox Feminist Alliance is calling on the participants of a one-day educational conference scheduled to take place at Bnai Yeshurun in late June to withdraw their participation unless the venue is changed or Pruzansky, one of the featured speakers, is forced to withdraw.

“Pruzansky has been saying many wrong, sexist, hateful, racist, inciting things for years, but this is the straw that has broken the camel’s back,” Sharon Weiss-Greenberg, JOFA’s executive director, told JTA. “More needs to happen. I don’t think he should be the rabbi of a shul with hundreds of families, half women. I don’t think he speaks to the values of the Jewish people or of Orthodox Judaism. He’s been a chilul Hashem [desecration of God’s name] for a long time.”

The conference scheduled for June 26 is a day of study called Building Strong Families Together and cosponsored by a host of community organizations, including the Orthodox day school Yavneh Academy in nearby Paramus. The head of Yavneh did not return a call for comment from JTA.

Bnai Yeshurun is one of the largest modern Orthodox shuls in America, with more than 800 members and six daily morning services. Pruzansky has long been at its helm.

Pruzansky told JTA that the brouhaha over his blog post is due to a culture of political correctness that seeks to “conceal obvious truths,” and that the main thrust of his argument was the problem on campuses isn’t rape culture but “a culture of promiscuity and entitlement” surrounding sex.

Asked how he would respond to JOFA’s call that he withdraw from the June 26 day of study at his synagogue, Pruzansky laughed.

“They don’t have that power and someone should tell them that,” he said. “Part of the problem we’re dealing with is that the professional activists are sensitive to certain code words, and if you use the words in a way they don’t prescribe for you, then you have run afoul of their political correctness. What is ironic is people want rabbis to be leaders, and when they try to lead they cut them off at the knees.”

The Rabbinical Council of America, the centrist Orthodox rabbinical association on whose executive board Pruzansky once sat, told JTA, “While Rabbi Pruzansky raises some important points regarding sexual behavior on college campuses, the RCA rejects the tone and much of the substance of his recent comments regarding rape.”

This is hardly the first time Pruzansky’s words have prompted an outcry.

Before the assassination of Yitzhak Rabin in 1995, Pruzansky referred to the Israeli prime minister using the word Judenrat — a reference to the Jewish councils that were often accused of doing the Nazis’ bidding during the Holocaust — and blasted Israeli Jews who supported peace accords with the Palestinians as turncoats. His vitriol prompted the then-leader of the Anti-Defamation League, Abraham Foxman, to quit the shul.

In 2014, The New York Jewish Week complained that Pruzansky had compared the weekly to the Nazi paper Der Sturmer; Pruzansky replied that he was using an intentionally absurd comparison to highlight The Jewish Week’s use of what he called “vicious innuendo.” He also wrote a blog post called “Dealing with Savages” that suggested Israel deal with Arab violence by using live ammunition against rioters and stone throwers, razing Arab villages and executing Arab terrorists — then cremating their bodies, burying the remains with dead pigs, deporting their families, and destroying their homes and giving them to Jews.

Following that episode and the condemnation of his comments by the Orthodox Union and others, the board of Bnai Yeshurun said Pruzansky agreed to submit his writings to editors prior to publication. The process was to be reviewed periodically by the synagogue board.

Pruzansky told JTA this week that the board has not been involved at all in reviewing his blog. Bnai Yeshurun’s board president, Steven Margulies, did not respond to an email seeking comment.

UPDATE: This story has been updated to include a response by the RCA.

CORRECTION: An earlier version of this story referred incompletely to an allegation that Rabbi Pruzansky had compared The New York Jewish Week to the Nazi paper Der Sturmer. The story has been changed to include Pruzansky’s response.