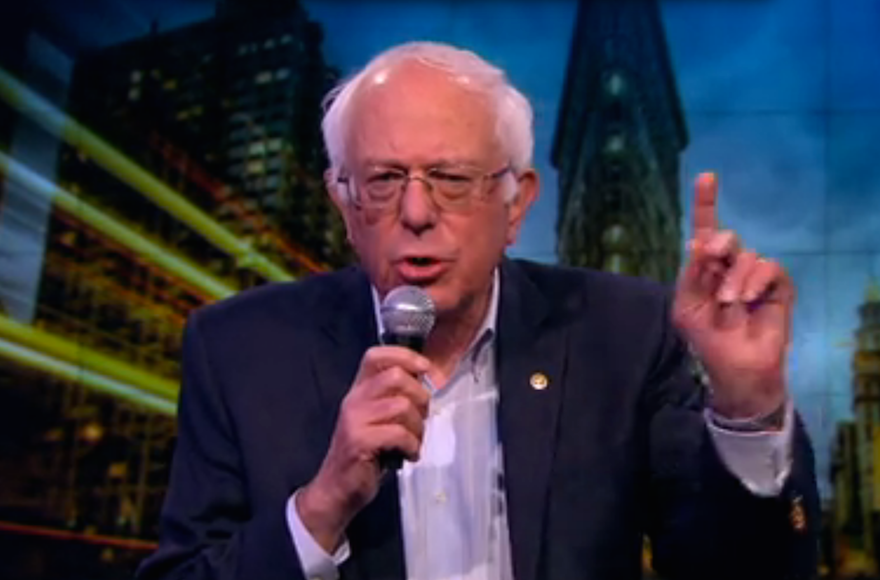 NEW YORK (JTA) — Brooklyn-born Jew Bernie Sanders may have moved to Vermont, but he still claims to know from “New York values.”

The Democratic presidential candidate delivered a four-minute monologue on the subject Wednesday night on Comedy Central’s “The Nightly Show,” skewering Republican candidates Donald Trump and Ted Cruz along the way.

“Mr. Trump, you wouldn’t know New York values if they were written in 50-foot gold letters on the side of the Empire State Building,” the Democratic presidential candidate said, referring to the signage on real estate billionaire Donald Trump’s Trump Tower in Manhattan.

Introduced as a “native New Yorker” by host Larry Wilmore, Sanders first went after Cruz, a senator from Texas who mocked liberal “New York values” at a debate in January.

“And you know what New York is? It’s a place built by the backbreaking work of immigrants — immigrants like your family, Ted Cruz,” he continued. “And when you say having New York values is a bad thing, you insult my city, my state, my culture and my heritage. I am the son of an immigrant, and I am proud of it.”

Sanders was born in Williamsburg, Brooklyn, to Polish-Jewish immigrants. After college, he spent a few years in New York City before moving to Vermont in the late 1960s.

The former New Yorker has taken some flak over the past couple weeks for saying that he thought city subway riders use tokens (and not MTA metro cards) in an interview with the New York Daily News editorial board.

“I was born and raised in Brooklyn. BK, stand up, fight back, don’t let anyone tear us down,” the Independent senator said Wednesday night. “I will never lose the values that New York and my family have given me.”

Cruz was born to a Cuban father in Canada before moving to Texas. Trump is the scion of a wealthy New York real estate family and still lives in the city.