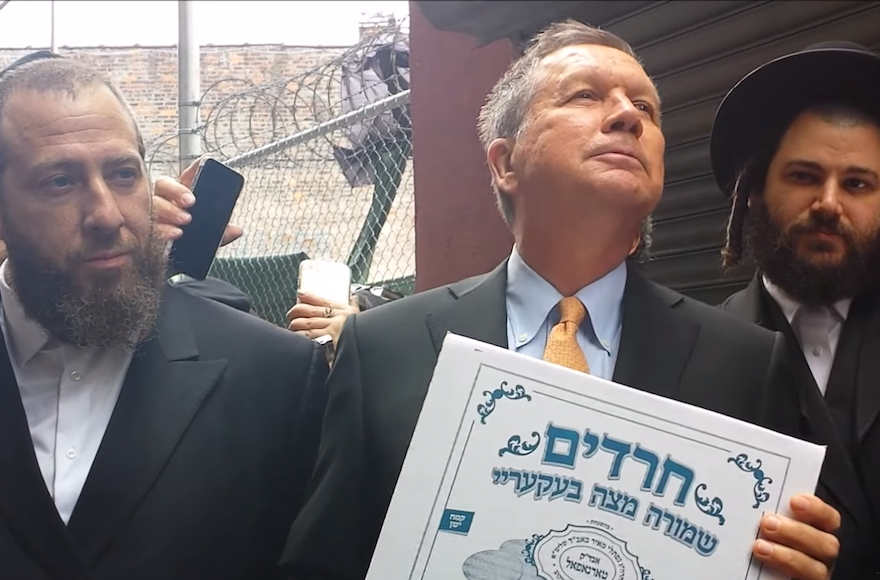 If Ohio Gov. John Kasich’s visit to Hasidic Brooklyn this week had yielded only one amusing moment, Dayenu – it would have been enough.

But, thank God, there were many in the Republican presidential candidate’s visit to a Jewish bookstore, shmura matzah bakery and school in Borough Park on Tuesday.

“It’s a wonderful, wonderful holiday for our friends in the Jewish community – the Passover,” Kasich told reporters after emerging from the matzah bakery, a box of the fresh-baked stuff in hand.

Yes, Jews are known to love The Passover, almost as much they love The Pre-Election Drop-By from vote-seeking politicians.

Flanked by Hasidic publicist Ezra Friedlander, Kasich then launched into a brief appraisal of the links between Passover and, um, the blood of Jesus Christ.

“The great link between the blood that was put above the lampposts” – er, you mean doorposts, governor — “the blood of the lamb, because Jesus Christ is known as the lamb of God. It’s his blood, we believe …”

Kasich’s only saving grace was that his remarks kept getting interrupted by the subway rumbling on the elevated tracks overhead.

Talking about Christ’s blood during a visit to Borough Park? Oy vey. Please, somebody, prep this guy. Hasidic Jews in Brooklyn want to hear about food stamps, affordable housing, Medicaid. Ix-nay on the Jesus-nay.

“He’s very knowledgeable and he takes his religion very seriously,” Friedlander later told JTA in an interview. “In context, I thought it was appropriate.”

Friedlander is a registered Democrat who plans to vote for Hillary Clinton in next week’s primary election.

Kasich also made the cardinal error of shaking his box of shmura matzah as he spoke to punctuate his remarks – a cringe-worthy move for Jewish shmura matzah consumers. If the high-priced, delicate matzahs inside are broken, they become unsuitable for ritual use.

Before visiting the matzah bakery, Kasich ran into a group of young Hasidic men at a Jewish bookstore in Borough Park.

“What do you guys do?” the governor asked.

“And what are you studying?” Kasich asked.

“OK, but what are you learning right now?”

“And what is your lesson?” Kasich pressed.

“Hilchos Shabbos. The laws of the Sabbath,” they finally responded.

“You know who I like?” Kasich finally said. “Joseph. You guys like Joseph? You study Joseph? What do you think about Joseph? Did you hear the most important thing Joseph said to his brothers?”

“My brothers, you meant it for evil, but God meant it for good,” said Kasich, an Anglican who was born Roman Catholic.

Toward the end of his visit, Kasich told his interlocutors, “Pray for me, would you?”

Having won just one state so far in the Republican primary contest, Kasich could use all the help he can get.