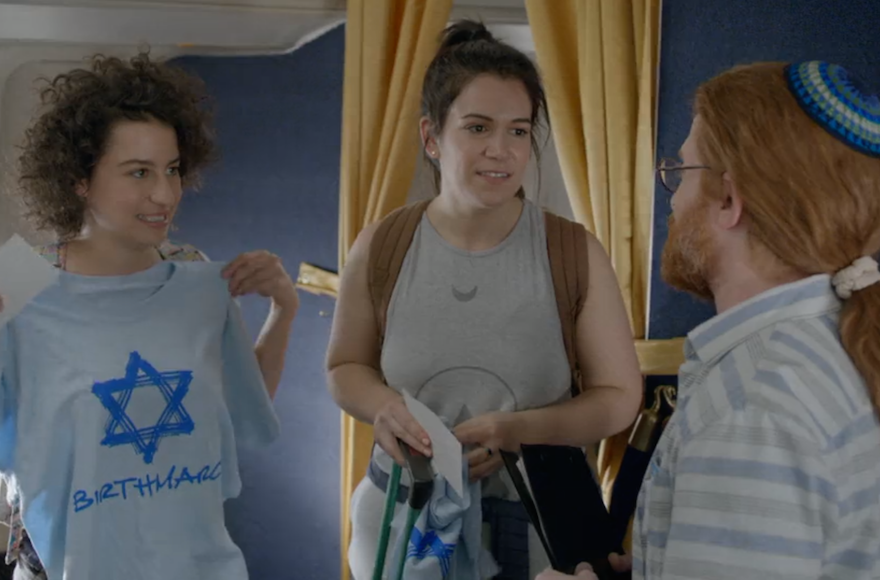 The “Broad City” ladies make some sort of Jewish reference or joke in almost every episode of their Comedy Central show. But Wednesday night the real-life Jews took on their Jewiest topic yet: the free Birthright trip to Israel.

After spending most of the episode struggling to catch their flight, Abbi Abrams (Abbi Jacobson) and Ilana Wexler (Ilana Glazer) board the “El Ol” airplane just in time — and enter a satirical world of modern Jewish identity and anxiety that is at turns so exaggerated and so spot-on it’s hard to keep from squirming while laughing.

Abbi and Ilana are welcomed to “Birthmark” by Jared (Jewish guest star Seth Green), who sports a blue-and-white kippah and an absurd long red ponytail. Awkwardly putting a hand on Abbi’s shoulder, he explains that the trip is as much about the “reproductive future” of the Jewish community as it is about Israeli history and culture.

Jared then halts the conversation to start a chant of “Jews! Jews! Jews!” All the 20-somethings on the plane, many of them wearing kippahs, join in, pumping their fists in the air.

Abbi reminds Ilana they’re on the trip because Israel is like “Africa for Jews” — not, as Ilana puts it, because it’s free. But Jared then tells the best friends they can’t sit together because they have been seated according to “match potential.”

“You’ll meet somebody very nice, I’m sure,” he says.

When Ilana is unimpressed by her “match,” a self-described 26-year-old accountant who writes short stories in his spare time, Jared gives her the Jewish mother treatment, saying, “Would it kill you to try?”

In the span of a few minutes, “Broad City” manages to make light of the most acute anxieties, quantified by Pew, driving Birthright Israel and other Jewish communal groups to action: Waning Jewish identity among young Americans, disinterest in Israel and intermarriage.

Birthright may not literally want 18-to-26-year-olds chanting “Jew” en route to the Jewish Africa, or being seated to maximize matchmaking potential. But as spokeswomen for secular American Jewish millennials, Abbi and Ilana lay bare just how nutty Jewish tribalism can seem to their demographic.

Glazer and Jacobson’s plan to film an episode of the show’s next season in Israel was nixed by the recent wave of violence there. But next week’s season finale (entitled “Jews on a Plane”) will depict the rest of the Birthmark flight. If it’s anything like the last few minutes of this week’s episode, Jews have a lot more uncomfortable laughter to look forward to.