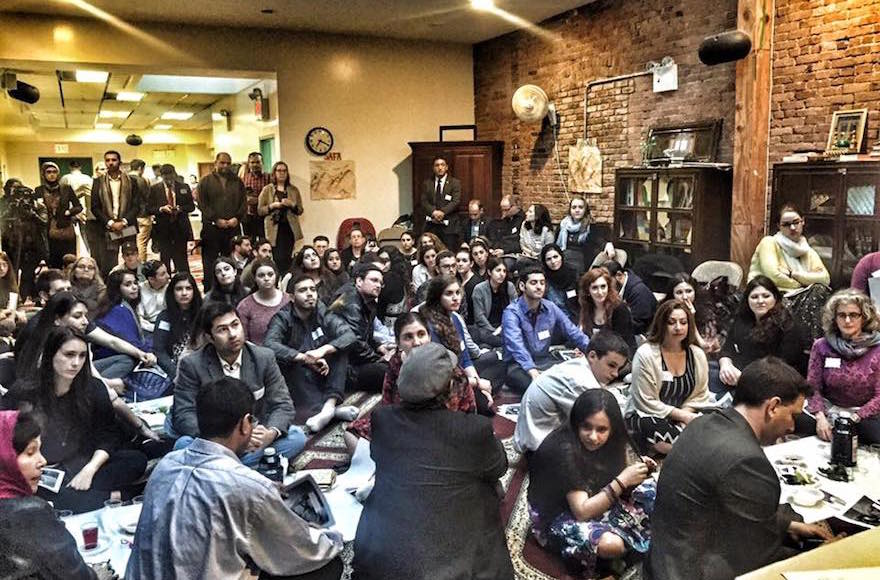 Jews and Muslims participating in a seder at the Islamic Society of Mid-Manhattan, organized by the NYC Muslim-Jewish Solidarity Committee, April 14, 2016. (Facebook)
Advertisement

NEW YORK (JTA) — Some 100 Jews and Muslims participated in a Passover celebration at a Manhattan mosque.

“I don’t believe anything quite like this has happened in New York before,” said Rabbi Allison Tick Brill of Temple Emanu-El, a large Reform congregation in Manhattan.

“It is particularly powerful to celebrate Passover here at this mosque because unfortunately, Muslim Americans are made to feel strangers in their own country,” Tick Brill said at the event, according to News 4.

“Isn’t it beautiful to have our Jewish brothers and sisters in the mosque?” Imam Ahmed Dewidar said. “I think we should be proud of our community here in New York.”

At the pre-Passover seder (Passover begins at sundown April 22), tables were set up on the floor, each holding its own seder plate.

Participants read from a custom-made haggadah, which consisted of both traditional Passover texts and modern additions such as Bob Marley’s reggae classic “One Love.”

Michelle Koch, of the NYC Muslim-Jewish Solidarity Committee, told News 4, “There’s so much hatred and prejudice going on in the world, because people are afraid of each other and are ignorant of each other. So I think as a committee, you bring people together. You teach people about each other.”

Nabil Ezzarhouni, also of the NYC Muslim-Jewish Solidarity Committee, said that at the seder, “There was a happiness that could not be translated into words.”

“It’s not just about Jews and Muslims, it’s about the whole society,” he said. “We want to set a standard, and we want to give an example to not just America, but to the whole world.”