5 seder supplements to make your Passover relevant this year 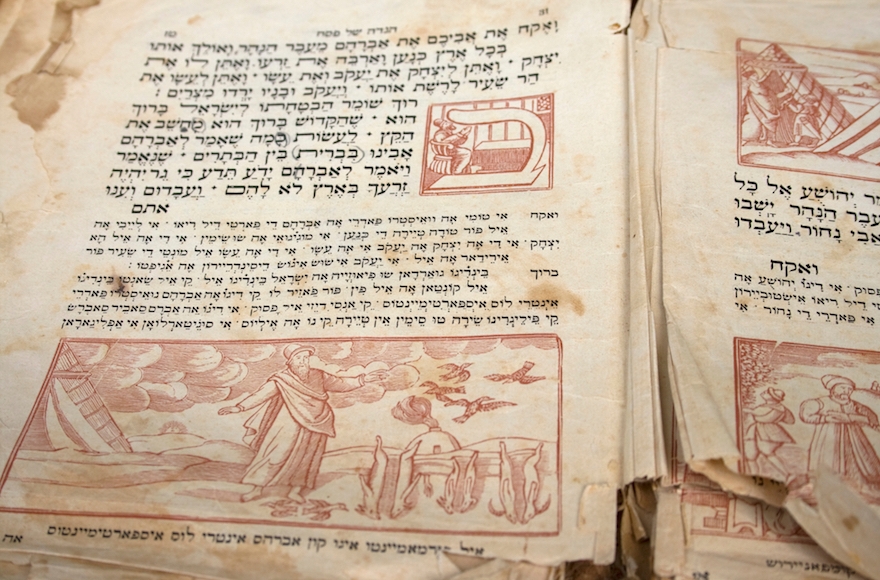 Sometimes an old Haggadah can use a little freshening up. (iStock)
Advertisement

(JTA) — We get it: Most Jewish families don’t yearn to make their Passover seders longer.

But there’s an entire world of seder upgrades and supplements out there providing myriad creative ways to freshen up the age-old tale of the Jews’ liberation from slavery in Egypt and — perhaps more significantly — make it relevant to our complicated, modern world.

You don’t need to be a scholar. You don’t even need to be particularly resourceful or ambitious — all you need is Internet access. Dozens of Haggadah supplements put out by Jewish organizations in recent years have addressed a variety of present-day social justice issues such as civil rights, poverty, hunger and genocide.

READ: How to make your own Passover Haggadah

Web sites like Haggadot.com, which houses a massive archive of Passover supplements, allow readers to print out inserts of all kinds, from new versions of the Four Questions to holiday-themed word searches for the easily bored. For those feeling motivated, you can quickly construct an entire customized Haggadah of your own.

Below we give your our top picks for supplements that will give your seder a social justice reboot.

The Passover seder famously celebrates the Jewish people’s exodus from Egypt — so it’s a perfect opportunity to raise awareness on modern-day movements of people.

The Syrian refugee crisis is perhaps the most discussed humanitarian issue of the past year. And HIAS, “the world’s oldest, and only Jewish, refugee resettlement organization,” is using the crisis’ moment in the headlines to shine a light on the plight of refugees fleeing turmoil across the entire globe. 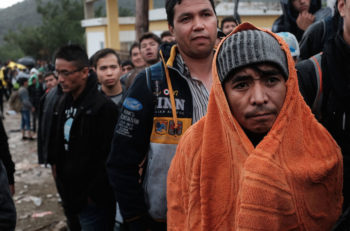 Migrants waiting to be processed at the increasingly overwhelmed Moria camp on the island of Lesbos in Mytilene, Greece, Oct. 21, 2015. (Spencer Platt/Getty Images)

Its nine-page Haggadah supplement compares the story of Jewish flight from Egypt to the stories of modern refugees fleeing places like Congo and El Salvador.

“The Syrian refugee crisis is huge and devastating and the one that’s been most in the American news, [but] there are 20 million refugees in the world and 60 million if you include displaced people who have fled for the same reasons but haven’t crossed international borders so are not legally refugees,” Rabbi Jennie Rosenn, the vice president for community engagement at HIAS, told JTA.

The supplement also includes a list of 10 plagues facing modern refugees (including “workforce discrimination” and “lack of access to education” — good luck making puppets for those!), as well as an instruction for seder participants to leave a pair of shoes by a doorstep to symbolize that Jews have historically “stood in the shoes of the refugee.”

Less than a year after the Supreme Court case that declared same-sex marriage legal nationwide, LGBTQ rights are again a hot topic. North Carolina enacted a law banning anti-discrimination protections for gay and transgender people — drawing the high-profile ire of Bruce Springsteen — and Mississippi is poised to pass a law that would allow businesses to refuse serving LGBTQ couples.

Keshet, a nonprofit working to promote the full inclusion of LGBTQ Jews in Jewish life, has created a six-page “LGBTQ Celebratory Passover Resource Guide” that’s ripe for conversation this year. 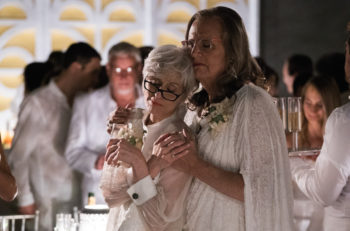 Jeffrey Tambor, right, with Judith Light in the second season of “Transparent.” (Courtesy of Amazon Studios)

Playing off of the traditional four children section, Keshet offers descriptions of four ideal LGBTQ “allies” to discuss, from the one who “asks what LGBTQ means” to the one who “comes out as an advocate to move equality forward.” The online, printable guide also includes its own list of 10 plagues —”apathy in the face of evil,” “envy of the joy of others” — and essays aimed at prompting discussion.

The Reform movement’s political outreach arm has produced nearly 10 Haggadahs and seder supplements over the past few decades, but its newest one focuses on the “illegal trade of people for exploitation or gain.” The supplement explains that over 20 million people, including 5 million children, are victims of human trafficking each year.

The Religious Action Center’s new six-page Haggadah supplement urges users to “remember that slavery didn’t end in Egypt, as many people around the world are victims of modern-day slavery and human trafficking.”

There’s a reading for the urchatz, or the ritual handwashing, portion of the seder, as well as an alternate blessing over the fourth cup of wine — “To truly address slavery, we cannot just free individual slaves but must also address the root causes of poverty, prejudice, and inequality that make slavery possible” — as well excerpts from texts on human trafficking by the likes of New York Times writer Nick Kristof.

4. Sexual assault on campus (Hillel International/It’s On Us initiative)

The past year has seen the emergence of some pretty scary statistics: At least one in four undergraduate women experience sexual assault at school and two-thirds of all college students say they have been harassed on campus. The issue made its way to the White House, and Vice President Joe Biden trumpeted the problem at this year’s Academy Awards.

Hillel International and the White House’s It’s On Us initiative, which was launched in 2014 to increase awareness about sexual assault on campus, have teamed up to produce a one-page Haggadah insert that poses discussion questions linking the Passover theme of freedom with the topic of sexual assault.

The first questions ask about personal freedom (“When is a time that you have not been free?”) more generally before getting into some darker specifics: “How does the reality of sexual violence impact how you experience freedom?” and “Have you intervened to help someone become free from a situation or potential situation of sexual violence?”

This supplement may have been written for Passover 2015 following the deaths of Michael Brown and Eric Garner, but it is no less relevant today. 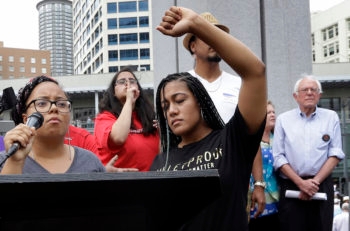 #BlackLivesMatter activists have made headlines for interrupting events throughout the past year held by presidential candidates such as Bernie Sanders and Hillary Clinton. In general, tensions between the African-American community and local police forces across the country remain untenably high.

The #BlackLivesMatter Haggadah extension provides alternate readings — For karpas: “The saltwater represents the tears of our ancestors in Mitzrayim,” it reads. “This year may it also represent tears of Black parents and families mourning the loss of their Black youth at the hands of police brutality” — as well as interesting essays, mostly written by Jews of color, including one on the traditional African-American spiritual “Go Down Moses.”

But the Haggadah doesn’t just raise provocative questions, it supplies statistics on police activity in places like New York City and Ferguson, Missouri. (Here’s one for NYC: “Between January 2004 and June 2012 the police stopped, questioned or frisked 4.4 million people.”)