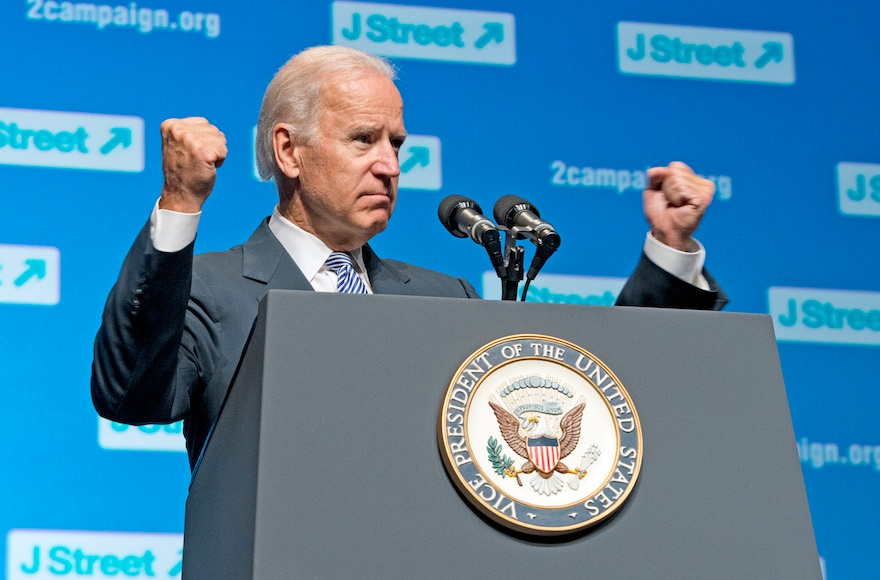 “I firmly believe that the actions that Israel’s government has taken over the past several years — the steady and systematic expansion of settlements, the legalization of outposts, land seizures — they’re moving us and more importantly they’re moving Israel in the wrong direction,” Biden told the liberal Israel advocacy group’s annual gala Monday evening.

Biden and Secretary of State John Kerry lavished praise on J Street for embracing the Obama administration’s push last year for a nuclear deal with Iran in the face of opposition from centrist pro-Israel sentiment.

Each speaker emphasized that the Obama administration had not given up on the two-state solution, although Kerry’s 2013-14 efforts collapsed into mutual recriminations between Israel and the Palestinians, and Israel and the United States.

“We continue to advance a two-state solution as the only solution because anything else will not be Jewish and will not be democratic,” Kerry said.

“For the next nine months we will not stop working to find” a solution, he said to applause.

There has been speculation in the media that the Obama administration will outline the contours of a final-status agreement between Israel and the Palestinians before the end of its term in January, although both the Israelis and the Palestinians are wary of any such move. Neither Biden nor Kerry offered specifics of how President Barack Obama planned to advance peace talks.

In an extraordinary moment, Biden asked Stav Shaffir, a Knesset member from the opposition Zionist Union camp, to stand up. Earlier in the evening, Shaffir had lacerated Netanyahu’s peace policies.

“May your views once again become the majority in the Israeli Knesset,” the vice president said.

In addition to his criticism of Netanyahu, Biden rapped the Palestinians for seeking statehood recognition outside the parameters of talks with Israel and for not robustly condemning terrorism.

“There is no political will among Israelis or Palestinians to move forward,” he said.

Biden delivered similar impressions last month in an address to the American Israel Public Affairs Committee, although in that instance, a greater proportion of his speech was devoted to defending Obama’s Israel record.

Biden and Kerry, as well as J Street, separately and strongly condemned the terrorist attack in Jerusalem on Monday, in which a bus bombing injured at least 21 people.