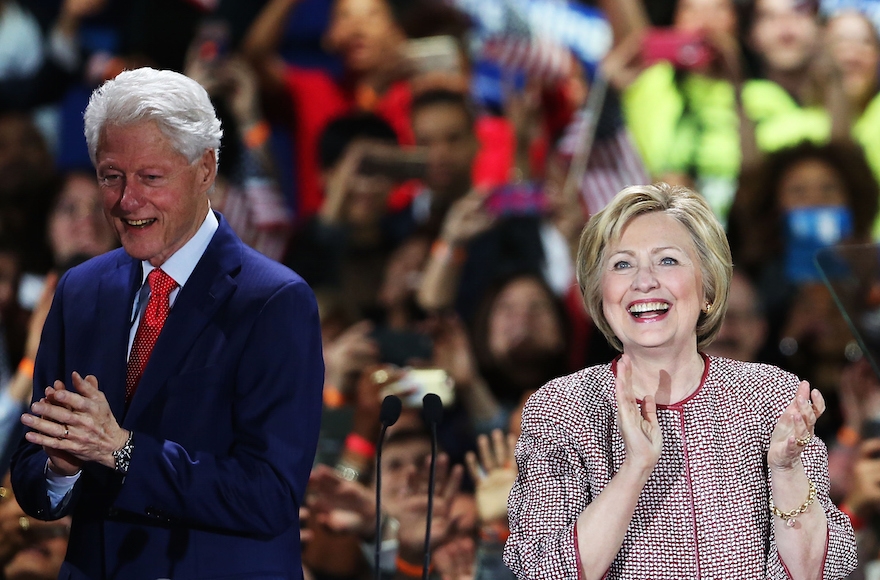 WASHINGTON (JTA) — Hillary Clinton grabbed a daunting lead over Bernie Sanders with an easy victory in the New York Democratic primary boosted by substantial wins in the New York City area, where much of the state’s Jewish population lives.

On the Republican side, Donald Trump won resoundingly, but Jewish voters may have denied him a sweep of the delegates.

Clinton, the former secretary of state, was leading Sanders, the Independent senator from Vermont, 58 to 42 percent, with nearly all the vote counted.

According to exit polls posted by NBC, 12 percent of Democratic voters statewide were Jewish, although the polls did not break down the numbers according to candidate.

Still, Clinton seemed to prevail in districts known to have large Jewish populations. In Kings County, or Brooklyn, the former New York senator led Sanders 60-40 percent and in New York County, or Manhattan, she led 66-34.

The victory in what is now Clinton’s home state pushed her number of pledged convention delegates to 1,436, and she also has the support of 469 superdelegates. The total of 1,905 has Clinton nearing the 2,383 delegates needed to win the nomination. Sanders has 1,192 pledged delegates and 31 superdelegates.

Ahead of the primary, the candidates clashed on Israel during a debate last week in Brooklyn, with Sanders challenging Clinton to show more evenhandedness to the Palestinians and to criticize the government of Israeli Prime Minister Benjamin Netanyahu.

In her victory speech, Clinton sounded a conciliatory note over what has become an increasingly bitter campaign.

“To all the people who supported Senator Sanders, I believe there is much more that unites us than divides us,” she said. Sanders is the first Jewish candidate to win major party state nominating contests.

Trump, a real estate billionaire, had 60 percent of the vote to 25 percent for Ohio Gov. John Kasich and 15 percent for Texas Sen. Ted Cruz with nearly all the vote counted.

The win will rekindle Trump’s hopes that he can win the necessary majority of delegates – 1,237 – to avoid a contested convention. His victory in New York brings him to 844 delegates, followed by Cruz at 543 and 147 for Kasich.

Still, wariness of Trump among Republican Jews seemed to be evident in the New York City area and denied him a coveted sweep of the state’s 95 delegates. Kasich won Trump’s home turf of Manhattan, and Cruz beat Trump in Orthodox Jewish neighborhoods like Crown Heights and Borough Park in Brooklyn.

Cruz, the most stridently pro-Israel candidate among the Republicans, campaigned hard among the Orthodox, including going to matzah bakery last week.

Trump has alienated many Republican Jews by saying at times that he would remain neutral in brokering Israeli-Palestinian peace, and also with his broadsides against minorities, including Hispanics and Muslims.