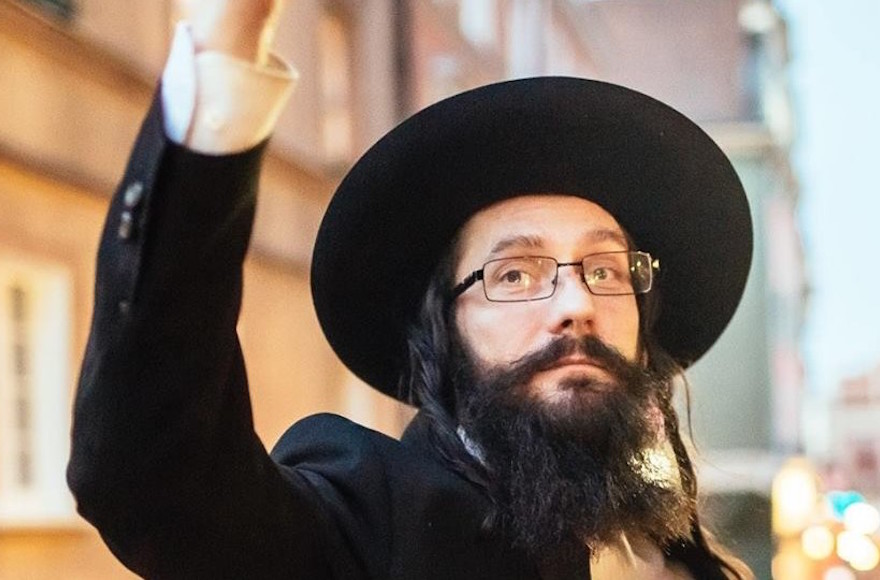 WARSAW, Poland (JTA) — The Polish reporter who revealed the imposter rabbi serving in Poznan said the Jewish community’s leader has insisted he stop writing about the case.

In a report published Monday, Glos Wielkopolski said Alicja Kobus, head of the Poznan Jewish community and vice president of the Union of the Jewish Communities in Poland, “threatened” the newspaper over the report several days earlier by Krzysztof Kazmierczak exposing Jacoob Ben Nistell, who claimed to be a rabbi from Haifa, Israel, but in fact was a cook from the Polish city of Ciechanow named Jacek Niszczota.

Kobus reportedly has tried in recent days to intimidate Kazmierczak, demanding that he stop writing about Nistell.

According to the Glos Wielkopolski report Nistell, who served the community for several years, is not Jewish, does not know Hebrew and is not familiar with Jewish customs.

In Poznan, Nistell ran a kosher kitchen for tourists from Israel and guests of the Jewish community, according to Glos Wielkopolski.

“He served food for our guests, but so what. Everyone has such a right,” Kobus, also vice president of the Union of Jewish Religious Communities in Poland, told the newspaper. “And he did everything from cooking to taking out the garbage.”

Nistell reportedly has disappeared from the community and deleted his Facebook page.

Kazmierczak said he has not met with any other negative reactions from Jews.

“True Jews and people interested in Judaism say it is very good that I revealed the sham,” he told JTA.

Kazmierczak said he believes Kobus knew for a long time that Nistell did not come from Haifa, especially since the imposter rabbi read Hebrew prayers in Polish transliteration.

Meanwhile, leaders of Polish Jewry have criticized the Poznan community’s lack of knowledge about the rabbi.

“It is said that the wild animals come where there is an empty space,” Shalom Ber Stambler, chief Chabad rabbi in Poland, told Glos Wielkopolski. “That’s what happened in Poznan; it shows that in a place where there is no real Jewry, bad things happen.”

Warsaw Jewish leader Przemyslaw Szpilman told JTA: “The Polish Rabbinate should read Glos Wielkopolski; many of them will learn something new.”

Szpilman called the revelation “a cosmic embarrassment to the Polish Rabbinate.”

“I knew from the start that this guy was in disguise. But the rabbinate for so long did not attempt to find out who is the man claiming to be a rabbi and taking part in community celebrations,” he said.

In a statement shared with JTA, Polish Chief Rabbi Michael Schudrich and Lesław Piszewski president of the Union of the Jewish Communities in Poland, said Nistell was never employed through the union.

“Mr. Jacek Niszczota, also known as Jacoob Ben Nistell, has never held a position of a rabbi in the Jewish Community of Poznan,” according to the statement. “Moreover he has never been hired by the Community. He is a private individual and has never represented the Union of the Jewish Communities in Poland nor the Polish Rabbinate. He visited Communal premises as a guest or a volunteer.”