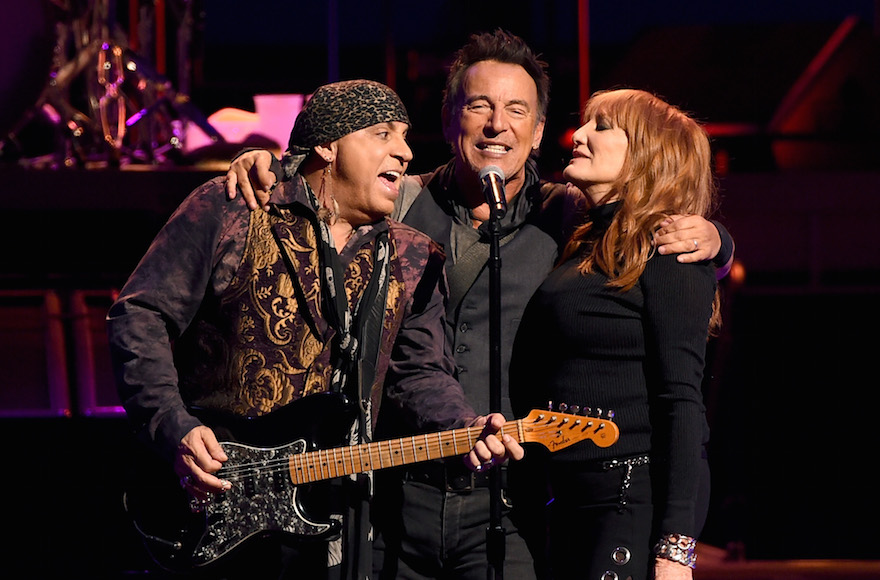 Amid rumors that Bruce Springsteen will perform in Tel Aviv this summer, he and his E Street band have come under fire from supporters of boycotting Israel.

On Monday, band guitarist Steven Van Zandt — who is also known for playing a mobster on HBO’s “The Sopranos” — responded in typically direct style. In a series of tweets, he called Israel boycotters “politically ignorant obnoxious idiots” and suggested to one “go f— yourself.”

Van Zandt has taken tweet heat before for the unconfirmed show. And he’s not alone among his bandmates.

Bassist Garry Tallent has been heckled by the Twittersphere. And self-described anti-Zionist Stanley Cohen, who has more than 20,000 Twitter followers, went after the Boss himself back in February.

@springsteen You’ve spent a lifetime writing about principle, dignity, justice and truth. Was it all a lie? Don’t play Israel. BDS

The latest BDS brouhaha emerged unexpectedly from a seemingly unrelated Twitter conversation. On Sunday, a fan bemoaned to Van Zandt Springsteen’s cancellation of a show in North Carolina last month in opposition to the state’s recently enacted “bathroom law,” which targets transgender people by requiring bathroom use according to the gender on a person’s birth certificate.

@StevieVanZandt @24thantherest could be worse. You could b like me & live in NorthCarolina with our backwards state legislature and no show

Another Twitter user then accused Van Zandt of touring other countries “which do much worse.”

@StevieVanZandt @stannc @24thantherest Yet you tour and support other countries which do much worse. You only hurt your fans. — Wahoos79 (@Wahoos79) May 2, 2016

Van Zandt responded that he held the U.S. to a higher standard.

That’s different. They are not OUR country. We are Americans. America is supposed to be better. To set an example. https://t.co/LfcXSsHZWQ — Stevie Van Zandt (@StevieVanZandt) May 2, 2016

In response to a skeptic who said “not buying that one,” the rocker got testy.

Nothing to buy because I ain’t selling. I’m telling it like it is. America even defends your right to stay ignorant! https://t.co/5wQpnGsEoe

When someone suggested he “quit justifying #hypocrisy,” Van Zandt got downright mad.

Ok asshole it’s time for you to go fuck yourself. Justify that. https://t.co/BCxcTEnxoi — Stevie Van Zandt (@StevieVanZandt) May 2, 2016

After some debate about what makes America so great, and whether it’s OK to call it America, the argument came around to the boycott issue. A user asked why, if Van Zandt gave other countries a pass, had he gotten involved in the movement against South African apartheid with the 1985 protest song “Sun City.” Van Zandt said that was about the U.S., too.

It was our government’s policy keeping apartheid alive. This was unacceptable and we fixed it and took them down. https://t.co/jC1i4yPTH3 — Stevie Van Zandt (@StevieVanZandt) May 2, 2016

Then, a certain Patrick — whose Twitter bio reads: “I have one issue human rights for Palestine people” — brought Israel into it.

@StevieVanZandt well we still in the apartied business supporting the rouge state of Israel wen will there be a Gaza city concert — patrick (@alonaq2009) May 2, 2016

This earned a double-tweet smackdown from Van Zandt.

You and the other Israel boycotters are politically ignorant obnoxious idiots. Israel is one of our two friends> https://t.co/jfLX5bAzyc

<in the Middle East. In addition to the fact that a boycott in that case would accomplish nothing. Go get educated. https://t.co/jfLX5bAzyc — Stevie Van Zandt (@StevieVanZandt) May 2, 2016

Trust me I am at least as aware of most of the injustices around the world as you are. One solution does not fit all https://t.co/ltIFARSRFq

Then he said it twice more.

The problems there have existed for a thousand years and you want the solution in 140 characters? https://t.co/JyrBwgWMLc

I understand how it might appear that way but your analysis is incorrect. It’s a lot more complicated than SA. https://t.co/RfQXimfwE8

Replying to Van Zandt’s assertion that boycotting Israel “would accomplish nothing,” someone tweeted, “But a boycott in north Carolina will?” Van Zandt had a simple answer for that one.