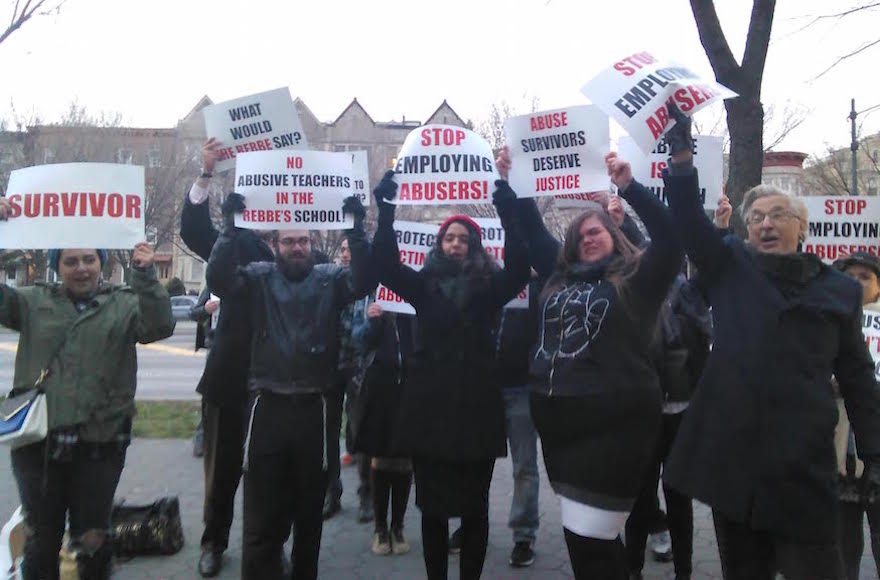 Orthodox activists, like these protesting outside a Brooklyn yeshiva, are asking institutions to do more to report and investigate allegations of child sexual and physical abuse. (Courtesy of Chaim Levin)
Advertisement

NEW YORK (JTA) – Advocates for sexual abuse victims in the Orthodox Jewish community will be descending on New York’s state capital on May 3 to lobby the legislature to eliminate the statute of limitations for child sex abuse offenses.

A bill to change the statute of limitations has languished for years in a state legislative committee committee, due in large part to opposition from the Catholic Church and Agudath Israel of America.

The bill, known as the Child Victims Act, would “completely eliminate the civil statute of limitations for child sex abuse offenses in the future,” according to SOL Reform, an advocacy group that is sponsoring a series of panels and news conferences May 3 and 4.

It would also suspend the civil statute of limitations for one year, during which time the accuser could bring a civil lawsuit against a private educational organization no matter how far back the alleged abuse dates.

While the bill passed the New York State Assembly, it has been blocked in the State Senate in the decade since it was introduced.

Agudah, which represents haredi Orthodox schools and synagogues, says the bill would open up institutions to “ancient claims and capricious litigation,” as the group wrote in a 2009 statement it issued with the haredi schools network Torah Umesorah.

“We do not oppose extending or even eliminating the criminal statute of limitations for cases of abuse,” Rabbi Avi Shafran, an Agudah spokesman, told JTA. “Our concern is simply protecting the economic viability of Jewish schools. Yeshivas operate on shoestring budgets.”

“They are most interested in keeping the civil lawsuits from happening because that is where all of the secrets and cover-ups come out,” said Marci Hamilton, a professor at Yeshiva University’s Cardozo School of Law and an organizer of SOL Reform. It “is about image and power.”

Criminal cases focus narrowly on the perpetrator’s actions rather than institutions that may have protected him, she says.

“Only through a civil case can you document an institution’s negligence and the way it failed children. The problem is that they won’t fix their internal procedures unless there are civil claims, because they don’t have to,” Hamilton said.

Among those advocating for the New York law are Chaim Levin, a Crown Heights resident who in 2013 was 23 when he won a $3.5 million civil judgment against an older cousin, Sholom Eichler, following accusations that Eichler had abused Levin when he was 8. Levin has not been able to collect any part of the judgment since Eichler fled to Israel.

Levin narrowly made it under the current statue of limitations for filing a civil lawsuit. According to Hamilton, studies show that most sex abuse victims do not come forward until they are in their 40s.

Other activists making the trip to Albany on May 3 are Hamilton; Meyer Seewald of the Orthodox-run anti-sexual abuse organization Jewish Community Watch; Manny Waks, CEO of the advocacy group Kol v’Oz, and Sara Kabakov, the author of an article in the Forward earlier this year describing the abuse she said she suffered as a child at the hands of the former rabbi and author Marc Gafni.

Levin says he expects the lobbying group to include 20 to 30 people. More than a dozen Jewish groups will be part of the lobbying delegation, and over 150 rabbis and community leaders, some of them Orthodox, have signed a letter organized by Kol v’Oz and addressed to the state legislature urging passage of the legislation.

READ: Founder of Orthodox muckraker blog Failed Messiah sells – but did he sell out?

The lobbying push in Albany comes amid allegations of abuse leveled against haredi-run schools, including a March article in Newsweek titled “Child Abuse Allegations Plague the Hasidic Community.” The article alleged that a prominent Chabad yeshiva, Oholei Torah in Crown Heights, Brooklyn, had ignored or downplayed reports of physical and sexual abuse against students.

Following the Newsweek report, Oholei Torah’s top administrator, Rabbi Shlomo Rosenfeld, wrote a letter to parents saying, “I can categorically assure you that there is absolutely no abuse taking place in Oholei Torah that we know of – neither sexual abuse, nor physical abuse, nor verbal abuse.”

“Those at Oholei Torah have buried their heads in the sand and want all of us to do the same,” Jewish Community Watch wrote. There is “willful disregard on the part of Oholei Torah directors and board members who possess factual knowledge of present and past physical and sexual abuse within the walls of Oholei Torah.”

Administrators at Oholei Torah did not respond to multiple phone messages and emails.

The increasing visibility of Jewish Community Watch, however, suggests that attitudes are changing within the Orthodox world itself.

The Orthodox newspaper Algemeiner Journal this year honored Seewald, 27, as one of the 100 people “positively influencing Jewish life” in 2015. 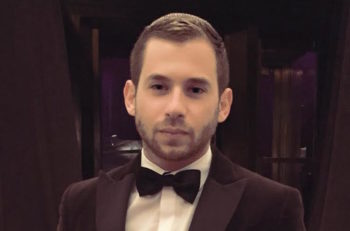 Meyer Seewald, the founder of Jewish Community Watch, says many in the Orthodox community are “more willing to come forward” about allegations of abuse. (Courtesy of Meyer Seewald)

Among other activities, Jewish Community Watch publishes the names of proven abusers and helps connect victims with therapists, currently paying fees for 80 people, Seewald said. The organization holds awareness-raising events in Orthodox communities such as Miami, Baltimore, Montreal and Israel.

“Without question, it’s so different now than even five years ago,” said Seewald, who grew up in Crown Heights and now lives in Miami. As a young boy he was sexually molested by a camp counselor, he said. And as a teen, a yeshiva schoolmate gave him a massage and put his hands down Seewald’s pants, he said.

“People are 100 percent more willing to come forward. Four years ago we were attacked beyond everything to show we weren’t credible. It was 10 percent of people supporting us. Now it’s 80 percent,” said Seewald.

“Leaders of the community have changed. Now they realize there are so many kids at risk, problems with marriage because of sexual abuse, they are supportive. Not yet publicly, unfortunately, but behind the scenes they will support the work we do.”

Jewish Community Watch now has a benefactor, Miami businessman Eli Nash. Nash, 30, told JTA he was sexually abused for three years, starting when he was 8, by a 14-year-old family friend, and physically abused by his teachers in first and fourth grades. When a teacher threw him against a wall it left bruises, said Nash, who also grew up in Crown Heights.

He and his brother have given about $1 million to Jewish Community Watch over the past two years and have pledged ongoing support. The organization now has 11 employees in Miami and Israel, and soon plans to open a Manhattan office.

“In the abstract everything’s changed,” he said. But “in the particulars, a lot more has to.”