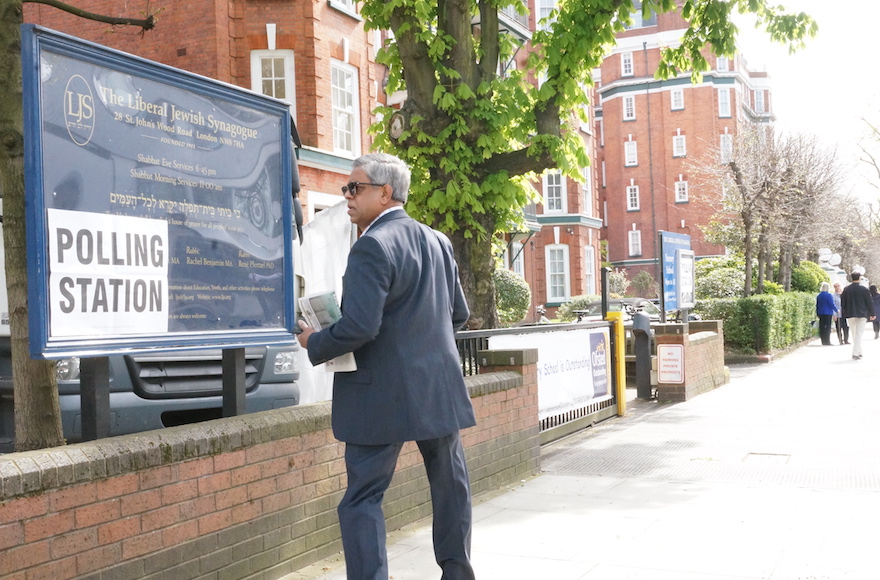 LONDON (JTA) — The British capital’s local elections should have been a walk in the park for Andrew Dismore.

A Labour City Council member representing the heavily Jewish boroughs of Barnet and Camden, he has exceptional credentials with the Jewish community, including the establishment of a national memorial day for the Holocaust in Britain in 1999, when he was a lawmaker in Parliament for Hendon, a London suburb with many Jews.

A staunch supporter of Israel who has visited Auschwitz several times, Dismore, who is not Jewish, has organized rallies against far-right politicians and actions against Islamist extremists as part of his fight against anti-Semitism.

But Thursday’s mayoral and London Assembly elections are overshadowed by a spiraling scandal within Labour over allegations of anti-Semitism, exposing even politicians like Dismore to punishment in the ballot box by voters they have successfully represented for decades.

“Yes, it’s a problem,” Dismore conceded Thursday in talking about what he called “the Livingstone effect” — a reference to former London mayor Ken Livingstone, a Labour member, who recently was suspended from the party after asserting that Adolf Hitler was a Zionist before he turned to genocide.

His statement, made during an interview in defense of a Labour lawmaker who was suspended for making a related argument, severely undermined Labour’s rearguard action against allegations that the anti-Israel affiliations of party leader Jeremy Corbyn were encouraging hate speech against Jews and Israel within Labour.

Even before the remark by Livingstone, which he insists is historically accurate despite round condemnations from the left, the right and various historians, Jewish community leaders labeled Labour untrustworthy because of Corbyn. A veteran leftist, Corbyn has refused to walk back his 2009 characterization of Hezbollah and Hamas as “friends” that he said he was “proud to host” in Parliament.

“Livingstone should be expelled from the party, he’s damaging its performance,” Dismore told JTA. He added that he is urging voters to remember his own record and that “this election is only about who runs London, not the country and its foreign policy.”

Labour’s mayoral candidate, Sadiq Khan, has also criticized Livingstone, calling his remark on Hitler “appalling and disgusting.” Khan, a Muslim of Pakistani descent, accused Corbyn last month of not doing enough to confront anti-Semitism, adding “when it comes to racism … nobody with these views should be in our party.”

Zac Goldsmith, the Conservative Party’s mayoral candidate, has hit Khan hard on Livingstone. Livingstone is “a strong supporter of Sadiq Khan and vice-versa,” said Goldsmith, 41, a lawmaker whose father was Jewish but who does not identify himself as a member of the Jewish community.

Dozens of Labour members have been suspended because of anti-Semitic or racist remarks in the past two months, though only 13 of the suspensions were announced publicly, The British Telegraph reported Monday. Amid growing criticism, Corbyn conceded Labour had an anti-Semitism problem after earlier denying its existence and toughened regulations against those seen to be spreading it.

The damage control was enough to retain Khan’s steady lead, with one recent poll showing Kahn leading Goldsmith by 57 percent to 43 percent.

But, as Dismore feared, the Livingstone effect is hurting Labour among London Jews, who make up about 2.5 percent of a population of 8.5 million.

Just 8.5 percent of British Jews would vote Labour in a general election, compared to 32 percent who had thought about backing Labour in the past 10 years, according to a Jewish Chronicle poll among 1,000 Jews published Wednesday.

Some voters believe the problem goers deeper than just Corbyn, Livingstone and a few bad apples.

Corbyn “unleashed something that had been there all along, but he gave it a new voice,” Howard Jacobson, a left-leaning British Jewish novelist and columnist, said last month during an interview with the BBC. Asked whether he expected Jews to vote Labour, he said: “I don’t see why they would right now.”

Peter Levy, a Jewish voter in the London elections, said anti-Israel attitudes that sometimes bleed into anti-Semitism are “an old latent sentiment within Labour.”

At the entrance to St. John’s Wood Synagogue, which on Thursday served as one of London’s hundreds of polling stations, Levy said he was still considering voting Labour because he was unimpressed with Goldsmith, but added: “I don’t know if I’ll go ahead with it.”

Khan, Levy conceded, “has ticked all the right boxes” when it comes to anti-Semitism and Israel, including rejecting calls to boycott the Jewish state.

“But I don’t know how much of it is genuine,” Levy said.

It was a reference to the fact that in 2009, Khan publicly advocated applying sanctions against Israel, where Levy’s daughter now lives. He has since changed his mind, saying in March that “we must not turn our face against Israel.”

Justin Cohen, news editor for London’s Jewish News, said Khan has “come a long way” on Israel and “cannot be expected to do more than he has to address the concerns of the Jewish community and engage with it.”

With the anti-Semitism debate reaching fever pitch just days before voting, supporters of the Conservative Party say they hope Goldsmith will land Labour its first painful defeat under Corbyn – even though many of them concede the Conservative hopeful has run “a weak and lethargic campaign,” as Tory voter Michael Dangor, a London Jew, said on his way to vote in shul.

“In a way, the anti-Semitism debate within Labour should have been opened up a long time ago because it has been broiling under the surface for years,” Dangor said. “And for the Conservatives, the timing is pretty good.”