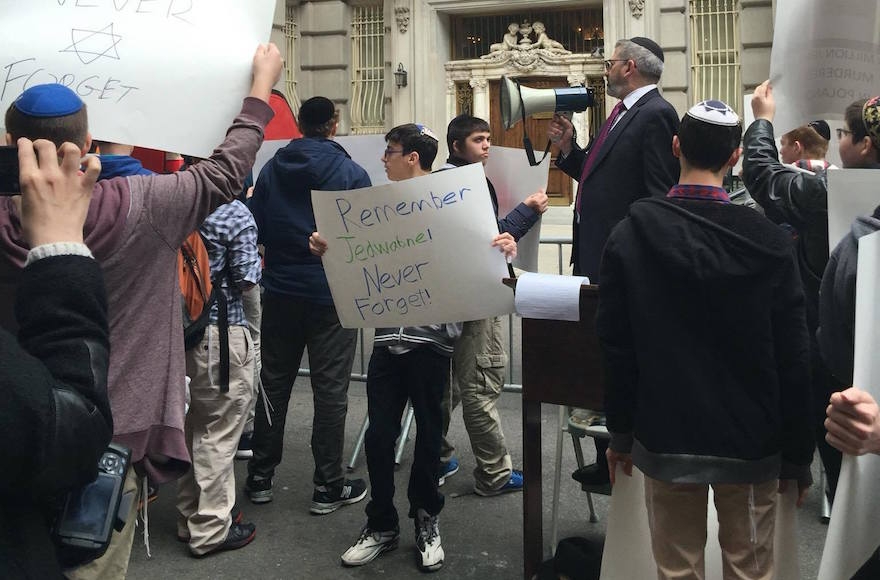 (JTA) — Some 200 demonstrators outside the Polish consulate in New York protested what they termed “attempts to deny Polish war crimes during the Holocaust.”

The rally was organized by Rabbi Zev Friedman, the dean of a suburban New York high school, in response to the interrogation last month of a Polish Jewish scholar, Jan Gross, by prosecutors concerning statements he made implicating Poles in the persecution of the country’s Jews during and after World War II.

Many of the protesters at the rally, held on Yom Hashoah, the day of Jewish mourning for the Holocaust, were students.

Gross, whose 2001 book “Neighbors” drew international attention to the murder of Jews by Poles in 1941 in the town of Jedwabne, wrote recently that more Jews than Germans died at the hands of Poles during World War II.

In response to his comments, Poland’s right-wing government, which has highlighted the actions of Poles who saved Jews from the Holocaust, initiated an investigation of the Poland-born, Jewish-American historian at Princeton University.

“The attempts of the government of Poland, which holds itself out to be a democracy, to stifle the free speech and historical documentation of an internationally acclaimed professor of history, smacks of charges one would expect to hear emanating from North Korea and other totalitarian regimes,” Friedman, the dean of Rambam Mesivta High School in the heavily Jewish area of Long Island known as the Five Towns, wrote in an email announcing the demonstration.

He also refuted claims by Poles that Jedwabne “was an isolated incident,” adding: “I’ve heard many survivors speak of the glee that their Polish neighbors had when Jews were being mercilessly persecuted.”

In March, Polish President Andrjez Duda said at an opening of a museum for saviors of Jews that “we must speak the truth about what had happened, the truth and the heroism, but also the sad truth about traitors.” Duda was a long-time member of the Law and Justice party, the Polish parliament’s largest bloc, which has promoted a nationalist view of recent Polish history and seeks to downplay the role of Poles in the persecution of Jews.

In response to Friedman’s protest, defenders of Poland’s role during World War II criticized him for what they said was an inflammatory misrepresentation of history that whitewashes German Nazi crimes and transfers them onto their Polish victims.

“I suggest that you make yourself familiar with the historical documents on Poland during World War II first and do not start a ‘blind’ anti-Polish campaign,” Marek Blazejak, a Polish expatriate living in Germany, wrote to Friedman.

Jonny Daniels, the British-Israeli founder of From the Depths, an organization that honors Holocaust rescuers, challenged the protesters at Thursday’s demonstration. He told JTA he understands the “concern of Jewish communities” whose impressions may have been formed in part by a “lack of communication” on the part of the Polish government. He said, however, he “cannot agree with inflammatory speech filled with falsehoods against the Polish government, which is reminiscent of the way Israel is singled out for criticism in some circles.”