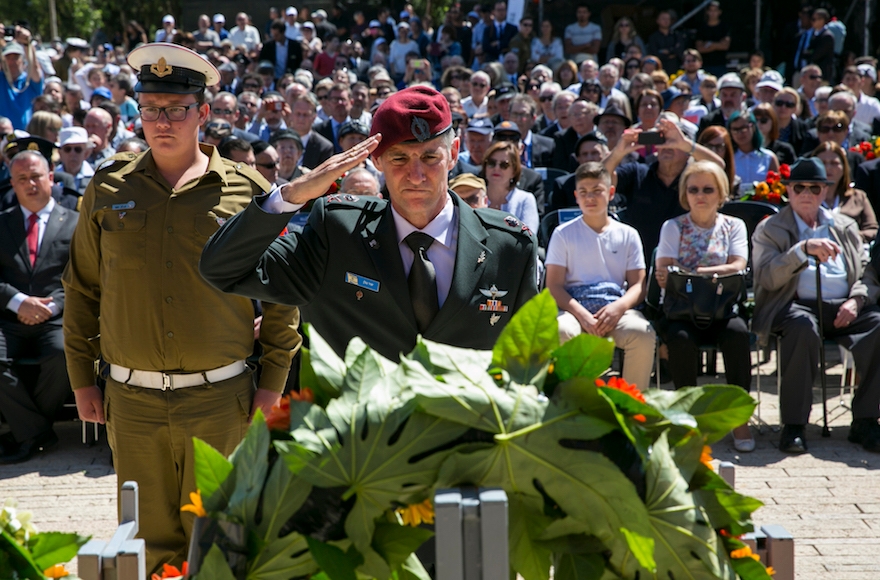 Deputy IDF Chief of Staff, Yair Golan, laying a wreath at a memorial during a ceremony at Yad Vashem as Israel marked its Holocaust Remembrance Day, May 5, 2016. (Olivier Fitoussi/Flash90)
Advertisement

JERUSALEM (JTA) — The Israel Defense Forces deputy chief of staff on Thursday clarified that he did not mean to compare Israel and its military to the rise of Nazism in Germany.

Gen. Yair Golan “did not intend to compare the IDF and Israel to what happened in Germany 70 years ago. Such a comparison would be absurd and baseless,” Golan said in a statement released by the IDF spokesman’s office and read on Army Radio. “There was no intention of creating any such parallel or to criticize the political echelons,” the statement said, also calling the IDF “a moral army that respects purity of arms and human dignity.”

Golan seemed to draw comparisons between what is happening now in Israel and pre-Holocaust Germany during a speech Wednesday evening, at the start of Yom Hashoah, or Israel’s Holocaust Remembrance Day, at a kibbutz in central Israel near Netanya.

“If there’s something that frightens me about Holocaust remembrance, it’s the recognition of the horrifying processes that occurred in Europe in general, and particularly in Germany, back then – 70, 80 and 90 years ago – and finding signs of them here among us today in 2016,” Golan said.

Golan called for Holocaust Remembrance Day to be a “national day of atonement” for such acts as “intolerance, violence, self-destruction and moral deterioration.”

“The attacks on him due to intentional, distorted interpretations of something he said yesterday, are an additional attempt of a worrisome campaign to inflict political damage on the IDF and its officers,” Yaalon said.

Israeli Justice Minister Ayelet Shaked, in Poland for the March of the Living, said in an interview with Army Radio that Golan was showing “contempt for the Holocaust” and had been “confused” when he made the comments.

Israeli lawmakers offered condemnation and praise for Golan’s message and his retraction. Several lawmakers also praised Golan’s message, but suggested that it was delivered at an inappropriate time.

Zionist Union chairman Isaac Herzog expressed support for Golan and called him a “brave commander,” in a Facebook post late on Wednesday night.

“Disturbed people who will start shouting now against him ought to know, this is what morality and responsibility sound like,” Herzog said.

Right-wing Jewish Home Party leader Naftali Bennett, who on Wednesday night expressed anger at Golan’s remarks and called on him to retract them, on Thursday praised the general’s clarification in a tweet. “That is fitting. He made a mistake, he corrected it.This is not the time for in-fighting. Let’s respect this day and be together,” Bennett tweeted.