Jewish Cabinet member on Holocaust day: ‘Fear of the other’ rising in US 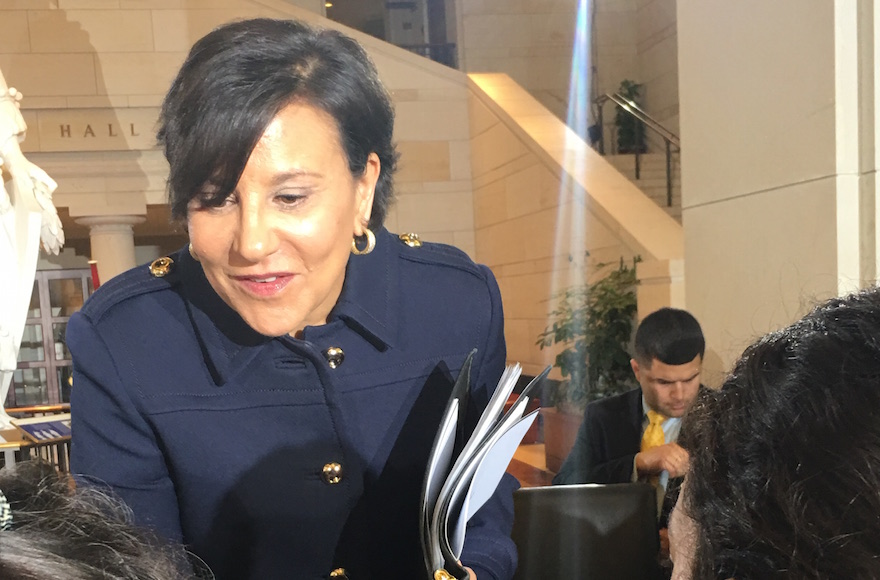 Penny Pritzker, the U.S. commerce secretary, mingling at event commemorating the Holocaust in the Capitol building in Washington, D.C., May 5, 2016. (Ron Kampeas)
Advertisement

WASHINGTON (JTA) — A top Jewish Obama administration official decried the rise of “the fear of the other” in the United States at an event marking Holocaust Remembrance Day, or Yom Hashoah.

“I do not think a Holocaust is happening in America, but I do worry about what is happening when we betray the principle of inclusion,” Penny Pritzker, the commerce secretary, said in remarks Thursday at the Capitol building.

“Today in our beloved United States, we are witnessing a rising fear of the other. We are better than the language of hate. America is not the tribe of folded arms,” Pritzker said, using a metaphor for the Germans who stood by while the Nazis rose to power and carried out the mass murder of Jews and others.

Pritzker did not name perpetrators of hate speech, but she noted rising feelings of insecurity among Hispanic and Muslim Americans, who have been the targets of broadsides by the presumptive Republican presidential nominee, Donald Trump.

“Do we sit with our arms folded while words are used to dehumanize other human beings?” she asked.

Pritzker, the scion of a Chicago hotel family, was one of Obama’s first backers.

Also speaking was Israel’s ambassador to the United States, Ron Dermer, who identified some extremes of anti-Israel rhetoric in present-day Europe, including in some cases in governments, with the anti-Jewish rhetoric that preceded the rise of the Nazis.