Brexit vote: What’s at stake for Jews in Britain 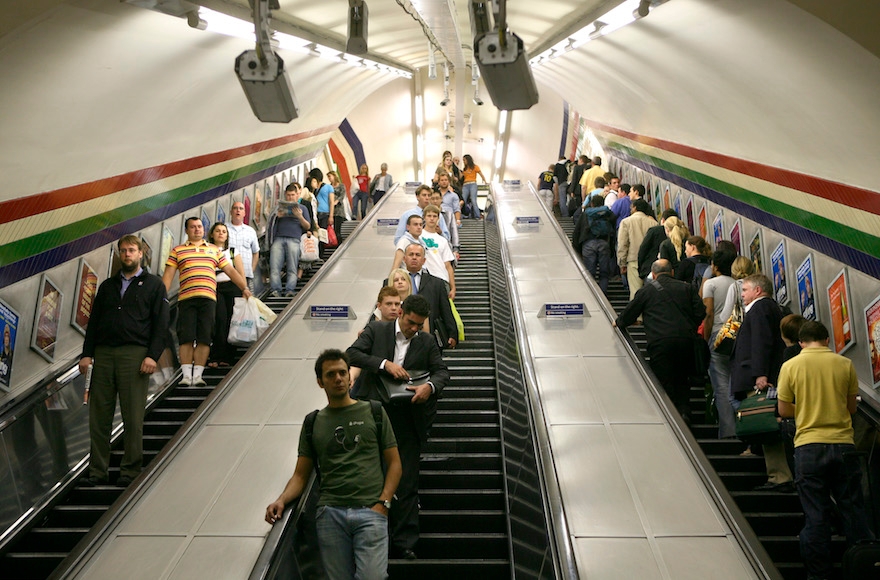 LONDON (JTA) — Less than two years after he moved his family from Paris to London, David Herz is already feeling at home in the United Kingdom.

The co-founder of a communications agency, Herz is among thousands of French Jews who moved across the channel in recent years. He says he immigrated mostly for financial reasons and is enjoying the added benefit of having his teenage children study in English in a good school.

Herz, his wife and three kids are part of the vibrant congregation of the Liberal Jewish Synagogue, which recently added services in French led by a rabbi from Strasbourg. The school and the synagogue, he added, are the pillars of his social life in his adoptive country.

But like millions living in Britain, the Herzes are now unsure of their future on the island kingdom as it prepares to vote on a referendum on staying in or leaving the European Union – a decision that could have far-reaching consequences for Europeans living and working in England, and for British workers on the continent.

“We’re in limbo,” Herz, 45, told JTA last month. “No one, including the government, seems to know what it would mean for us if Britain leaves.”

The June 23 vote on whether to “Brexit” or “Bremain” follows December’s vote in Parliament to put the decision to a referendum.

Occurring amid a debate over the EU’s authority over individual member states and their financial affairs, the Brexit issue is further complicated by growing tensions among lawmakers over foreign policy issues, including Turkey’s strained relationship with the EU and the migrant crisis.

As in elsewhere in Europe, Britain’s right-wing parties resent UK membership in the bloc. They say a Brexit would ensure Britain is not pressured into taking in some of the 1.8 million mostly Muslim migrants who entered Europe last year.

But Bremainers — including Prime Minister David Cameron, who agreed to a referendum to appease his Conservative Party’s right-leaning bloc — warn it would disrupt Britain’s economy and force millions of Britons living on the continent to return. The scenario triggered speculation that Britain might retaliate by sending millions of EU citizens living in the UK packing.

Despite Cameron’s campaign against the Brexit — U.S. President Barack Obama controversially endorsed his position in a joint news conference last month with the British premier — polls suggest a 50-50 split. 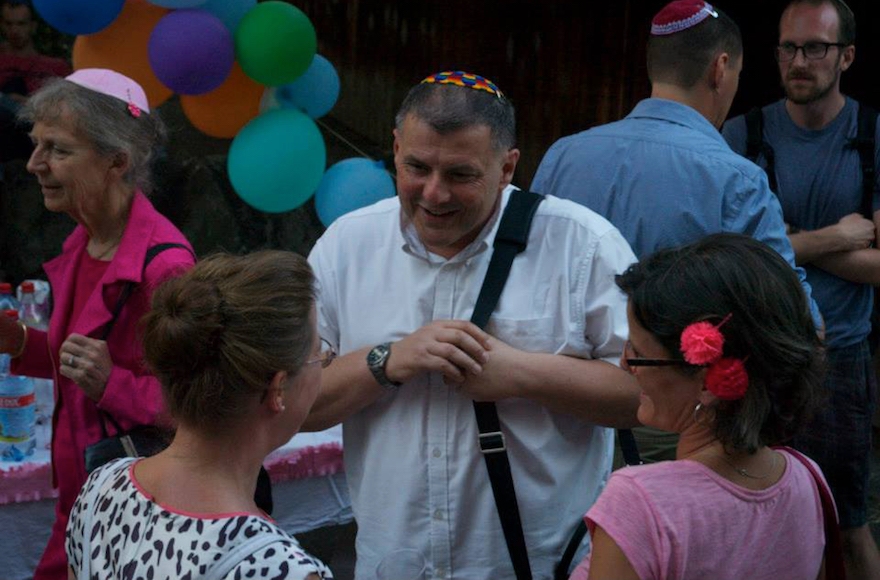 Rabbi René Pfertzel, center, came to Britain 15 years ago to study and ended up staying. (Courtesy of Pfertzel)

Surveys remained too close to call even after the murder of Jo Cox, a Labour lawmaker and mother of two who had campaigned against Brexit, by an alleged far-right extremist. Still, some commentators insist that the June 16 stabbing near Leeds in northern England may hurt the Brexit camp, causing voters to veer left.

British Jews are divided on the issue, according to Justin Cohen, news editor at London’s Jewish News daily. But among Europeans living in Britain, including French-speaking Jews, Brexit is seen as a disruptive choice born out of fear and arrogance.

“In France, we see fear taking the form of xenophobia, as a rising National Front party reaches new popularity,” said the Herzes’ rabbi, Rene Pfertzel, who came to Britain 15 years ago to study and ended up staying. “In Britain, it assumes the form of Brexit isolationism. But it comes from the same source.”

For French Jews, Britain is attractive because it has lower taxes than France, more employment opportunities and a large Jewish community of some 250,000 people — Western Europe’s largest after France’s own 500,000 Jews. Plus, Paris and London are only a two-hour train ride away, facilitating family visits.

Under EU agreements, citizens of member states may relocate and work in any of the bloc’s 28 member states without requiring permission, often simply by registering as residents with their EU passport with the local municipality. For Europeans, a Brexit is expected to mean some sort of application process for residence in the UK, possibly involving a vetting process by British immigration authorities.

The ability to escape anti-Semitism is among the arguments for remaining in a union that allows individuals greater freedom to move among member states.

“The risks are the same risks, guards are sadly necessary in synagogues here and in France,” said Sacha Bielawski, a 38-year-old father of two who came to London 10 years ago from Paris and works in finance. “I feel equally safe and unsafe in both countries.”

Linda Borowski, a computer specialist from Brussels who moved to London 10 years ago, says she is now in the process of immigrating to the United States because of the threat of jihadism.

“My children are targets here every bit as much as in Brussels,” she said. “I don’t want to raise them in fear or under guard.”

Herz said the British media was playing up the risk to Jews in France and portraying Britain as a refuge in what he called “French bashing.” Jewish immigration to London “is part of a major wave of general emigration from France” and is not specific to Jews, he said.

Whatever the reason, the recent arrival of hundreds of French Jews to Britain led to the establishment of Francophone Jewish communities in three London synagogues and the formation of predominantly French-speaking classrooms in at least one Jewish London school.

Many of the French Jews of London have little to fear even in the event of Brexit, said Bielawski.

“A realistic solution will be found to the visa issue,” he said. “The London finance industry and market is full of foreigners; they will have to be reasonable if they want to avoid a collapse.”

But newcomers like the Herzes are less certain than longtime residents, who have accumulated various rights over time, including to vote in some local elections and referendums. In the Brexit referendum, however, only British, Irish and Commonwealth citizens who live in the UK may vote.

British Jews are far more divided on the issue than the French Jews among them.

Robert Halfon, a British-Jewish lawmaker, argued in a March op-ed in The Jewish News that remaining would allow London to positively influence EU policy on Israel.

But Geoffrey Alderman, a historian and former member of the Board of Deputies of British Jews, disputed the point. In an op-ed the same month in The Jewish Chronicle, he asserted that British Jews are better off lobbying for communal interests in London, which they know, than in Brussels, where they have less sway and which is perceived as more hostile to Israel.

Days before the vote, Cameron used the Israel argument in a last-ditch effort to muster Jewish votes for Bremaining. “Do you want Britain — Israel’s greatest friend — in there opposing boycotts, opposing the campaign for divestment and sanctions, or do you want us outside the room?” Cameron said on June 20 during an address at a Jewish health and social services charity.

Guy Bechor, a prominent Israeli historian and a columnist for Yedioth Acharonoth, disputed this assertion, noting Britain’s own record on Israel within the EU is sometimes less than satisfactory to its supporters. While Britain is Israel’s largest EU trade partner, it is also one of only three EU states that use separate labeling for settlement goods — a practice Israel vociferously opposes.

And in the 68 years since Israel was founded in territory once controlled by Britain, no member of the British royal family has ever visited Israel in an official capacity, though many visits were paid to Arab countries.

“Israel generally performs well in bilateral relations and poorly in international blocs that are committed to the lowest common denominator,” Bechor opined in an article published last month on his website.

For Alderman, though, “Brexit comes down to a question of sovereignty,” he wrote. “As a religious Jew, I pray for the welfare of the nation. And that is why I shall be voting for Brexit on June 23.”