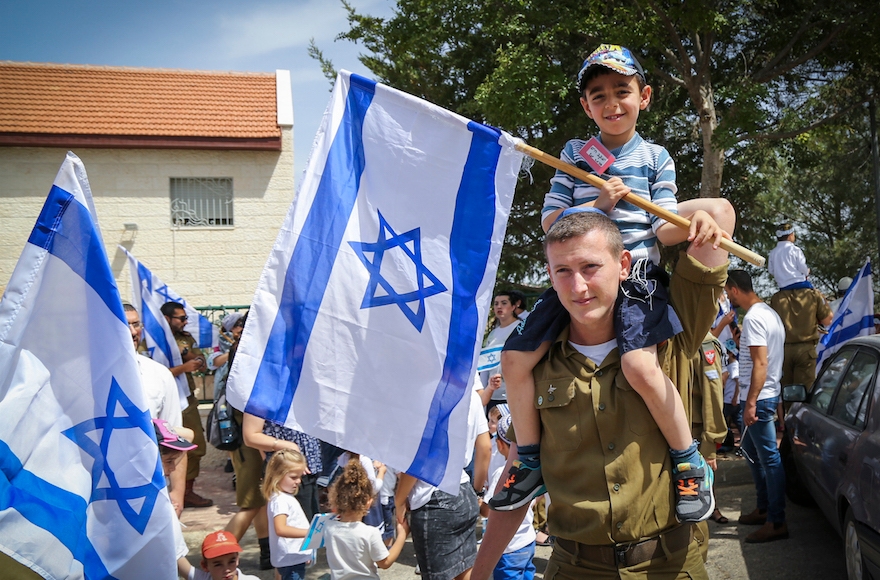 Israeli soldiers march with Kindergarten children from Efrat as they celebrate the upcoming 68th Independence in Efrat, Gush Etzion, May 9, 2016. (Gershon Elinson/Flash90)
Advertisement

(JTA) — The population of Israel has grown more than tenfold since the state’s establishment in 1948.

In statistics released to coincide with Israeli Independence Day, which begins Wednesday night, the Central Bureau of Statistics reported that Israel has 8.52 million residents, compared to 806,000 in 1948.

In the past year alone, Israel’s population has grown by 182,000, or 2.2 percent, thanks to a birthrate that exceeded the death rate, as well as the arrival of 36,000 immigrants.

Jews now make up 74.8 percent of the population and Arabs 20.8 percent. The remaining 4.4 percent are non-Arab Christians and people with no reported religion, mostly from the former Soviet Union.

According to the report, Israel is now home to 43 percent of the world’s Jews, compared to just 6 percent in 1948.

While the report includes Jewish settlers in the West Bank, who are Israeli citizens, it does not appear to count Palestinians living there. It is not clear whether the report counts Palestinians in eastern Jerusalem, who have been eligible for Israeli citizenship since Israel annexed the city in 1967. Also not clear is whether the 1948 statistic encompasses the entire area that had fallen under the British Mandate or just the area then under Israeli control. The “Green Line” borders of Israel were not finalized until 1949, after its War of Independence.

Among the other findings:

* Three quarters of the population was born in Israel, compared to 35 percent in 1948.

* Voting participation rates have declined since 1949, when 86.9 percent of the population voted, compared to 72.4 percent who voted in the most recent elections.