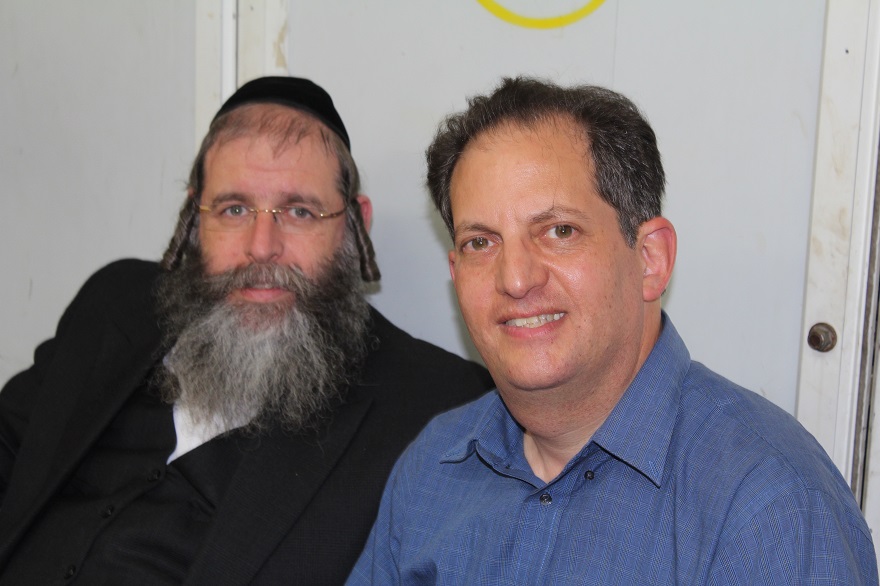 Hillel Kuttler, right, and Avraham Rechtshafer meeting at a Jerusalem pizza shop for the first time since the mid-1980s. (Hillel Kuttler)
Advertisement

JERUSALEM (JTA) – On a pleasant evening in this capital city, through the near darkness, I caught his wave from a half-block away. Soon we were standing together, smiling and clasping hands, two men who hadn’t seen one another for 31 years.

I was a Hebrew University graduate student for the 1984-85 term when Avraham Rechtshafer and his family — his parents, Shlomo and Bracha, and five siblings — hosted me for two Shabbat meals at their home a block from where I stood that moment. We were joined for the Friday night dinner in autumn and Saturday afternoon lunch in spring by several other students and travelers from the Diaspora, none of whom I knew.

We had all been approached at the Western Wall plaza by a one-time Chicagoan named Jeff Seidel, who eagerly recruited young people interested in breaking bread with traditionally observant Israelis. Seidel would assign a visitor or two or three to each host family, then hand an index card to the guests containing the family’s name and address. Seidel would explain how to reach each host on foot. All the hosts lived a 10- to 15-minute walk from the Old City.

I was dispatched to the Rechtshafers in the Beit Yisrael neighborhood, their street nearly bordering the better-known haredi Orthodox enclave of Mea Shearim. Upstairs in their apartment, they had set a beautiful table extending through the living room. A lively atmosphere pervaded each meal, with abundant food, enthusiastic singing of Shabbat songs and chatter.

The Rechtshafers are Hasidim of the Karliner sect. The family’s females ate in the kitchen, unseen except when bringing us refilled platters.

Some of the other visitors apparently had not experienced a traditional Shabbat before – perhaps some weren’t Jewish – and they engaged in a lively give-and-take with the Rechtshafers. Exposing visitors to the joys of Shabbat was the point of the program. My upbringing in a committed Jewish home included Shabbat meals, yet the Rechtshafers’ atmosphere entranced, as I had never entered a Hasidic environment.

Avraham and I gravitated to each other. Perhaps this eighth-generation Jerusalemite appreciated my speaking Hebrew. I was struck by his friendliness; his genuine smile projected warmth and openness.

What we talked about I don’t recall. But when I decided later that school year to again partake of the Shabbat-meal program, I requested the Rechtshafers. Seidel rewarded me with their card.

In the intervening decades, I have returned often to Israel and always to Jerusalem – even two or three times to Mea Shearim. Yet I had never thought to locate Avraham or invite him to schmooze.

READ: Can you help a kibbutznik find his American relatives?

On my most recent trip, for some reason, I sent Seidel a message on Facebook and he connected me with Shlomo Rechtshafer, who provided his son’s number. When I called, Avraham didn’t remember me. Still, he happily agreed to meet during my trip.

From the dark corner of Guardians of the Faithful and Tribes of Israel streets, Avraham and I crossed a few steps to Chaim Bar-Lev Boulevard, which before the Six-Day War divided Israel and Jordan and now splits Jewish and Arab neighborhoods.

I wondered, had Palestinian violence over the past several months hit Avraham’s neighborhood, too? The many observant Jewish mothers pushing strollers and young men rushing through alleys seemed terribly vulnerable, with no rifle-toting soldiers around to offer protection.

Avraham, a publisher of magazines catering to the observant community, claimed that things remained safe in Beit Yisrael.

We walked back down Guardians of the Faithful Street, veered right onto Rabbi Sonnenfeld Street and turned left down Karlin Hasidim Street, which was more like an alley. Across from the Mir Yeshiva, which Avraham called one of the largest in the world, we entered a pizza shop. Avraham shook a young man’s hand, asking whether he’d be coming over for Shabbat lunch that weekend.

The teenager, a son of Avraham’s childhood friend who moved to New York decades ago, is in Israel this year to study at the Mir. Like the namesake patriarch, Avraham has an open-door policy.

That was his parents’ approach when I had eaten there, Avraham explained as we sat and sipped soft drinks.

“My father would sometimes pray at the Western Wall, and Baruch Levine [who ran the program with Seidel] was looking for host families so that people could experience Shabbat,” he said.

“So we knew that every Friday night and Shabbat lunch we’d have guests,” Avraham said.

“I remember it as an interesting experience. We met people, never from the same place. It could be one person from Minnesota and one from Indiana. It was very exciting. We’d meet Jews from all over the world. At yeshiva the next day, classmates would ask me where our new guests came from,” he said, flashing the engaging smile now framed by a peppery beard and mustache.

“We could show them that haredi life is a fun life. With the good food, we made a nice impression throughout the person’s life. People would ask, and we’d explain things.”

READ: See who a Koufax teammate discovered in England

“But 20 years later he’ll remember, and it’ll give him a warm feeling about Judaism,” Avraham said.

As to my finding him?

“It figures that you’re a journalist, since you’d have to be curious and know how to find someone,” he had said by telephone a month earlier, stunned I remembered him.

As we chatted on this evening, Avraham’s phone buzzed incessantly with messages from colleagues asking to finalize page layouts before an issue went to press. A man stopped by, a hand out for charity. Avraham pulled a five-shekel coin from his pocket and extended it.

Avraham leads a busy life. He drives 45 minutes each way to work, studies an hour of Torah each morning and evening, and with his wife, Sarah, raises three children. Three older kids are married, and the Rechtshafers have one granddaughter.

“If you’re organized, you can do it all,” he said.

The couple’s lifestyle includes welcoming guests, following the lead of his parents, who on this evening were out of town.

“I’ve never forgotten those experiences – not at all,” Avraham said. “That table was so interesting. To this day, I love hosting people.”