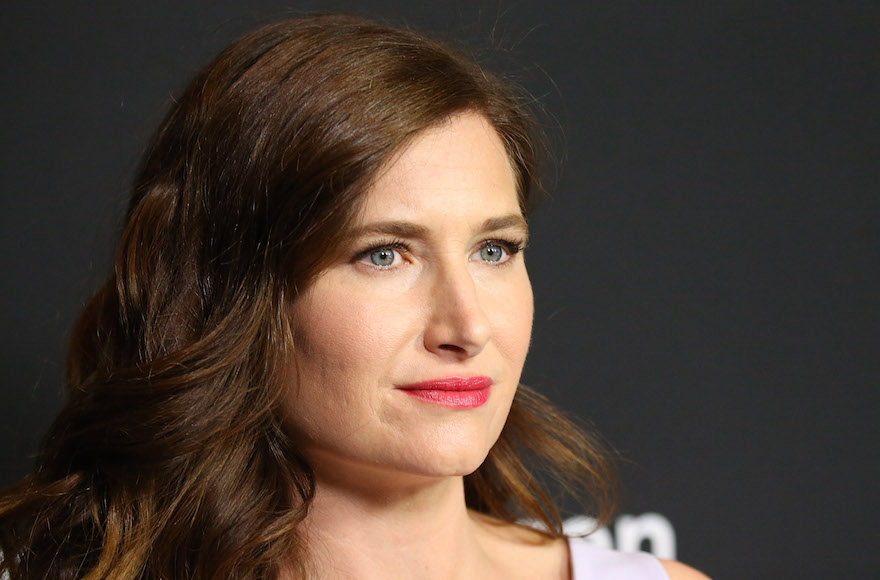 Kathryn Hahn’s no rabbi, but this nice Catholic girl from Cleveland plays one on TV. As Rabbi Raquel Fein on “Transparent,” the groundbreaking Amazon series about a dysfunctional Jewish family with a transgender parent (Jeffrey Tambor), Hahn has spent a lot of time thinking about what it means to be Jewish.

On Monday, Hahn was in New York to host the annual gala of T’ruah: The Rabbinic Call for Human Rights  —  where she helped honor some real-life rabbis (and one crusading lawyer) as “human rights heroes.” Hahn talked with JTA before the T’ruah event about how she landed the role of rabbi, what she loves about Judaism and her own religious background.

JTA: What made you decide to audition for the role of a rabbi?

Hahn: The odd thing about this is that Jill Soloway [the executive producer of “Transparent”] wrote this part for me knowing full well that I was not Jewish. We had already worked together in “Afternoon Delight,” where I played more of a cultural Jew, like the Pfeffermans [the family at the center of “Transparent”].

When Jill talked to me about this role, I thought, My God, a rabbi! I’m so overwhelmed and intimidated. It was one thing to be someone who was ambivalent as a Jew. But I had no frame of reference about being a rabbi.

How did you prep for the part?

Jill hooked me up with Rabbi Susan Goldberg of the Wilshire Boulevard Temple. Rabbi Goldberg has been my touchstone and my everything from the beginning. I’ve learned so much and have so many more questions.

Looking at a Torah or something was going to be too overwhelming. As an actor, I needed a way though to the heart, something more visceral. I just wanted to feel rooted. Susan and I had a few meals together, and I learned that she was a modern dancer first and had a whole life before rabbinical school. But what I took from her was her sense of self and her eye contact. For some reason eye contact was my way in. I tend not to look into people’s eyes; I’m always looking down or away. But the way she makes eye contact with you is unnerving at first and then just feels like she’s cradling you. I practiced looking people directly in the eye.

Do you come from a religious family?

I was brought up Catholic in Cleveland, Ohio, though I was more like a cultural Catholic. I went to Catholic school all the way though high school mostly because it was the cheapest private school option. My relationship with my spirituality was very community based: I sat in church. I certainly pushed it away when I became a teenager. I didn’t buy it. I have two gay uncles, I didn’t like the exclusion of the church, I had a lot of questions.

Did playing a rabbi on ‘Transparent’ change your own feelings about spirituality?

Working with Susan, being in my 40s and a mom, and my husband is Jewish, I really responded to the idea of having a personal relationship with God, having a direct line and it not being something I had to go to a priest to confess, just to have a direct relationship. For someone who was so indoctrinated [in Catholicism], that was something that was really in a small way revolutionary. I didn’t know Judaism had that. Playing a rabbi on this show has changed me in so many ways I can’t articulate. It’s perfect timing for me in my life as a mom with two kids and wandering spirituality. That individual relationship with God is huge for me.

What was your experience with Judaism before this role?

My image of Judaism had been very male-oriented. I grew up in close quarters with the Orthodox community in Cleveland.

Did you know there were female rabbis?

I did not. I guess I assumed there were, but I thought it was a very fringe thing.

“Transparent” seems to be as much about a Jewish family as it is about a family figuring out what it means to have a trans parent.

It’s about a family and they happen to be Jewish and the parent happens to be a transgender woman. I think it falls into place. There’s no separating it on the show.

On so many TV shows with rabbis or overtly Jewish roles, the characters seem like caricatures. But there’s an authentic tone to the Jewish characters on “Transparent.”

To Susan’s credit, she’s kind of our adviser on the show on all things Jewish, and because she is a rabbi she is an incredible thinker and a beautiful mind. She blesses the beginning of the season, and it does feel we’re doing something sacred and not silly. It feels rooted deeply to this show.

In Season 2, the most recent season of “Transparent,” your character breaks up with Josh, the son of Jeffrey Tambor’s trans character. Is this the end of the road for you on “Transparent”?

I will be on the show next season.