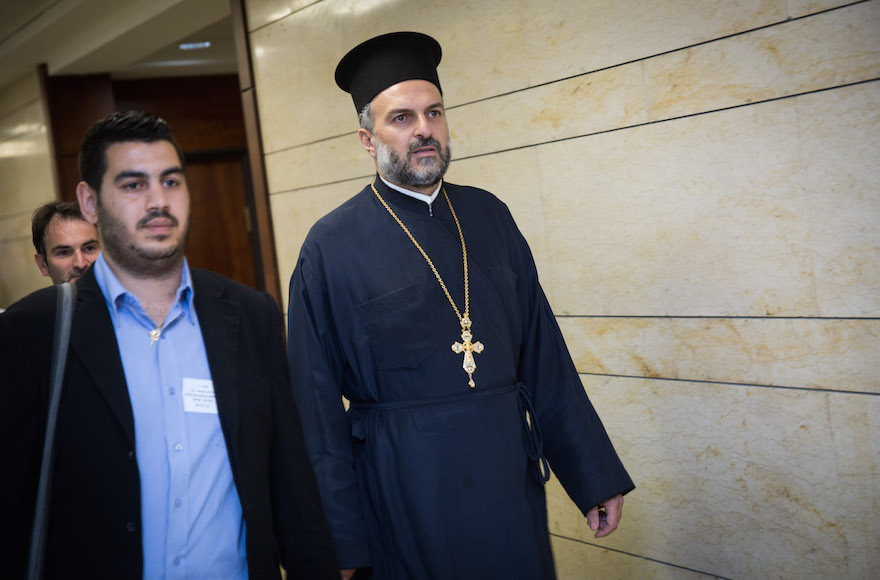 JERUSALEM (JTA) —  A Greek Orthodox priest selected to light a torch at the Independence Day national ceremony in Israel has been accused of sexual harassment of the young people he has helped.

The charges against Father Gabriel Naddaf surfaced this week in the Israeli media and were first reported on Sunday by Israel’s commercial Channel 2. The report also accused Naddaf of soliciting bribes for assisting Palestinians in getting permits to enter Israel and interceding with Israeli officials in other cases.

Naddaf is being honored for his efforts since 2012 to encourage Christians in Israel to enlist in the Israel Defense Forces and integrate into society.

The decision is driving a wedge in the country’s small Christian-Arab community, The Associated Press reported Wednesday, hours before Naddaf was to take part in the torch-lighting ceremony that marks the start of Yom Haatzmaut, or Israel Independence Day. Fourteen people from all walks of Israeli life were chosen to light torches this year.

Christian Arabs make up about 2 percent of the country’s population.

Naddaf has denied the claims, saying their timing indicates “intentions to harm me personally and to also harm the lighting of the torch.”

On Tuesday, a discharged Christian Israeli soldier, who also claimed exploitation by the cleric of his position as a priest and spiritual leader of the Christian community, filed a sexual harassment complaint against the priest, The Jerusalem Post reported. The soldier’s attorney told the newspaper that at least one more former soldier was planning to file a similar lawsuit.

Police said they have begun a preliminary investigation into the claims against Naddaf.

“I will light the torch with great pride for the glory of the state of Israel and for the good of the Christians in Israel,” Naddaf, 43, told The Associated Press.

His agreement to light the torch is also controversial in the Arab community for political reasons, though he is not the first Israeli Arab to light a torch.

“When Gabriel Naddaf stands on stage during Independence Day in Jerusalem, he will light the torch in the name of Gabriel Naddaf and not in the name of the Christian Palestinians inside the Israeli state,” said Azmi Hakim, an Orthodox Christian activist in the Arab city of Nazareth, told AP. “We are part and parcel of the Palestinian people and … we don’t celebrate Independence Day.”