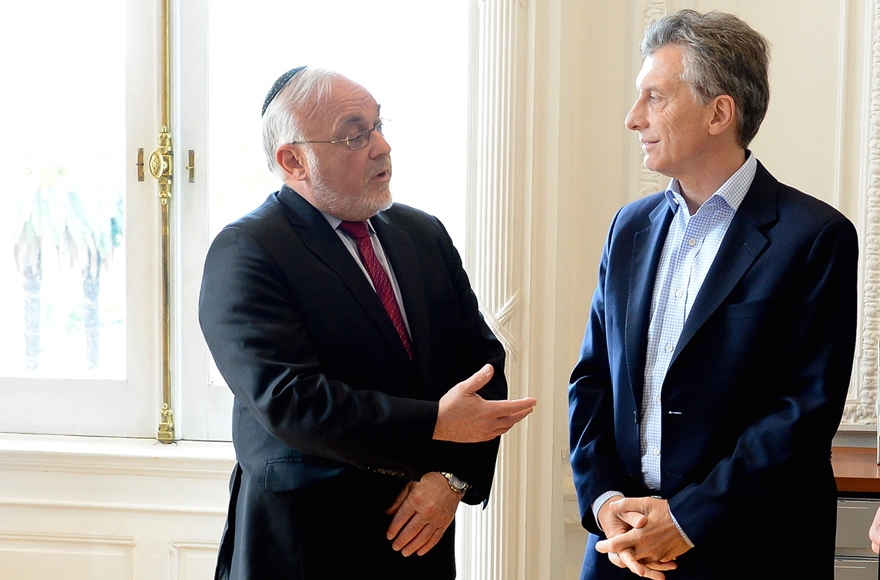 Argentine President Mauricio Macri, right, and Rabbi Abraham Cooper, associate dean of the Simon Wiesenthal Center, speaking in Buenos Aires on May 12, 2016. (Courtesy of the office of the President of Argentina)
Advertisement

BUENOS AIRES (JTA) — A Jewish human rights group asked the president of Argentina to help prevent a planned visit to Colombia by an Iranian implicated in terrorism.

Shimon Samuels, the Simon Wiesenthal Center’s director of international relations, conveyed the request Thursday in a meeting with President Mauricio Macri at the government palace here. Mohsen Rabbani, a former Iranian cultural attaché in Argentina, is scheduled to visit Bogota as a representative of the Iranian government in a delegation seeking to increase trade.

Rabbani has been wanted by Interpol since 2007 in connection with the 1994 bombing of the AMIA Jewish community center in Buenos Aires. He was implicated in that attack by the Argentinean government, whose judiciary determined Iran had a role in planning and carrying it out. Eighty-five people died in the blast.

“A free sanctions Iran mixed with a commercial-needy Latin America is a very dangerous combination,” Samuels said. “After the commercial missions, terror will follow.“

In recent years, Iran expanded its activity in Latin America, including the 2014 opening of a news agency based in Buenos Aires devoted to covering the continent.

Also in 2014, the Israeli government launched a three-year plan to strengthen its economic ties with five Latin American countries, including Colombia.

Colombian President Juan Manuel Santos received in 2012 the Shalom Prize by the World Jewish Congress. Early this year, Colombia’s ambassador to Washington, D.C., held a reception in honor of WJC President Ronald Lauder, who called Colombia a friend of Israel.

During their meeting, the Simon Wiesenthal Center delegation asked Macri to reverse Argentina’s vote in favor of a resolution passed by UNESO in April that Jewish groups and Israel said ignored the Jewish people’s ties to Jerusalem.