After senior commander is killed in Syria, Hezbollah announces probe 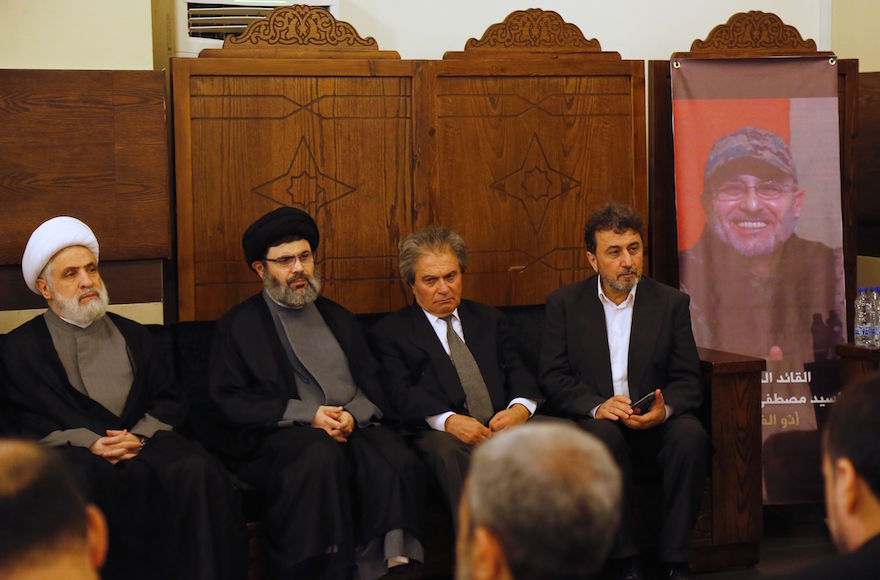 From left to right: Lebanese Hezbollah deputy chief Sheikh Naim Qassem, head of the Hezbollah Executive Council Sayyed Hashem Safieddine, and the brothers, Annan Badreddine and Hassan Badreddine, of top Hezbollah commander Mustafa Badreddine who was killed in an attack in Syria, receive condolences in a southern suburb of Beirut, May 13, 2016. (Anwar Amro/AFP/Getty Images)
Advertisement

(JTA) — A senior Hezbollah commander was killed in an explosion in Damascus, triggering a probe by the group amid speculation about Israel’s alleged involvement.

Mustafa Amine Badreddine died in a large explosion on Thursday night near Damascus airport, the Lebanon-based militant group said in a statement on its al-Manar website. According to the statement, which did not mention Israel, Hezbollah was working to determine who and what caused the blast, BBC reported.

The Lebanese TV station al-Mayadeen was among the Lebanese and international media that claimed the blast was carried out by Israel, which is widely believed to have assassinated several Hezbollah figures in recent years, including Hezbollah military commander Imad Mughniyeh in 2008 and his son, Jihad Mughniyeh, last year.

Israel has neither confirmed nor denied its involvement in these killings and other attacks on the Shiite terrorist group.

Ron Ben Yishai, an expert on Lebanon and senior military correspondent of the Israeli daily Yediot Acharonot, wrote in an analysis that Badreddine’s death may be unconnected to Israel and part of Hezbollah’s bloody war against Sunni militias working to overthrow the government of Syrian President Bashar Assad, an ally of Hezbollah.

According to Yediot, Israel believed that Badreddine, who is among three top commanders who replaced Imad Mughniyeh, is implicated in the deadly bombing of the AMIA Jewish community center in Argentina in 1994 and an attack on Israeli tourists in Bulgaria in 2012.

But Badreddine had other enemies, including militias seeking revenge for his suspected involvement in the assassination in 2005 of former Lebanese prime minister Rafic Al Hariri, Ben Yishai wrote.

Hezbollah began sending thousands of troops to Syria in 2013 to help Assad fight Sunni rebels. According to Guy Bechor, an Israeli Middle East expert monitoring the group, Hezbollah has lost close to 2,000 fighters — an estimated 10 percent of its fighting force — in the war. In parallel, dozens have died in a series of bombings in Shi’ite neighborhoods of Beirut understood to be payback by Sunnis against Hezbollah.

Badreddine, 55, studied for a bachelor’s degree in international relations in the American University in Beirut between the year 2002-2004, using the alias Sami Isha, according to Ynet.