Bill Clinton: ‘I killed myself to give the Palestinians a state’ 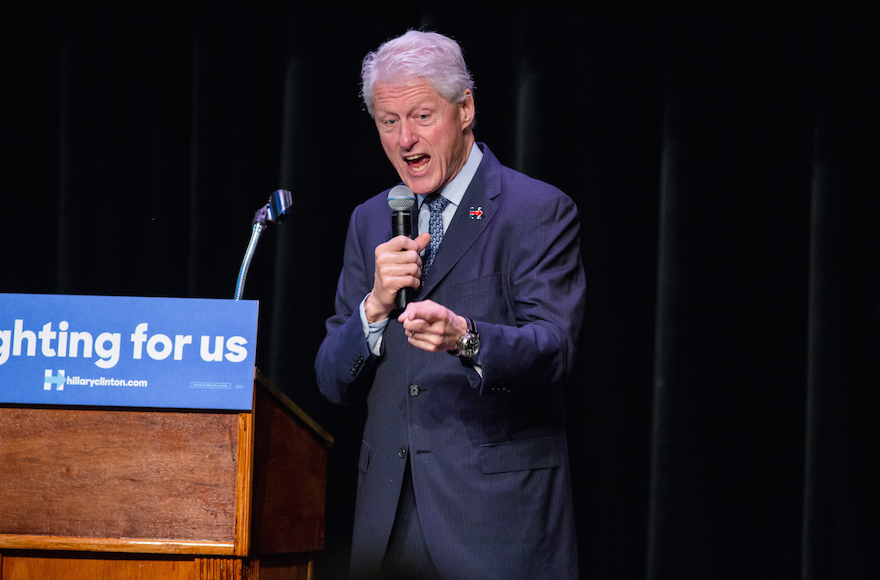 (JTA) — Saying “I killed myself to give the Palestinians a state,” former President Bill Clinton defended his record on Israeli-Palestinian peace efforts, and his wife’s, at a campaign event.

“I had a deal they turned down that would have given them all of Gaza,” Clinton said Friday in response to a heckler at an event in New Jersey in support of Hillary Clinton’s presidential campaign, Politico first reported.

The former president also commended Hillary Clinton, who as secretary of state during President Barack Obama’s first term from 2009 to 2013 pressed Israeli Prime Minister Benjamin Netanyahu and Palestinian Authority President Mahmoud Abbas to meet and make peace, and defended her against the heckler who pointed out that she said “neutrality is not an option” in dealing with the Israeli-Palestinian conflict.

“There’s nobody who’s blameless in the Middle East, but we cannot really ever make a fundamental difference in the Middle East unless the Israelis think we care whether they live or die. If they do, we have a chance to keep pushing for peace,” Clinton said. “And that’s her position. Not to agree with the Israeli government on everything, not to pretend that innocents don’t die, not to pretend that more Palestinian children don’t die than Israeli children. But that we can’t get anything done unless they believe, when the chips are down, if somebody comes for them we will not let them be wiped out and become part of the dustbin of history.”

Bill Clinton also condemned Hamas for locating its rocket launchers in civilian areas, leading to higher casualties during Israel’s 2014 war with the terrorist group in Gaza.

“Hamas is really smart. When they decide to rocket Israel, they insinuate themselves in the hospitals, in the schools, in the highly populous areas, and they are smart,” Bill Clinton said to audience applause, according to Politico.

“They said they try to put the Israelis in a position of either not defending themselves or killing innocents. They’re good at it. They’re smart. They’ve been doing this a long time.”