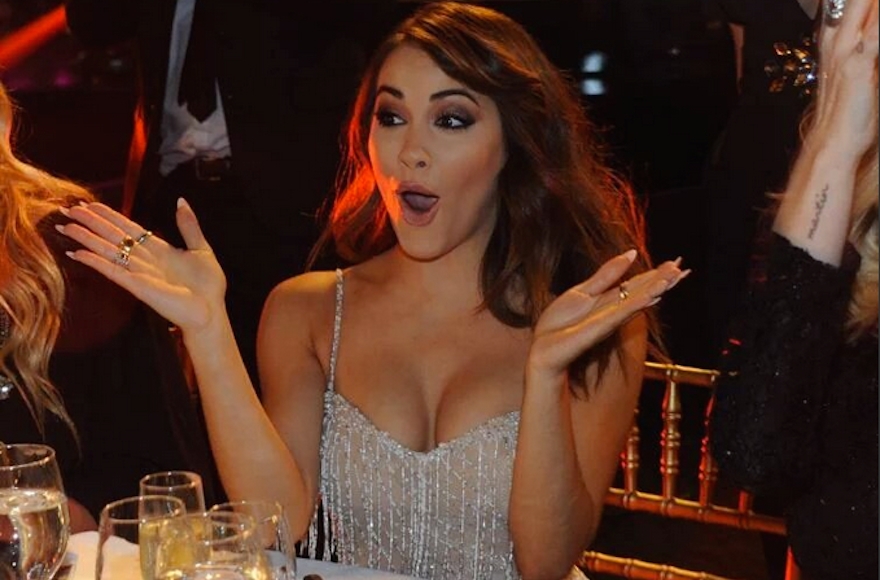 The dress by Julie Vino was first unveiled to the actress’ 4 million Twitter followers and on Instagram Sunday night before the ceremony in Buenos Aires and climbed to second in an ongoing poll about the best dress of the night that included thousands of voters from the infobae news website.

“One of the most impactful and shocking looks,” the La Nacion newspaper reported.

Esposito performed in Tel Aviv in April and bought the dress during her trip, her eighth in Israel.

On the day of her show she sent a moving video message to teen Israeli fan Eden Dadon, who had been seriously injured a week earlier in a terror attack in Jerusalem. She received the Friend of Zion Friendship award from Ilan Scolnik, director of the Jerusalem-based Friends of Zion Museum, and sang “Ma Nishtana” during an interview.

The 46th edition of the awards featured a video tribute to the late Argentine Jewish TV host and producer Gerardo Sofovich, who on his popular programs often mentioned the Jewish holidays and sent greetings in Yiddish. The tribute, which was welcomed with a standing ovation, ended with “Thanks Ruso,” Sofovich’s  nickname, which means “the Russian” in popular slang used by Jews in Argentina.

Sofovich wrote and directed 11 movies, acted in two and wrote two screenplays, and served as the host of more than 20 television programs.

Among the winners of Argentine entertainment’s most prestigious awards were Jewish journalists Jonatan Viale and Debora Plager.