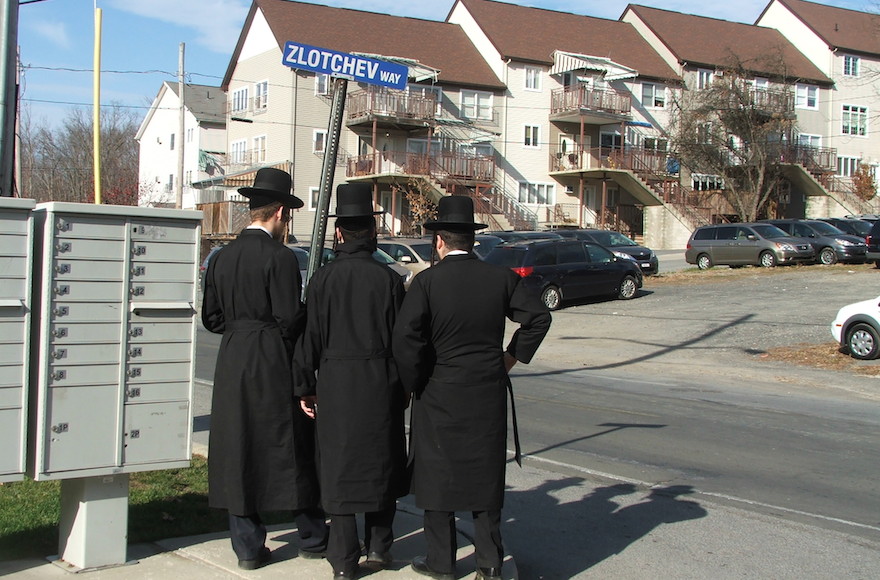 The Satmar Hasidic village of Kiryas Joel has been the subject of two FBI raids in two months, lending to a sense of siege in the insular community. (Uriel Heilman)
Advertisement

NEW YORK (JTA) – Even before FBI investigators descended last week on the Satmar Hasidic village of Kiryas Joel, there was a growing sense in this insular community that it and its unique way of life were under attack.

Two months earlier, the FBI had been in the village investigating alleged fraud of a government program, and community leaders also have been facing a mounting campaign by dissidents to increase state oversight of yeshiva curricula.

“We need to know what kind of danger we’re in,” the Satmar rebbe in Kiryas Joel, Rabbi Aaron Teitelbaum, said in a widely publicized May 4 speech about the threat of closer state supervision of yeshiva curricula. “These are bad times for us Jews, terrible. We need to pray to God that they should not interfere with the upbringing of our children.”

In last week’s FBI raid, investigators confiscated computer equipment and boxes of documents from the village’s Department of Public Safety and its main yeshiva, United Talmudical Academy. An unnamed law enforcement source interviewed by a local newspaper, the Journal News, said the raid was related to the publication on social media two weeks ago of a leaked hidden-camera video that appeared to show a principal of the yeshiva kissing and grasping young boys in his office. Some 6,000 students are enrolled in the school.

Publication of the video, which generated a firestorm in Orthodox circles, came the same week that a New York State legislator, Ellen Jaffee, introduced a bill that would bring better enforcement of state rules that require non-public schools, including yeshivas, to ensure they are providing education that is “substantially equivalent” to that offered in public schools. Yeshivas like those in Kiryas Joel, located about an hour north of Manhattan in New York’s Orange County, long have flouted state standards on secular subjects, foregoing even basic subjects like English and math in upper grades.

For a long time, Teitelbaum said in his speech, there’s been an implicit understanding between state authorities and the leadership of Hasidic communities like Kiryas Joel that the state wouldn’t interfere in communal affairs.

But that implicit agreement may be breaking down as it becomes more difficult for authorities to ignore abuses – sexual, educational or financial – allegedly taking place within these closed communities. The prospect of outside interference threatens one of Kiryas Joel’s raisons d’etre: Hasidic control of the community’s affairs.

“Until now there were also strict laws, but because we live in a kingdom of benevolence [a reference to government authorities] to put it bluntly they simply turned a blind eye to what’s going on by the Jewish children,” Teitelbaum said in his speech, which was delivered in Yiddish and then translated into English for widespread dissemination. “They didn’t want to look, the benevolent kingdom. Now, too, they’d continue doing that, the government would have continued, they’re happy not to look and not to know. But these worthless people are stirring up in various ways and are demanding in court, forcing the government that they should take a stance.”

The newfound scrutiny is being pushed largely by dissidents, in some cases ex-Hasidim, who say they are acting in the best interests of the community – whether to protect children from sexual abusers or to give them the basic educational skills necessary to succeed in life.

“I’ve been to those yeshivas, I know exactly what the effects are,” said Naftuli Moster, executive director of Yaffed, an organization he founded that lobbies lawmakers to force Orthodox yeshivas to offer quality secular studies in addition to Torah studies.

“You’re not gaining anything by depriving people of an education. The very Satmar rabbi that made that speech also encourages people to earn a living, to his credit, but at the same time he’s the one who has jurisdiction over the yeshivas that are depriving Hasidim of the very tools necessary to earn that living,” Moster told JTA. “So what do people end up doing? Oftentimes they resort to criminal activity and other shenanigans to earn that living.”

Two months ago, FBI investigators were in Kiryas Joel, nearby Rockland County and Brooklyn investigating alleged fraud by Hasidic institutions in the federal government’s E-rate program, which funds the purchase of technology equipment and internet service by schools and libraries. Authorities reportedly are looking into whether the yeshivas actually spent the money they obtained from the federal government for technology in the schools. 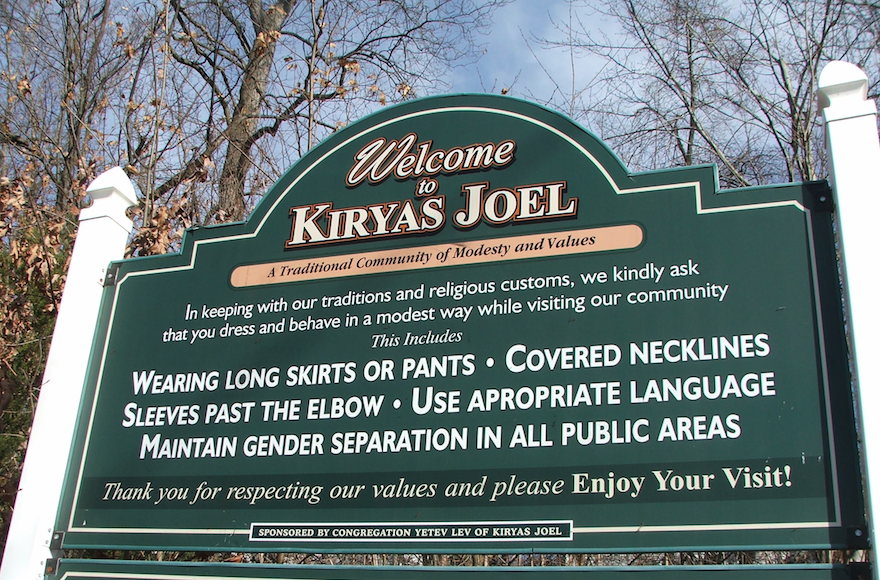 The Satmar Hasidic village of Kiryas Joel has been the subject of two FBI raids in two months, lending to a sense of siege in the insular community. (Uriel Heilman)

Adding to the pressure, on Tuesday, the New York Daily News and WNYC public radio published and broadcast a joint investigative story scrutinizing the outsized number of low-income, Section 8 housing vouchers that have gone to the Hasidic community in the Williamsburg section of Brooklyn – a Satmar neighborhood with close ties to Kiryas Joel.

The WNYC story attributed the voucher aberration to Hasidic “self-dealing that’s impenetrable to outsiders” and cited lawsuits arguing that the Hasidim obtain housing vouchers through unfair or unlawful means. The story also noted that Hasidim are taking the vouchers with them to places outside the city, like Kiryas Joel.

This perfect storm of scrutiny has community leaders on edge. In his speech, Teitelbaum expressed fury that fellow Jews are the source of much of the pressure.

“Due to our many sins, it’s very painful to talk about it, there stood up several worthless people from our own who have studied in Hasidic yeshivas, and sadly they arrived I don’t want to say where. They decided to wage war against the whole ultra-Orthodox Jewish community of New York,” the rebbe said. “They went and snitched to the governments of New York City and New York State with complaints that the students of the yeshivas, of all yeshivas (elementary and middle school) are not learning enough general studies as required by law.”

Yaffed’s Moster is a Brooklyn native who grew up in Hasidic institutions. The sex abuse video presumably was recorded by an insider at United Talmudical Academy and was posted on Facebook by Boorey Deutsch, an Orthodox activist against sex abuse in the community. The alleged E-rate fraud was the subject of investigative stories in 2013 by the New York Jewish Week and the Forward.

Joseph Waldman, a longtime Kiryas Joel community leader who heads a local welfare organization, said the unprecedented assault on the Hasidic community stems from local non-Jews’ fear of its rapid growth – just as the biblical Egyptians feared the rapid growth of the Israelites in Moses’ time.

“That’s the reason they were trying to make the trouble for the Jews in Egypt: The first thing they were afraid was the Jewish families growing so rapidly,” Waldman told JTA. “Here, they are fearful that they’re going to be overwhelmed either by the growth of the environment or by political clout through the bloc votes.”

“They want to stop the community from growing,” he said. “That’s the reason for all the problems.”

How to build an American shtetl — See: Bloomingburg, N.Y.