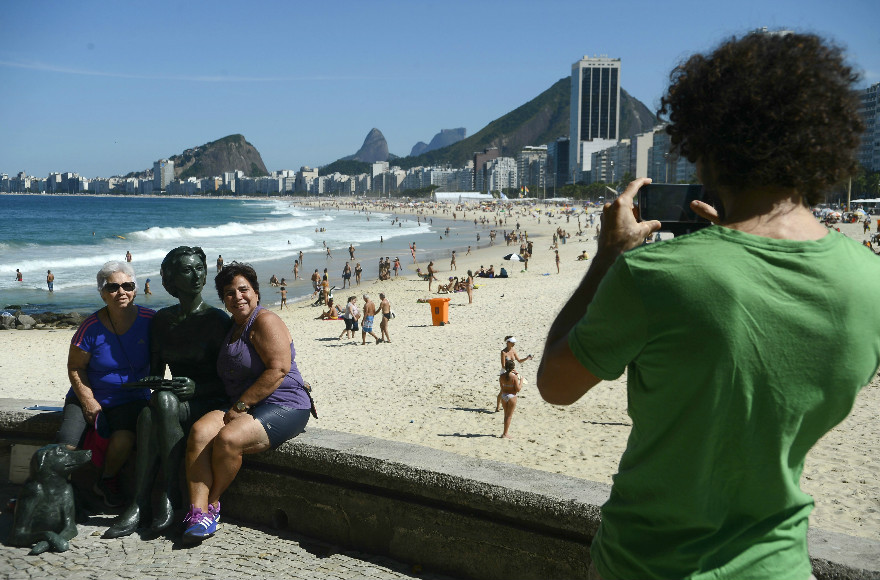 RIO DE JANEIRO (JTA) — A statue of Clarice Lispector, a celebrated modernist author in Brazil, has become a popular photo spot in Rio since its inauguration on Sunday.

Born in Ukraine in 1920 and later naturalized a Brazilian citizen, Clarice Lispector has been described as among the most important Jewish writers since Franz Kafka. Acclaimed internationally for her innovative novels and short stories, with few overtly Jewish references, she was also a journalist.

The real-size bronze statue of the Jewish writer and her dog is located in Leme, the continuation of Copacabana beach. It was proposed by Lispector’s biographer, Teresa Monteiro, and gained support from actress Beth Goulart, who impersonated her on stage. In order to gather the funds to build the statue, sculptor Edgard Duvivier created 40 miniatures that were sold to fans.

For nine years, Monteiro has led the guided tour “Rio of Clarice,” which takes guests to the writer’s favorite places. At the Botanical Gardens, Monteiro managed to create the Clarice Lispector park, where the benches are engraved with some of the writer’s most famous excerpts.  A biography of Lispector is expected to be released soon.

“The project does not intend only to promote Clarice’s memory, but to establish a bond with the city and the citizenship,” Monteiro told Terra news portal.

Lispector’s statue is the fourth bronze statue along the extended Copacabana promenade, including those of the celebrated poet Carlos Drumond de Andrade, composer Ary Barroso, and singer-composer Dorival Caymmi.

Lispector was born in Chechelnik, Podolia, a shtetl in what is today Ukraine. Her family suffered from virulent anti-Semitism during the Russian Civil War, when her mother was raped by Russian soldiers in one of the pogroms that killed 250,000 Jews in 1918. They migrated to Brazil when Chaya was 1 year old and later had her name changed to Clarice. In Recife, the family was active in the local Jewish community. They later moved to Rio.

She is popular among critics internationally as well. Routinely compared to Jorge Luis Borges, Vladimir Nabokov, and James Joyce, Lispector is hailed by many literati as Brazil’s greatest contemporary writer. In time she would become one of the most celebrated modernist authors in Brazil, developing in her first published work “Near to the Wild Heart” many of the techniques employed by James Joyce, William Faulkner or Virginia Woolf, the latter being the name most frequently associated with Lispector’s writing.

Lispector’s narratives follow closely the inner lives of her protagonists, chronicling their feelings and emotions using the stream of consciousness technique. In 1959, she began producing her most famous works, including the stories of “Family Ties,” the great mystic novel “The Passion According to G.H.,” and Agua Viva.” She died in 1977.

Lispector has been the subject of numerous books, and references to her and her work are common in Brazilian literature and music. Several of her works have been turned into films. In 2009, the American writer Benjamin Moser published “Why This World: A Biography of Clarice Lispector.”

Since that publication, her works have been the object of an extensive project of re-translation, published by New Directions Publishing and Penguin Modern Classics, the first Brazilian to enter that prestigious series.