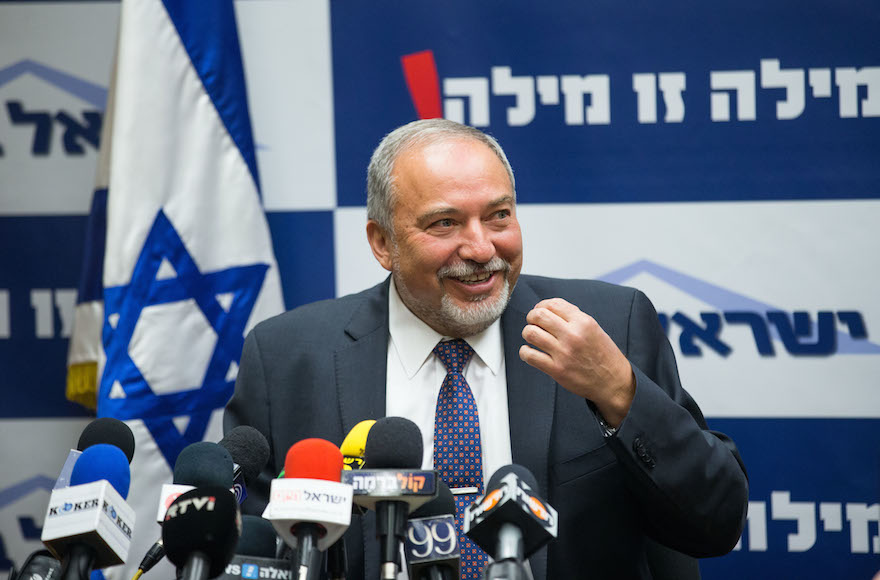 Then, according to media reports, Netanyahu swung to the right and instead embraced an old partner: Avigdor Liberman, head of the hard-line nationalist Yisrael Beiteinu party. Liberman, formerly the foreign minister, now will reportedly replace Moshe Yaalon as defense minister.

“If we receive a response on the issues we’ve discussed, there’s something to talk about,” Liberman said in a news conference Wednesday. “If it’s true that we’ve been offered the defense portfolio, a death penalty for terrorists, pension reform and more, as I’ve heard, that’s a serious offer we can discuss.”

The addition of Yisrael Beiteinu to the government would be a boon to Netanyahu, as well as a return to the ideologically coherent right-wing coalition he headed until 2013. Before Netanyahu and Liberman reportedly came to a tentative agreement Wednesday, Israel’s coalition held the narrowest of majorities — 61 of the Knesset’s 120 seats. The two-seat advantage meant, practically, that the coalition was beholden to the whims of each of its members.

The new coalition would boast 67 seats, providing an added measure of stability. With Liberman serving again as a minister, Netanyahu has reunited with a man once seen as his possible successor. Liberman served as Netanyahu’s foreign minister from 2009 to 2015, and the two ran on a victorious joint slate in the 2013 elections.

Netanyahu “needs an integrated government, a stable one,” said Bar-Ilan University political science professor Shmuel Sandler, who added that a union with Herzog could create discord, dooming the government.

Netanyahu had sought Liberman as a partner since after the most recent elections in March 2015. But Liberman had criticized Netanyahu harshly over what he saw as his tepid conduct of the 2014 Gaza war. As coalition negotiations ended last year, Liberman chose to sit in the Knesset opposition, claiming the new government would not abide his hawkish principles.

“We refused to join the 34th Netanyahu government because of the same issues of principle we’d talked about,” Liberman said in a news conference ahead of Wednesday’s deal.

Netanyahu had engaged in increasingly serious talks recently with the rival Labor Party. Labor chairman Isaac Herzog, whose poll numbers have only fallen since the 2015 elections, appeared eager to join the government. He hoped to serve as foreign minister and push Israel toward renewed negotiations with the Palestinian Authority.

Herzog’s peace process ambitions were boosted when President Abdel Fatah el-Sissi of Egypt said Tuesday that his country would “make every effort” to help the Israelis and Palestinians reach peace. But Herzog faced vocal opposition within his own party to joining the coalition. About half of his 24-member Knesset delegation criticized the move, accusing him of selling out the party and bolstering a rival. He will likely face a strong challenge in Labor’s leadership primaries, which are expected to be scheduled soon.

Now it seems Herzog is left in the cold while Israel’s government, rather than tacking to the center, becomes even more staunchly right-wing. Liberman’s appointment would mean the ouster of the current defense minister, Moshe Yaalon, who had attempted to be a voice for moderation against critics to the government’s right.

“Today is the day he gave up on the chance to lead a great change in our future,” Herzog said of Netanyahu in a Wednesday night news conference. “We will not give the crazy government of Liberman and [Education Minister Naftali] Bennett a day of silence. I will unite all the forces to turn their lives into a nightmare until we replace them.”

Yaalon drew verbal fire from far-right activists after criticizing the soldier who killed an immobilized terrorist in Hebron in March. This month, he and Netanyahu clashed after Yaalon defended Israel Defense Forces Chief of Staff Yair Golan, who in a Holocaust Remembrance Day speech compared aspects of Israeli society to trends that occurred in 1930s Germany.

Liberman would be the first defense minister who has not served as an IDF chief of staff since Amir Peretz, whose tenure from 2006 to 2007 is widely considered a failure. Former Prime Minister Ehud Barak followed Peretz, and Yaalon, who also served in the IDF’s top post from 2002 to 2006, succeeded Barak.

But though Liberman lacks Yaalon’s experience, the pro-settler Jewish Home party, another coalition member, cheered Yaalon’s exit, calling the imminent government “the most right-wing ever in Israel.”

“Bogie is leaving, and that’s good,” Jewish Home said in a statement Wednesday, using Yaalon’s nickname, according to Israeli media reports. “This was a year of tremendous damage to the IDF. A year of abandoning soldiers, a year of a horrible culture in the army. Bogie needs to go home, and he’s going.”